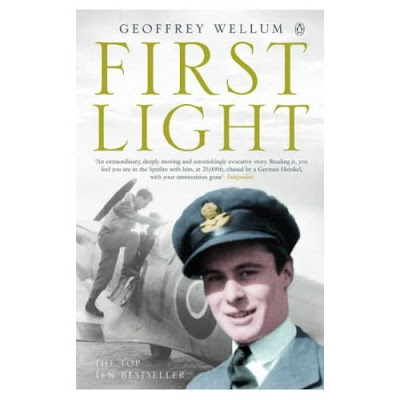 Up here the air is pure and clean. The sheer joy of flight infiltrates the very soul and from above the earth, alone, where the mere thought in one's mind seems to transmit itself to the aeroplane, there is no longer any doubt that some omniscient force understands what life is all about. There are times when the feeling of being near to an unknown presence is strong and real and comforting. It is far beyond human comprehension. We only know that it's beautiful.

Things are starting to get rough. Automatically I have followed my self-imposed drill that I always do at times like this. reflector sight on; gun button to fire; airscrew pitch to 2,650 revs; better response. Press the emergency boost override, lower my seat a notch and straps tight. OK, men, I'm all set. Let battle commence. Please, dear God, like me more than you do the Germans.

"Watch that bastard behind you, Yellow 2. He's close, boy, real close. Break Yellow 2, break you clot, break!"
There's even humour over the R/T and I laugh hysterically, confused and lonely.
"Blue leader, can you give me a hand? I'm just off to your starboard somewhere."
"Sorry, old boy, I've got three 109s on to me but don't worry, I've got 'em surrounded."

I reckon I'm a little above, just a fraction, and therefore gaining. God, I hope so. Coupled with fear, I now also feel a sense of anger. What right has this German to fly his snotty little aeroplane over our England and try to kill me? Who invited him? Just because he's stupid enough to believe his bloody Fuhrer and his master-race-dominating-the-world crap, he flies for his wretched Fatherland and tries to impose typical Teutonic bullying on our country. The bloody arrogance of it! Well, you'll not shoot me down you black-crossed sod.

No amount of training can prepare you for mortal combat. One has to realize before take-off that in order to have any chance of surviving and coming through you must remember a simple and straightforward golden rule: Never, but never fly straight and level for more than twenty seconds. If you do, you'll die.

First of all, I just have to say that I loved this book so much that I deliberately stretched the reading out to make it last as long as possible - at least, till I got close to the end. Then, of course, I got that itch to finish. However, the book was so utterly wonderful that I can't even begin to imagine parting with my copy.

First Light is the memoir of an RAF pilot who served during the Battle of Britain. At 17, two months before the outbreak of WWII, Geoffrey Wellum began training to become a fighter pilot. I like this part of the cover blurb: "Bursting with youthful energy and enthusiasm, he makes it through basic training to become the youngest Spitfire pilot in the prestigious 92 Squadron. Thrust into combat almost immediately, Wellum finds himself flying several sorties a day, caught up in terrifying dogfights with German Me 109s. Over the coming months he and his fellow pilots play a crucial role in the Battle of Britain. But of the friends that take to the air alongside Wellum, many never return." And then, yada yada, "gripping memoir of his experiences as a fighter pilot".

Gripping is right. While there were plenty of interesting, often humorous, moments on the ground, the most fascinating of his experiences usually took place while Wellum was airborne and were described in a way that made me feel like I was there, inside the Spitfire, living vicariously through him. I loved the chatty, journalistic style of his memoir. From all appearances, Wellum must have kept a journal. At times, he mentioned not having the time to write for a few days or weeks.

This is the first RAF fighter pilot's memoir that I've read. At AmazonUK, I noticed that Wellum's commanding officer in 92 Squadron also wrote a memoir. Of course, I jogged over to see what that was all about and I discovered that Geoffrey Wellum's memoir follows the standard pattern of RAF fighter-pilot memoirs: training, becoming an officer, going into battle. Similarity could become monotonous if one read such memoirs repeatedly, but I have not and Wellum's was thoroughly enjoyable. And, naturally, his commanding officer's memoir was promptly added to my wish list. I would really love to read a completely different perspective by someone else who served within the same squadron.

My only complaint would be the frequent use of technical jargon and terminology or abbreviations without explanation. But, most of those could be reasoned out, with a little thought. A jaunt online would have also helped, but I didn't bother because I still had a crap connection.

A word of warning about the reviews: I've discovered, lately, that Amazon reviews frequently - not just occasionally but frequently - contain spoilers. Even in a memoir, I don't want to know the ending ahead of time and I recall that there was at least one review that gave away a bit too much. Thank goodness I didn't view it till after I closed the book.

I'm giving this one my top rating because I loved every minute of reading.

Coming up: A review of Stormbreaker by Anthony Horowitz

Currently languishing unread: Great Expectations by Charles Dickens; I think I'll have to start over and skim what I read earlier because I set it aside for far too long.

Still bouncing up and down repeatedly because of: DSL! I love it!!!

On the to-do list: Choosing a pile of unread nonfiction for the Non-Fiction Five challenge. There are plenty of non-fiction books lying about, so it's really just a matter of narrowing down and deciding which books I need a kick in the britches to sit down and read.

Nifty moments I'm reflecting upon: Chatting about Kazuo Ishiguro's books with the clerk in Off-Square Books; watching a coach physically (and loudly) tug a youngster toward the pool, insisting that he would have to wait to use the restroom until after his event because, "You're up now!"; the food, oh my gosh, the food in Oxford.

Bookfool, ready for a good soak
Posted by Bookfool at 8:15 PM