The Moon on a Stick by Valerie-Anne Baglietto 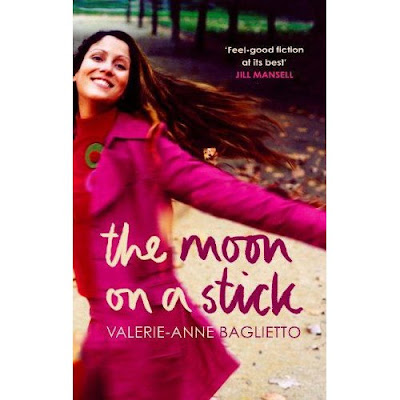 Being left this way was like being knocked off a known trajectory into an unknown one. But as Amy loaded a few bags and plastic storage crates into her car, recalling thankfully that the Espace, at least, was registered in her name, she realized that no path from cradle to grave could ever be truly prepared for. There was usually something just around the bend, on its way to hit you. As if you were a hedgehog and life was just one long road to cross.

Elspeth stared defiantly into the creamy liquid in her glass, where the ice was already starting to melt. In the depths of her mind, a memory stirred. Something about God not being everywhere at once, which was why he created mothers. Except she had always upheld that God was omnipotent, so this had never made sense. Strangely, however, she was now starting to see a grain of truth in it. Maybe loving, caring mothers were a good reflection of what God was really like.

Amy Croft thinks she's settled down for life. She and her partner, Nick, have three adorable boys under the age of four and have been together for 14 years. They still haven't gotten around to marrying, but Nick is slow to settle on a date and Amy has made plenty of excuses, if only to ease her own mind. She has the engagement ring, the partner and the kids, already. He works for his parents' company and she stays home. All seems in order.

But, then Nick's best friend Paul drops a bombshell. Nick has called from the airport to say he's married someone else and is leaving the country. With Paul as go-between, Amy is forced to leave their lovely apartment and move into her mother and teenage sister's small cottage. Suddenly, Amy realizes what she has been missing all along and must start all over to find the absent ingredients in her life.

This is my second read by Valerie-Anne Baglietto and I only vaguely remember the first enough to know I really enjoyed it. The pages flew; I liked Amy and most of the people in her life. The book probably fits better under the classification "women's fiction" (which I abhor) than "chick lit" or "romance", but it's partly a relationship story, primarily the tale of one woman's discovery that she can stand on her own two feet without a male to prop her up. The fact that Amy eventually finds love doesn't ruin the story; it just makes The Moon on a Stick more of a feel-good novel.

There were a few minor "reality check" moments that made this novel less than superb. The writing is fluid, so it was a quick read for 392 pages. But, now and then, some small incident would interrupt that comfy suspension of disbelief. One such occasion occurred when Amy was searching for a new home for her little family and two-year-old Mikey noted that, "There's no room for daddy to play on his 'puter when he comes back from holiday." Unless she has little baby geniuses--and there's no indication that Mikey is closer to three than two--I find it unlikely that he'd not only speak such a complete sentence but also manage to reason out that a room is small enough to be potentially unable to contain a specific item. Children are ego-centric and tend not to think of others, although some have a greater spacial understanding than others. Similar quotes by her three-year-old made me think that either the author was childless or forgetful.

Still, I enjoyed the book and tried to ignore the moments that my sense of reality was jarred. The Moon on a Stick was definitely a nice break from some heavier reads. I have no idea what the title relates to.

Also finished: In the Cut by Susannah Moore (I could find no image online). I picked up In the Cut and began to read it, yesterday, because I was in the mood for something short with atmosphere. The movie didn't 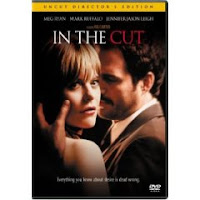 appeal to me at all; it appeared too violent and frightening. While I had totally misjudged the story based on the movie clips viewed, I was definitely correct about the tension level. In the Cut is the story of a woman who teaches English. She has lived in 14 countries, as the daughter of a diplomat, and is quietly self-confident. When she walks in on a couple and later finds out that the woman was brutally murdered, she keeps the information to herself and gets involved in a dangerous relationship with a cop who might be a murderer. At the same time, she begins to question herself and those around her, finding herself frightened of a student who follows her home to ask for advice and a friend who sometimes watches her from his window.

In the Cut is a book that makes you think and is intelligently written but just flat sordid. The entire novel is heavily, rudely se*ual and offensive. Worst of all was the sense that cops, in general, are bad people. My overwhelming feeling, as I read the book, was: "What a waste of talent and skill." Susannah Moore can write; but, In the Cut would have been a good one to lock up in the file cabinet and label a practice manuscript. It's nasty, sinister, and in the end, horrifying. Not my thing. I can't recommend it at all and am somewhat stunned that I finished the book.

Just started: Of the Farm by John Updike.

Wouldn't be caught dead in: 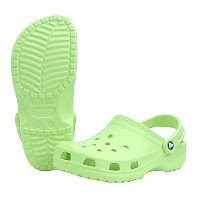 These shoes. They are popular amongst the swim-club parenting crowd and I've heard they're extremely comfortable (as well as waterproof). I'd rather wear flip-flops and get blisters between my toes.

Just getting ready to: Take the sweet little fur beast for a recheck. She was due last week, but I didn't want to take the chance that she might end up stuck in a cage all weekend.

Off to search for the cat carrier. Happy Tuesday!
Posted by Bookfool at 7:48 AM