My Favorite Type of Writing - a Meme - and other stuff 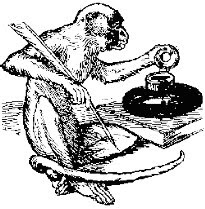 I still need to do the meme Chris tagged me for, but since Andi of Tripping Toward Lucidity and Heather of A High and Hidden Place both also tagged me for a very short meme on favorite writing types, I've decided to go for the writing meme first. It's easier on my little brain. You get to see all sorts of stupid links to my writing, in this one. Oh, goody.

Actually, that's a little harder than I thought. Sigh. I think my strong suit in writing is probably the most outwardly boring thing on the planet: writing book reviews and articles. I only really enjoy writing them if I have the freedom to write casually, in a style that I consider chatty and conversational, hence the decision to begin blogging, last year, which gave me the option to post a serious review on my somewhat staid listserv and then talk more freely about my feelings at length, elsewhere. Writing columns or articles is my most heavily published area, as I used to write articles on writing (which were published in various newsletters) and have been involved in writing for two ezines, now (shameless plug for Andi and Heather's cool new book ezine: see Estella's Revenge). My old ezine column was a slice-of-life humor column called "Signs of Life" and the columns are still archived. You can read my third column, which is among my personal favorites, here.

I think my favorite type of writing is anecdotal, but I get the most satisfaction out of completed creative writing, probably because it's something I really have to work hard to finish. I've "won" National Novel Writing Month, twice, but only actually wrote "The End" on one of those two books. And, I've had exactly one short story published. My friend, John, used to rib me about the fact that I had exactly five rejection letters and one published story. He thought that was a pretty good percentage, I guess. In five years, I still haven't altered those statistics. How sad is that? That's because I really haven't written much fiction, apart from those NaNo novels.

Gosh, I hope that didn't put you to sleep. I tag Canadian Chris of Book-a-Rama and Jessica of In Search of Dessert to continue this meme.

Almost done with: The Secret Lives of People in Love by Simon Van Booy

Didn't get around to: Posting a Thursday Thirteen. But, I thought about it and started a list; I wasn't actually sure if it was . . . . I don't know, relevant? I was just going to mention thirteen beautiful things from my walk in the park, yesterday. I think I'll just give you a quick list, right now. Here you go.

13 Beautiful Things I saw, heard and smelled in the Park, Yesterday (and a few small pics of some of them, which kiddo and I took, later - 'cause New Orleans Chris asked to see photos):

1. A fuzzy vanilla-colored caterpillar in a hurry (he was hauling - it was so cute).
2. Purple-flowered weeds that are knockout gorgeous.

3. A hawk lazily circling above me and then landing in the top of a tree.
4. Male and female cardinals - a couple - flying together.
5. A jogging mother pushing a dual stroller (one baby, one toddler) with a gorgeous dog on a leash, running at their side.
6. An angel tombstone in the Jewish cemetery (a really interesting old cemetery that borders the park near its exit - you can read about people who died in the yellow-fever epidemics during the 19th century on some of the tombstones).

7. My friend, Tom, leaning on a pickup truck to chat with someone. He never fails to turn to say, "Hey, Nance, how ya doin'?" or wave if he's farther away (or driving past - he works in the park).
8. Bluebirds nesting in a cannon.

9. Three yellow butterflies that swirled around my legs.
10. Mystery snow - really, I don't know what it was, maybe something like cottonwood seeds or insects swarming? Whatever I saw, it was from a distance, back-lit, and looked like falling snow. It was beautiful.
11. Honeysuckle! I love the smell, taste, and sight of honeysuckle!
12. This other plant, which has a powerful, cloying smell but is very attractive:

13. Our flag at half-mast. It's a sad sight, but also a nice symbol of solidarity during a time of grief for many.

I chopped those photos down thinking they'd be good to stick at the top of future Thursday Thirteens (you can click on any of them to see a larger image). Anyone who can teach me how to add lettering to a photo, would you, please please please? I could use some help. I've asked the spouse and he just says, "Photoshop. Need to learn Photoshop." Okay, yes. But, the only course I've seen advertised locally is a night course in Jackson and I can't do that because Mom Chauffeuring is the priority.

Just bought: Some camouflage clothing so I can try not to freak out the wildlife when I want to get a bit closer. Seriously. My husband thinks I've lost it. We'll see if the camo works. I'm pale and blonde, almost luminous in the spring when I have no hint of a tan. Shoot, I'd be frightened if I was a bird and saw a bright thing like a Bookfool heading in my direction.

Hope to get that review posted, tonight. Happy Friday, everybody!
Posted by Bookfool at 1:00 PM