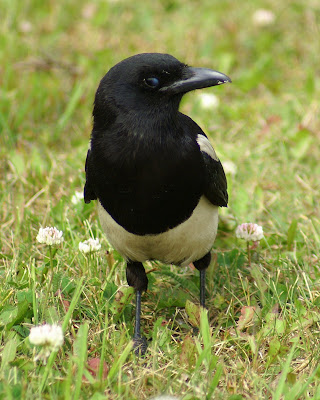 There's an awful lot to be grateful for, today. Really, that's true every day but some days it's just more apparent than others, isn't it? Here's my list of things I feel like saying "Wahoo!" about, today:

1. The internet, the great equalizer - I've been thinking about this a lot, lately. If not for the internet - blogs, listservs, email - I would have missed out on meeting some terrific, fascinating, thought-provoking, like-minded people merely because they're not in my age range or, you know, on my side of the world, etc. I'm so truly grateful for all the wonderful people I've met thanks to the internet. I don't mean the winged guy above left.

2. Bird song - The sun is out and I've been outside potting some more flowers. The sound of the birds singing was just magical. It was a joy to listen to them while I was spilling dirt all over the patio. I didn't say I was a tidy person. Okay, here's where the photo comes in. The bird photo at left was not taken here - I snapped him in Alaska, last year. I just thought he was cute and I wanted to throw in a bird photo.

3. Bathtubs and running water - Because I got really sweaty and filthy potting the plants. I did get some of the dirt into the planters. Just thought you'd like to know.

4. A reasonable teenager - This is not something to take lightly: I have an even-tempered, well-mannered teenage son, just a really nice kid. I cannot even begin to tell you how immensely grateful I am to be his mother. I've been thinking about how much I appreciate my youngster, today, because the youngest son's claim to rebellion is his hair. He has this huge mop of mildly wavy auburn hair and he likes to grow it out longish, sleep on it wet and then not comb it, so that he kind of looks like he's stuck his finger in a light socket. He thinks it's funny and on an ordinary day he can't be persuaded to do anything to settle the hair down. But, today he had a music festival to go to and I thought he needed to be a little more presentable. So, last night I told him I needed to cut his hair and he should do his best to comb it into tidiness, today. He said, "Okay." Do you know how cool that is? He made a funny comment with a little squeal about all that beautiful hair on the floor, after I trimmed him up, but this morning he got up and combed his hair. Yes! The band director even thanked him. I just love that kid. I was going to paste a photo of him, here, but I seem to be having a little trouble with Picasa. Well, at least you got to see a cute bird.

5. Electricity - Because I've been thinking about The Sex Lives of Cannibals (review below), I'm particularly happy that I can switch on a light (even if it blows out at 5:00 in the morning, while I'm stumbling across the floor to answer the phone), refrigerate and zap food (I'm not much of a cook), and . . . probably most important . . . turn on the air conditioner!!!

Recently walked in my door:
Don't Kiss Them Goodbye by Allison Dubois and
The Secret Lives of People in Love by Simon Van Booy (short stories; an advanced reader - I read the first story, this afternoon, and it was a sweet, smile-inducing story).

Two of the best things I've read this week:
Kookiejar's post on Thin Mints versus Grasshoppers
Bellezza's post on why Sometimes Empty is Good

Totally forgot to mention: My list of books read, this year, was getting too long so I've moved it from my sidebar to a separate blog. So, now there's a link instead of a list in my sidebar. Ignore the photos, if you go there. I took photos of some of the Firefly actors off the TV, yesterday, and wanted to see what they'd look like if posted small enough that you couldn't see the pixels as easily.