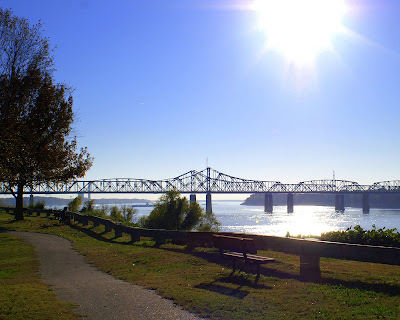 We're still adjusting to the hot weather, here, and I'm ready to turn around and head back to Michigan. Wow is it hot! Youngster and I climbed into the car, this afternoon, and the digital thermometer registered the outdoor temperature at 102 degrees. And, then, of course we drove long enough to air the thermometer down to 95, but still . . . wow, is it hot. When I was "interviewing" Simon (more like chatting with him), he asked if it gets into the hundreds very often, down here, and I said it's not so much the heat as the humidity. I feel like I told a fib. Yes, we do get into the hundreds, but it typically doesn't last for very long and it's definitely the humidity that'll get you. Not so at the moment. It's fiercely dry and painfully bright out. A great day for raptors, though: 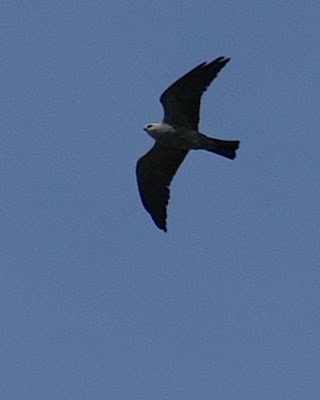 The fellow above is a Mississippi kite. Hubby keeps joking that he doesn't see the string. Oh, hahaha. I get it.

I didn't buy a single book in Ann Arbor, not one. That has never happened to me; Ann Arbor is a book-loving city, with new and used bookstores all over the place. I'm still trying to figure it out, wild-guessing that it has to do with the fact that there was very little time to read. The guys even made me turn the light out without reading time, at night. Actually, I came back better rested than normal, so maybe I need to shift my reading hours a bit.

However, there was a book from Paperback Swap waiting in the mail and youngster had to go to the library to fetch Season 5 of Buffy the Vampire Slayer, today (which meant that I had to mosey on over to the library sale corner). So, I've got some recent acquisitions worth photographing. Here they are: 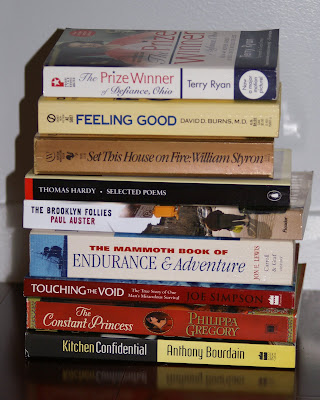 Back-tracking a little . . . I must tell you about our flights up to Michigan, which were very interesting. On the flight from Jackson to Cincinnati, we had a little turbulence toward the end - not a bad flight, overall. What really made it interesting was a fellow who apparently doesn't fly often. Perhaps it was his first flight; I can't say. But, when it began to get bumpy, he got a little nutty and, suddenly, every turn of the plane was reason to shout out either a mild expletive or "What the --?!" Occasionally, he even squealed like a little kid. Best of all was his reaction to that one big noise that comes right before landing. When he let out a whoop of horror, kiddo quietly said, "Landing gear." I was really proud of youngster for holding the eye-roll and keeping it quiet.

Our next stretch, from Cincinnati to Detroit, was even a little frightening to the well-traveled husband. Although, the average bear wouldn't know that . . . I'm merely tuned in to his every nuance. Yeah, yeah, I'm lying. Anyway, there was a storm outside and storms mean turbulence. A little turbulence is no big deal, but the plane was rocking left to right for almost the entire flight and it did become a little tiresome. The landing was just downright scary, with the spouse later commenting that, "Those one-wheel landings are a little unusual." Uh-huh. As we pulled onto the apron, I turned to husband and said, "Well, that was a heck of a flight." At least a half-dozen people around us nodded and muttered in agreement. The really, truly amazing thing about that flight, though . . . there were at least three small children around us and there was not a complaint or a wail from any of them. Very impressive, I thought. We all agreed we'd have hated to find out how the fellow from our first, rather uneventful, flight would have reacted to the bumpier second leg of our journey.

Coming up: A sticky post for the closing of the Chunkster Challenge. I've never taken the time to figure out that Mr. Linky thing that other challenge hosts use, so the final check-in will be much like the most recent contest posts. I'm currently gathering prizes together; as soon as I've finished rounding everything up, I'll wrap up that post and paste it to the top of the page.

And, after that, I'll work on a "100 Things About Me" post. It'll be kind of fun seeing if I can come up with 100 things that aren't completely inane.

A quote, for your edification:

Love reveals the beauty of seemingly trivial things - a pair of shoes, an empty wine glass, an open drawer, cracks on the avenue.

From "The World Laughs in Flowers" by Simon Van Booy

Oops, I forgot it's Wednesday!!! Ack! Okay, look for a belated Wahoo on Thursday. I have lots of things worth wahooing about.