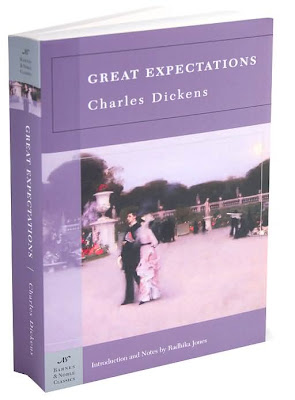 I didn't rush through Great Expectations, but the time spent reading was addictive and it went fairly fast. Too fast, in fact, to bother writing down any page numbers or mark quotes. I just didn't want to put the book down long enough to bother. So, the only quote I marked was this quote, which made me think of junior high:

So, throughout our life, our worst weaknesses and meannesses are usually committed for the sake of the people whom we most despise.

For those who haven't gotten around to reading, Great Expectations is the story of Pip, a young boy who lives with his temperamental sister and her simple but kind husband, Joe Gargery, the town blacksmith. Pip is visiting his parents' graves when an escaped convict frightens him into bringing food and a file to remove the ball and chain from his ankle. Not long after his experience with the convict, Pip is asked to visit Miss Havisham, a reclusive eccentric who still dons the wedding dress she was wearing the day her intended sent her a note and ran off with her money. Miss Havisham has an adopted daughter named Estella, whom she is raising to break the hearts of men who pursue her.

Pip is entranced by Estella's beauty but hurt by her condescension. Yet, he's so captivated that he can't get Estella out of his mind and determines that he must make a gentleman of himself in order to win Estella. He asks for help from the granddaughter of the schoolmistress, Biddy, who does her best to teach him everything she knows. But, a letter from a lawyer which says Pip is to come into "great expectations" (some form of inheritance) and must be fitted out as a gentleman and hasten to London is the first turning point for Pip.

The rest of the story tells of the ups and downs of Pip's life as he is educated by the brother of Miss Havisham, meets his lifelong friend Herbert, and begins to overextend himself financially while inadvisably separating himself from his roots back home.

Of course, there are a lot of twists and turns that I'm not mentioning. Pip's determination to eventually marry Estella, for example, which is thwarted at every turn by her inclination to exact revenge on any man who pursues her. Estella has been taught to deceive and entrap, but certainly never to satisfy. Pip, however, is convinced that Estella's hand is a part of his great expectations and that someday he will win her over.

It's easy enough to guess who Pip's benefactor is, but there are two possibilities and that lends the story a hint of mystery. As the story unfolds, more secrets are revealed and characters' lives explained. Dickens certainly knew how to keep one's attention with the gradual revelation of its various strands, the well-drawn individuality of each character, the humor, tension and mysteries, all of which add up to make the story thoroughly absorbing.

I can't believe I've missed out on Dickens for so long. Great Expectations is an amazing roller-coaster ride and has just made it onto my mental list of all-time favorite novels.

Also finished reading: Dedication by Emma McLaughlin and Nicola Kraus. I'll try to get a review of that posted, later tonight.

Haven't really felt like writing, this week - I can't say why. The husband called one last time from Darwin, yesterday, before leaving for the interior or desert or Outback, whatever. He will be, he said, in a part of Australia in which 8 of the world's deadliest snakes reside and claimed he's going to let his boss walk ahead of him. Hahaha. At least he's kept his sense of humor. Mine seems to have abandoned me.

We're having daily storms, here - sunny or partly cloudy in the morning, stormy in the afternoon. The humidity has thus shot back up to normal (the yuck zone) and the grass is growing way, way too fast. It's too late for quite a few of the flowers, but the strawberries that died out in the heat are making a comeback.

I opted to skip this week's Wahoo Wednesday post because, a) it was storming and, b) it was Wednesday when the husband said, "Talk to you in 5 days." Well, gosh, that just kind of got me down. So, I'll watch for Wahooey things and try to make next Wednesday's a nice, long post.

Off to take the sick kitty to the vet to be x-rayed and then take the kiddo to a movie. I leave you with the kind of car the spouse has decided he wants to own, since seeing them in Italy (taken at the Canton, Michigan IKEA - "You are in IKEA heaven," said Simon, when he called and I told him how uncrowded the store was. We were, indeed.): 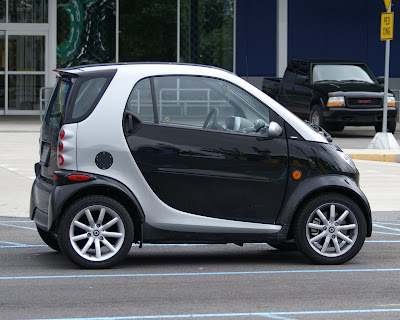