The God of Animals by Aryn Kyle 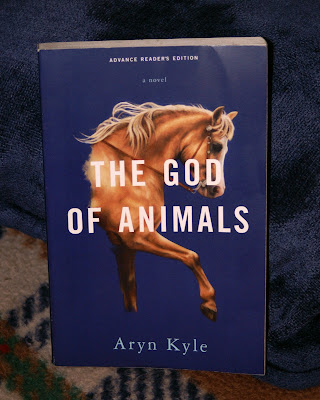 Sheila Altman had finally come back and we mucked stalls while the sounds of hammering echoed through the barn. "I'm thinking of giving it up," she said, and I stopped, the pole of my rake sweaty in my palms. The air around us vibrated with the noise of building, and for a moment, I thought about pretending I couldn't make her out over the din. But Sheila stared across at me through the white feathers of her eyelashes. I had heard every word and she knew it.

The quote above is almost random; I flipped through The God of Animals until I found a paragraph that I felt was fairly representative of Aryn Kyle's prose. Her writing is simple and straightforward, written from the viewpoint of 12-year-old Alice Winston, who lives on a run-down horse ranch with her overworked father and a mother who has been depressed since Alice's birth - so severely depressed, in fact, that she never leaves her room. Alice's sister, Nona, has run away with a cowboy, leaving Alice to bear the enormous responsibility of helping her father with cleaning and upkeep of both home and horse stalls, paying bills and caring for her mother. And, Alice's lab partner from school has been found dead, drowned in a canal.

Alice is understandably anguished over the tragic death of a child she knew, twisting her own mental image of her former lab partner to fit her emotional needs. In her mind, the dead child becomes the best friend Alice never had, while in reality she is unable to connect with the one person willing to offer her friendship, the wealthy client whom her father is training to ride Nona's old horse.

There's a lot more to the story of Alice than I can possibly describe without summarizing the entire story, so I'll focus on the characters and the overall feel of the story. In general, The God of Animals is depressing. It's about a young girl experiencing the harsh realities of life and reacting by grasping at love in a very odd place. At times Alice seems to be almost devoid of emotion - stony, quiet, stoic. At other times, she seems wise beyond her years. Her father, Joe, is a man who does the work he believes he's meant to do, but he has no head for business. He seems strong and courageous, but he's also incredibly frustrating. Nona is enigmatic and Alice's mother is baffling.

So, what kept the pages turning? Simply put: I wanted to know what was going to happen. Would Nona ever return? Would Alice's mother ever emerge from her depression or would someone find help for her? Were things ever going to improve on the ranch? The author's writing was not earth-shattering or beautiful in any way, and yet the book was a fluid read. I don't have any interest in horses, but I found that I enjoyed reading about the everyday workings of the ranch.

In the end, I had mixed feelings about the book. It's written well enough that I found the characters believable - so believable, in fact, that they angered or perplexed me. My biggest frustration was Joe's indifference toward his wife. It made no sense to me why anyone would let his wife languish in a depression so deep that she couldn't even summon the energy to leave her room. And, yet, The God of Animals is not Joe's story. The story is about Alice, about surviving tough times and reaching out, about a young girl's attempt to find escape in her own desperate way.

I think it's very telling that I knew, within the first 50 pages, that I would not ever reread the book. I knew I'd be able to read it and part with it easily, unless the author revealed some earth-shattering truth or ended on such an uplifting note that I would feel compelled to revisit the story in order to relive the experience. Kyle did not satisfy me in that way. The ending is neither horrifying nor uplifting, tolerable in that all the ends were tied up and yet disappointing for the same reason. It pulled me in both directions - loved it for ease of reading, hated it for heaping on so much sadness without revealing any great truth, wanted to kick the characters, found them somehow both dull and fascinating, admired them a little for toughing it out, thought they were stupid for the same reason.

Overall, I'm going to call it an average read. Had I not received The God of Animals as an advanced reader, I'm not certain I would have finished it.

Our weekend seems to have caught up with me, around mid-afternoon, so I'll leave you with a few bits of silliness. 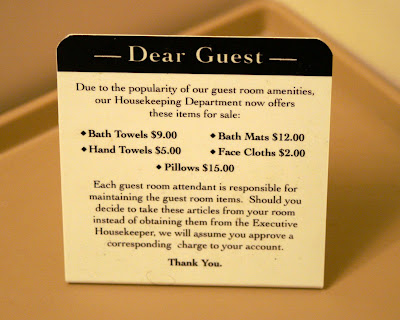 Translation: "We have a high theft rate in this skanky hotel; if you pilfer the towels we'll find out and you'll pay dearly for our crappy linens."

You should probably pay for the good life insurance policy if you have the kind of job that requires a lifeline: 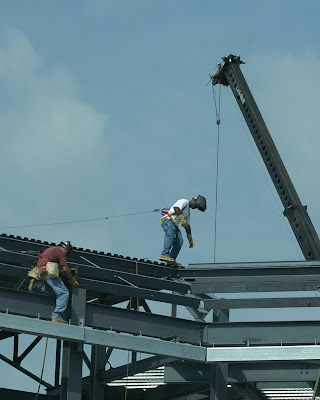 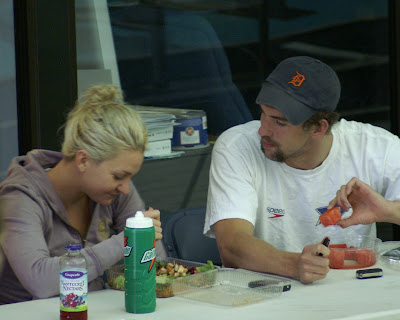 Photos of the two very hoopty authors I met, anecdotes about our journey, and whatever else hits me.

Fun of the day:

Running to Jackson to snatch up our luggage because the airline we were originally meant to fly on did not receive a request for our luggage and was threatening to hand it over to the other airline (the one that loses things). Followed by lunch at our favorite restaurant, a nap, and a whole lot of laundry. The food and the nap were really the only fun parts; but, I'm happy to have our luggage back.

I really missed finding the time to read, this week, so I'm off. Happy Sunday, everyone!
Posted by Bookfool at 6:14 PM

Email ThisBlogThis!Share to TwitterShare to FacebookShare to Pinterest
Labels: books, photos, recommended, reviews, you name it