Strike up the band 'cause Bookfool's back!!! Did you miss me? 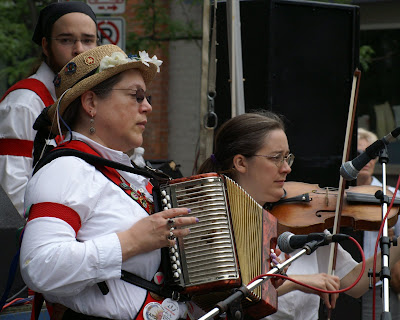 What a week!!! I'll be doing some major blog-hopping, tomorrow. I've had limited internet access, this week, and yada, yada on the no-time thing. Now that I'm back, I can tell you why I had such a busy week. I've been on vacation in Ann Arbor, Michigan!! Wahoo! I had such a blast. Kiddo attended swim camp at the University of Michigan and loved it. We spent plenty of time at the pool and were very impressed with the organization of the U of M swim camp (two of us were on vacation; the youngster was hard at work). Those calves in my most recent Wahoo Wednesday post belong to Olympic gold-medalist Michael Phelps (who is featured in the July issue of Men's Journal magazine). He and several other top Michigan swimmers dropped by for an autograph session on Tuesday.

Best of all . . . . I met two fabulous authors, this week!!! Our own bloggy wonder, Colleen Gleason, met me for lunch on Monday (waving to Colleen!). If you think she's wonderful on the internet, you really must go to one of her signings of Rises the Night and meet her in person. Colleen is loads of fun and a total sweetheart! Here's a link to her website.

And, on Thursday, I met Simon Van Booy for . . . well, it was supposed to be "brunch", but we got a late start and I guess it turned into a long lunch, instead (waving to Simon!). Simon is utterly captivating and he's also touring, right now, reading and signing The Secret Lives of People in Love. Anglophiles, take note: he has a lovely accent and he is a total charmer (that bit's for the females).

I'll be writing up interview articles of both for Estella's Revenge and will post links when the time comes. Photos forthcoming when the husband isn't nagging at me to please hurry up and finish so we can go to bed because we left for the Detroit airport on Friday morning and didn't arrive home till tonight (Saturday) at 7:00 pm. After numerous delays and a night in a skanky hotel (yeah, yeah, more on that, later), hubby managed to get us on a direct flight to Jackson. I loved the way the pilot, Dan, introduced our flight attendant: "The one, the only, the incomparable Sue!"

We had only one big bump, caused by "wave turbulence from another plane that flew in this area, quite some time ago." Have to watch for those disturbing air currents, you know. And, then we actually sat in the plane on the tarmac for nearly an hour, upon arrival in Jackson, because there weren't any gates available. Our pilot asked us to kindly open all the air vents - it was 97 degrees outside. No point in baking while we waited.

We ran so much that I was hardly able to read at all, this week, apart from The God of Animals (hope to post a review of that, tomorrow) and most of Simon's book, which I reread so it would be fresh in my mind when I spoke to him. I had a million questions; his stories are incredibly thought-provoking. I also managed to get about halfway into Kathy Little Bird, during the flight home.

Our other flights were really interesting - loads more stories to tell but I have to run!

Hope everyone's having a terrific weekend! I missed visiting your blogs and can't wait to catch up!
Posted by Bookfool at 9:42 PM