This will be an abbreviated Wahoo post. Since I haven't been outside much, for the past few days, I haven't taken a single photograph - not one!! Weird. So, here's a cute little wahoo from five days ago . . .

1. Wahoo for the gorgeous cardinal, a lovely bird that is always a joy to see. Not a great photo because this particular cardinal was so far away, but I love cardinals in flight: 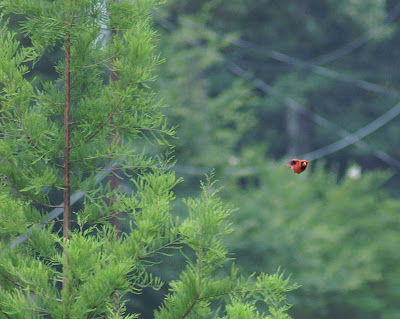 2. I got the neatest thing, today. Malady at Life By Candlelight regularly posts links to sites where you can sign up to get free samples of various products (I've been having loads of fun trying all sorts of new products). Today, the Fed Ex man dropped a tiny little package on my doorstep. I knew from the label that it was a lotion sample, but sent by Fed Ex? That was surprising. Youngster and I opened the box, which was filled with blue tissue paper. Inside the tissue was a pretty little glossy drawstring bag with two samples of Kinerase lotion. Wow! How cool is that? It was like getting a Christmas gift - okay, maybe a stocking-stuffer, but very nicely wrapped. Wahoo for fun things dropped on the doorstep.

Malady also recently had a drawing for an "Oprah tote" full of sample products, which I won. Here's a photo of the booty: 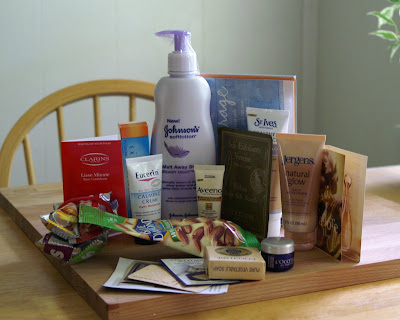 Can you believe all that stuff? Goodness. Only Oprah could possibly round up samples of that caliber (and quantity).

3. While in Ann Arbor, hubby and I dropped by the Ann Arbor Farmer's Market, where we happened across a booth with some polymer clay photo transfer pendants that I really liked. Ann, who makes the pendants, has a nice little website. And, she's a sweetheart. Wahoo for nice people who make pretty things. I don't have a photo of the pendants I bought, unfortunately, but she uses a variety of designs - some vintage images and some by a friend of hers. I'm particularly fond of the kitty images.

4. I took this photo for the kiddo, who is enamored of Mini Coopers and it's become one of my favorite Ann Arbor photos: 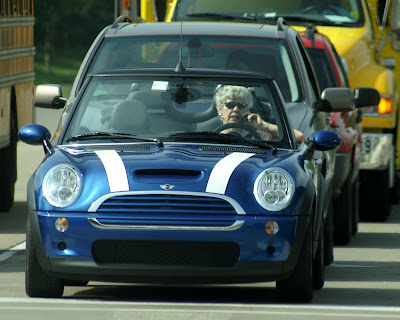 I love the primary colors of those vehicles lined up at the stoplight. And, doesn't it feel like you're kind of spying on that woman? Wahoo for colorful, silly, human moments.

Okay, gotta go - counting down to putting hubby on an airplane and sending him to the Australians. I've decided that the Aussies have to give him back in two weeks because he cooks. It's the best reason I can come up with. Okay, I'm kidding. I kinda like him, too.

Hope everyone has had a fabulous Wednesday!
Posted by Bookfool at 7:49 PM