Who's That in the Itsy Bitsy, Anyway? by Stevi Mittman 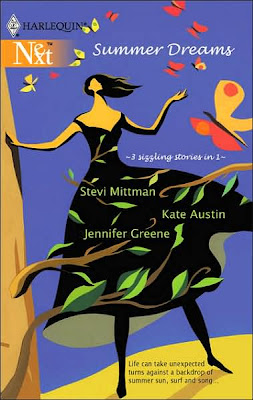 Just a quickie review, due to time constraints. I was sent "Who's That in the Itsy Bitsy, Anyway?" by Stevi Mittman. It's only one of the three stories to be released in the anthology Summer Dreams, which is scheduled for a July, 2007 release. Remember my comment about another book that had an interior decorator heroine? And, how sick I am of interior decorating stories because they bore me? Well, recurring heroine Teddi Bayer has a job redecorating the Long Island get-away home of a man by the name of Carmine De'Giuseppe. Carmine has scary family connections and may possibly be Teddi's real father. Stevi's version of Teddi-as-interior-decorator is anything but dull. In fact, it's a bit of a roller-coaster ride.

Teddi has not one, not two, but three good-looking men hanging around her: Mark, the contractor who helps her with renovations, ex-husband Rio, and detective Drew Scoones - who is willing to go way beyond the call of duty to watch out for her. That fact alone gives the story a bit of a Stephanie Plum feel. Add to that the fact that Mittman also has a terrific sense of humor all her own and you've got a great formula for entertainment.

When Teddi moves into the home to do renovations, she discovers evidence that someone has been camping out in the house . . . recently. In fact, things disappear, reappear and move around daily, usually while Teddi is sleeping. When her contractor discovers some potentially incriminating evidence inside a wall he's tearing down and it begins to look like Teddi's life is in danger, she gets help from her detective friend, Drew, and her ex-husband, Rio. And, then her mother shows up. Teddi's mother is a complete nutcase, so there's the usual fun banter with her crazy mom as well as a peek into what her mother must have been like as a young woman in love.

I truly adore Stevi's writing. While it's classified as romance, a lot happens in her books and the focus is never on just the males swirling around her. Instead, you get to see a woman who has a lot to deal with and often makes a fool of herself but who triumphs in the end. Teddi Bayer is a character I love. And, I think I mentioned this earlier in the week, but I'll repeat that I think one of Stevi Mittman's strengths is her consistency. Like the better-known Janet Evanovich, when you pick up a Mittman book or story, you know just what you're getting into.

Okay, must dash. This will probably be a light-posting week because the kiddo has a busy schedule.
Posted by Bookfool at 7:30 AM