Wait!!! I can't review The Pearl Diver till I mention that the latest issue of Estella's Revenge has been posted, ta-da! Wahoo! I love Estella and this one looks nice and juicy. I have one review in the June issue, here. Congrats again, Andi and Heather.

And, on to the book . . . I've been putting off reviewing this book because of fatigue and because I'm not sure I have all that much to say about it, so I'll keep it brief.

I bought The Pearl Diver remaindered and, as mentioned earlier in the week, from the cover blurb and trade paperback size of the book I assumed it was a literary novel with a touch of mystery - mostly because mysteries are typically sold as mass-market paperbacks. So, I was a little surprised to find that the book was a series book with an interior-decorator sleuth and not really very stylistically pleasing at all. The writing was, in fact, pretty flat and unemotional.

However, I enjoyed the mystery. The Pearl Diver is apparently the 7th of 8 Rei Shimura mysteries. Rei has been kicked out of Japan (for reasons that were never fully clear) and is settling in Washington, D.C. with her fiance when she's offered a job decorating a new restaurant. When her cousin disappears on the opening night of the restaurant, Rei goes into action to locate her and then is asked to search for another missing woman, the mother of the restaurant's hostess . . . and from there on things slowly unfold and tangle up and so forth.

It's been three or four days since I finished this book and I honestly can't remember some details that I think should have stuck in my mind. I'm not going to say Shimura did a bad job getting things across because I did think the mystery was a good one, it stood alone well, and it was not annoyingly complicated (which I like). Maybe I'm just a little off-kilter, here, and that's thrown my memory away from the details. I really did find it exceptionally unemotional; and, there's a secondary storyline that's so transparent I had to wonder why she even bothered. Overall, an average book with a rather dull sleuth and unimpressive writing, in my humble opinion. Also, this is the third book I've read, recently, with an interior decorator protagonist and I find details of decorating mega-boring reading material, so that undoubtedly effected my overall impression.

Just finished: What I Believe by Norma Fox Mazer and I see I've got a typo in my sidebar on that one. Oops. What I Believe is a review book for Estella, so watch for a link in July. It's a young adult novel - a quick read and excellent writing, but that's all I'm telling you.

I stalled halfway into Held at a Distance by Rebecca Haile but hope to finish that this weekend - it's another Estella review book and I should finish it pretty quickly once I pick it back up, so watch for that review in July, also.

And I'm almost finished with a short story by Stevi Mittman. It's an advanced reader that Stevi personally sent me; I don't have the other two stories that are in that particular book but I am loving it. I adore Stevi's writing; she has a great sense of humor (plus, she's really nice - you know I support nice authors) and is a consistent writer, which is very pleasing.

Recap of May reads:
Rises the Night by Colleen Gleason (advanced reader - grab it on June 5!)
A Spoonful of Humor by Henry L. Lefevre
Foreign Fruit by Jojo Moyes
Thirty Seconds Over Tokyo by Capt. Ted W. Lawson (Non-fiction Five)
Open and Shut by David Rosenfelt
We Are All Fine Here by Mary Guterson
Prescription for Adventure: Bush Pilot Doctor by Naomi Gaede-Penner (Non-fiction Five)
Pressed Pennies by Steven Manchester (Estella's Revenge review book)
The Year of Magical Thinking by Joan Didion (group read - not sure what happened to the rest of the group, huh)
The Pearl Diver by Sujata Massey
What I Believe by Norma Fox Mazer 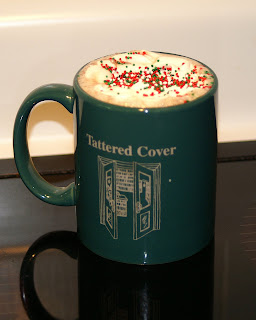 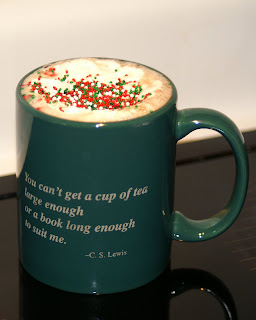 I'm particularly fond of those little sprinkles. The mug was purchased at Tattered Cover, a Denver bookstore which is sinfully wonderful - don't know how long ago, but too long. Need to see my nieces and nephews before they go off to college and get jobs. Time is passing way too quickly.

Note to TB Guy: I don't buy it, dude. Anyone who is sharp enough to become a lawyer knows darned well that he should not get on a plane while carrying a communicable illness, whether or not he knows it's not very treatable. Quit looking for sympathy and stop trying to shift blame. Shame on you!

Detail from a photo on my wall, for a change of pace: 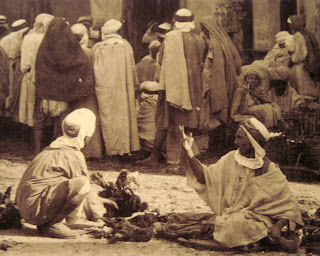 Cool, eh? I got the photograph for one pound at a little store in Bath, England.

Gotta go. Hubby wants the computer. Happy Weekend to all!
Posted by Bookfool at 6:45 PM