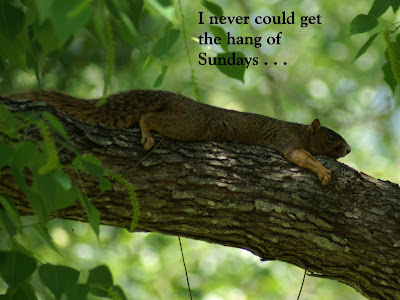 "It must be Sunday. You never could get the hang of Sundays."
--Bookfool's Husband

I have no idea what he meant. I'm perfectly fine on Sundays, really.

Still haven't finished any books, here, but I've been having fun reading. Anyone else having fun?

Husband and eldest son spent the day flooring the hallway, today, so youngest and I drove to the Big City. Yesterday, I refused to go to the Big City because it's Memorial Day weekend and I figured the traffic would be horrendous. Spouse was not happy, but I stuck to my guns, put my foot down, etc. My thought was that today would be a better traffic day because it's a Southern tradition that everyone goes out on the water with a case or ten of beer and about 20 cousins or friends and they all get fried on the Sunday of Memorial Day weekend. Mark my words, there will be a lot of dermatologists benefiting from this weekend in 30 years, when the nasty sunburns turn into skin cancer.

Okay, so any bets on who was right about the traffic? I am smiling. That's your answer. The traffic was so light it was actually pleasant. I only saw one - exactly one - insane, speeding, likely-to-die, flashing-headlights-to-say-"out of my way" driver, today. And, he was truly an idiot; he came close to tragic, high-speed death twice within the time he was visible to me. He also did not get off at the hospital exit, so we know those flashing headlights related to impatience, as opposed to medical emergency.

Anyway, kiddo and I went to Borders, where we discovered that the marked-down bargain books were down to $1 each. Wowee, did I have trouble narrowing down. But, I got myself down to just a tiny little pile of 5 books and kiddo got the last of the Alex Rider series, Ark Angel, from the other discount shelves. Fun.

By then, of course, we were starving. All that book shopping makes a bibliophile ravenous. So, we drove to the north side of town and ate Italian food. The husband called while we were awaiting our orders and said, "You little snot," when I told him I was eating at the good place. At least I didn't abandon him and go to Italy to eat Italian food and take cooking lessons at a freaking villa. Who is the snot, here?

Since I knew I was going to the bookstore, I didn't tuck a book inside my purse. Big mistake, but thank goodness I bought a few. I grabbed Kathy Little Bird by Benedict and Nancy Freedman from the Borders bag and began reading it in the restaurant. I am loving this book and I have a bad feeling I'll have to look up the other two "Mrs. Mike" novels. I used a little restaurant sugar bag as my bookmark because I couldn't find anything else. Which makes me think . . .

What's the weirdest thing you've ever used as a bookmark? I use anything nearby, provided it's dry (tissues and receipts have always been biggies); but, a friend once used a lettuce leaf to mark her place. I still think that is by far the weirdest thing I've ever heard about when it comes to substitute bookmarks.

In other news, I'm having a serious migraine-sufferer's crisis, here. I had a medication-only appointment with my primary physician, since my neurologist cruelly moved to the Gulf Coast and left me high and dry. Guess what? When I made the appointment, the person I spoke to by phone said, "I have an opening on Friday, May 21." I wrote that down on a little post-it pad instead of the calendar and filed away the thought that I had an appointment three weeks from Friday. And, wouldn't you know, the 21st was a Monday. On Wednesday, I realized we'd had a miscommunication and it was too late. I was an unintentional no-show. So, I asked for a refill of the one med I thought I could get by phone. I had to spell the seven-letter drug name four times and, yep, they got it wrong. So, I am currently completely out of medicine that works, my doctor is about to leave town and thinks I'm a no-show (so, like, no way is he going to squeeze me in, now), I have no alternate physician and I've got a migraine that's getting worse each day. Yeesh. It could be a painful couple of weeks, while I wait for the doctor to return from his vacation.

Hugify this and print it out for yourself, if you'd like. I feel like sharing. You'll actually probably have to save it and then resize. It won't hurt, I promise.

Don't tell anyone in Mississippi that I absolutely abhor sweet tea. They're not going to remember to bring it without the sugar, anyway.

Off to read. Happy Sunday!

Bookfool
Posted by Bookfool at 7:19 PM