Life is not fair and a book update 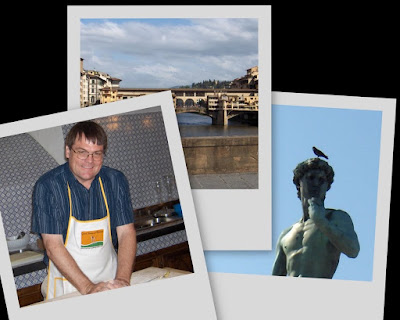 These are some of hubby's photos from Florence, in a collage I made while he fell onto the pillows after exhausting himself by spreading dirty clothing as far as conceivably possible. How do they do that? Left to right, handsome husband making one of three types pasta his class cooked up at cooking school, the Ponte Vecchio and one of many David statues with a bird on his head and his more sensitive parts cropped out. The spouse had a lousy camera he checked out from his workplace and he complained vigorously; but, I thought he still managed to get some nice shots. Obviously, Florence was not a miserable experience for him.

But, hey, I got photos of a heron, some bamboo and magnolias. So, I had some fun, too. Not quite the same but life is funny that way.

Did someone ask me how I made the previous collage photo? I recall being asked somewhere, but now I can't figure out who asked me and where the question was posed. Just for the record, I used Picasa's collage feature and since I just figured it out this week, I'll be happy to share how to assemble a collage if there's someone who wants to know. I'm really tired, so you'll just have to forgive me for being a bubblehead.

Since hubby is going to have a very, very busy travel schedule, this summer, it occurred to me that I'd better quit being a hermit and reconnect with some old friends. On that note, I drove to Jackson, aka The Big City, to attend my old writers' group's monthly meeting, today. It was great to see old friends. Sadly, one of the ladies was at the vet with her favorite kitty, who is dying of kidney failure due to contaminated pet food. Please send positive thoughts and prayers to Penny.

Because the husband arrived home rather late and the youngster attended a dance that lasted till midnight - the former making an explosive mess and the latter arriving home so hyped up that it took two hours to settle down - we had a late night and I made the jaunt to The Big City alone. There is much to be said for a few hours of controlling your own destiny, including the ability to decide where to eat lunch. How pleasant. I forget what it's like to make your own decisions without anyone else's opinion involved, since I'm usually tied to someone else's schedule.

Poppet and I stopped by the spillway in order to attempt to spot herons. I plunked her in the sand and on rocks to pose. Poppets are much more accommodating about being posed than, say, family members, I've discovered. We had a merry little chase in order to try to pose her near a butterfly and it turns out butterflies are about as cooperative as family members. But, I had fun just following a butterfly through the clover. I'm not certain whether Poppet found it enjoyable; more than likely, she would have liked to hitch a ride. Hopefully, photos will be posted to Poppet's blog within the next few days.

May your weekend be restful and full of good reading,

Bookfool
Posted by Bookfool at 7:49 PM