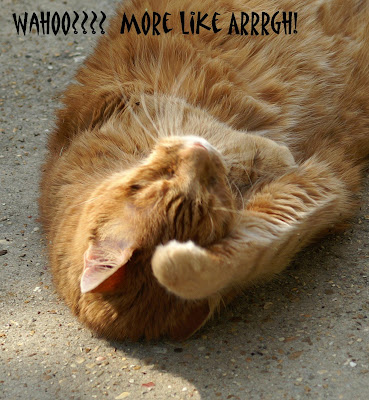 This was another difficult Wednesday, but there were a few funny moments so we'll just focus on the smiles.

We'll call this "Wahoo for Stupid People Because They Make Great Subjects For Anecdotes Week".

Stupid People Stories for your amazement and edification:

1. While stopped at a railroad crossing without any railroad-crossing gates, I was surprised to see a truck driving down the tracks and another about 50 yards behind. I'm guessing they're specially-adapted trucks designed for inspection or maintenance, but it's really bizarre to see a pick-up truck driving on railroad tracks. Anyway, Stupid Person #1 sat at the wheel of the only other nearby vehicle - which was headed the opposite direction to ours. SP#1 zoomed across the tracks at top speed. The driver didn't even pause to look left and right for oncoming trains. I thought it would have been interesting (as in Darwin Awards interesting) if SP#1 had been hit by a train-track truck instead of a train while crossing the tracks. Fortunately for him, stupid people tend to drive very, very fast.

2. The local firefighters have taken over the deep end of the city pool, this week, for dive training. By "dive training", I mean they're working on recertification for search and rescue (and recovery) work in the water, complete with masks, oxygen tanks and flippers. A nearby parent was baffled. "What do they need to know how to dive for in this area?" he asked. It's a good thing I wasn't eating or drinking because I would have snorted something in his general direction. We have bodies of water all over the place, here. There's the Mississippi River, of course, where people are frequently fished out of the water after falling out of boats. We have lakes, creeks, ponds - you name it. Stupid Person #2 made me smile, so wahoo for that. And, wahoo for the brave firefighters who are willing to go through this training in order to help out the stupid people who fall out of boats, off bridges and docks, etc. 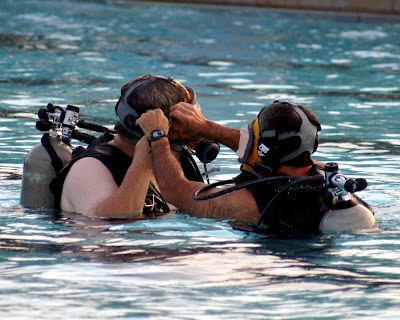 3. A continuation of Stupid Person #2's story. After wondering aloud why anyone would need dive training, he told the story of how granny fell in the water on The River and the family went rushing down south to find her, thinking she'd go downstream. Instead, he said, someone called the authorities from a business upriver to say they found granny. "She broke every bone in her body," said SP#2, but they fished her out. We haven't ever figured out how she managed to go upstream."

We had an almost awful moment on the way home from swim practice when the road turned oddly foggy and a revolting smell wafted in through the open car windows. "Shut the windows!" the kiddo shouted, so we quickly rolled them up. Just before we caught that whiff of nastiness, I was thinking, "It's too early and the wrong weather for fog." Sure enough, it turned out we were following one of the trucks that spray insecticide to control the local mosquito population. When we realized we'd just inhaled poison, the youngster said, "Couldn't they do something to warn people?" I said, "Like what?" and he suggested flashing lights and a sign or two saying, "Don't inhale." Hahaha. I love it.

Here's a pretty the husband brought home from Italy: 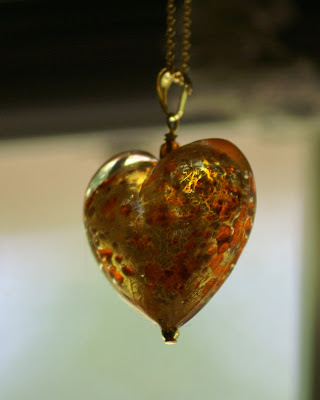 It's about an inch long and big jewelry does not look good on me. Also, that's a gold finish, not actual gold, and I have the kind of chemistry that strips finishes right off cheap chains. I tried the necklace on, bless him, but it looked just awful hanging around my neck, so my glass pretty is now hanging in the breakfast nook window. I love the way the light dances through the glass; it's really quite perfect. And, I can't call my husband stupid for not realizing it's too big because . . .

I married him, after all, and that wouldn't make me look particularly intelligent, would it?

The kitty pictured above, our beloved Sunshine, is much sicker than we imagined. Our vet x-rayed her and found a 2-3 centimeter lesion in her chest cavity. "That would explain why she's crying when you pick her up," he said. I'll say. She's getting a couple of good doses of antibiotic and anti-inflammatory medicine, tonight and in the morning, and then we'll fetch her and ply her with more. The vet said she could be shipped off for further tests to determine whether the lesion is a cyst, infection or tumor but that wouldn't alter the treatment protocol, so we're just going to bring her home and have her x-rayed in a month to see if she's improved. Prayers and positive thoughts would be appreciated. Sunshine is 12 years old, so the vet said he's "leaning toward tumor, but you never know." I feel like a bad Kitty Mom for not taking her in sooner.

To end on an upbeat note . . . one more quick anecdote. You know how there are people who have one of those faces that just look familiar to everyone? Well, apparently I'm one of them. In the past couple of weeks three people have mistaken me for someone else. I'd really like to meet my doppelganger . . . maybe. I'm pretty sure her name is Amanda, because I passed a woman in the Wal-mart parking lot and she said, "Hey, Amanda. How you doing?" Since we were walking in opposite directions, I just waved at her and said, "Hi, I'm great. How are you?" I figured there was no point to telling her I wasn't Amanda. Why ruin someone's day? So, I just played Amanda. Amanda's very friendly, of course.

I haven't added a photo to my sidebar, but I've been focusing on The Year of Magical Thinking by Joan Didion and should finish, tonight. It's been reviewed all over the place, so I'll probably just share a few thoughts and a quote or two, tomorrow. We shall see. This hasn't been a very bookish book blog, lately, so I'll try to focus on books for the rest of the week.

Wishing you all a lovely and very happy Wednesday.