Foreign Fruit by Jojo Moyes and other jazz 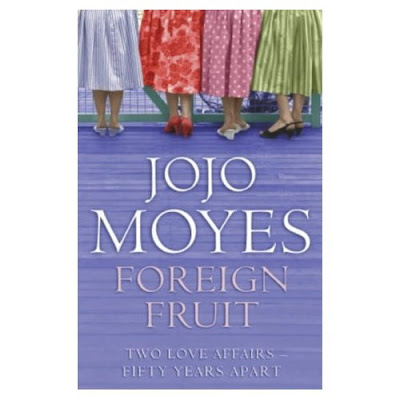 'Henry, you're being deliberately obtuse. I'm sure Guy's family are perfectly fine. I just think . . . his upbringing sounds . . . a little unusual, that's all.'

'Susan, he's a fine young man. He has no tics, no obvious deformities, his father is extremely wealthy, and he wants to take our troublesome young flibbertigibbet off our hands. As far as I'm concerned he could have been brought up playing the bongo drums and eating human heads.'

Mrs. Holden hadn't known whether to laugh or be appalled. It was so hard to gauge Henry's sense of humour sometimes.

On the Wednesday, however, Ellie's run of unusually amenable behaviour came to an abrupt end. She woke at a quarter to five and refused to be put back to sleep so that by nine Daisy was cross-eyed with exhaustion, and at a loss as to how to keep her fractious infant happy. It rained, dark, load-bearing clouds scudded across the sky, leaving them confined to the house, the shrubs outside bowing under the weight of the wind. Below them, the sea churned, murky grey and restless, a forbidding vista designed to quell any romantic illusions about the British coastline.

*Warning: I'm going to gush about this book. I just am. You have been warned.*

Foreign Fruit is a tale of two loves, fifty years apart. Set mostly in a coastal English town called Merham (with small bits in London), the story begins in the 1950s. Merham is a small village where everyone knows everyone else's business and all are expected to know their place. Lottie Swift is a former evacuee who has grown up with the Holden family, returning to live with them after her mother showed little interest in keeping her when WWII ended. She and Celia Holden are best friends - Lottie a subdued young lady who helps out around the house and watches the younger children, Celia a wilder, more carefree girl.

On the edge of a cliff in Merham sits a sprawling Art Deco house called Arcadia, which has been uninhabited for many years. When a group of bohemians move in, the local citizens are suspicious of their behavior. But, Lottie and Celia are drawn to the house and its mysterious blend of inhabitants. Their arrival in Merham stirs up the sleepy town and leads to a series of events that will not be forgotten.

Fast-forward to present day London, where Daisy Parsons is left to fend for herself when her boyfriend, Daniel, decides he can't cope with the unexpected stress of parenting and disappears. Worn out and fast depleting her funds, Daisy is forced to make some major changes in her life and heads to Merham to take on the task of decorating Arcadia, which has been sold to a club owner and is in need of major renovation. As Daisy adjusts to her new life as a single parent, her path crosses that of a feisty elderly Merham resident and their lives become intertwined in unexpected ways.

The cover blurb on this book is extremely vague and as I read Foreign Fruit it became apparent why there was little detail. There's a deliberate intermingling of the two stories set 50 years apart; and, to say much at all would potentially give away some of the surprises. So, let me say this . . . I usually dislike saga-oriented books. I loved this book. Often, the characters tire me when a book is long and detailed. I thought every detail was necessary or fitting and didn't want to say "goodbye" to the characters in Foreign Fruit. As I closed the book, I thought, "This is the first time I think I've ever been able to look at a cover and rattle off the names of the people pictured. Lottie, Celia, Adeline, Frances, Daisy and Camille." Six women shown only as skirts and shoes - and every one made such an impression on me that they're still with me several days after I closed the book. And, yet, everything was beautifully and perfectly wrapped up so that I didn't feel like the story needed to go on any further.

The writing itself is not what I would call brilliant, but stunning craftsmanship is worthless without a great story and the story totally swept me away. See, I told you I was going to gush. I don't even remember if there was any graphic se*. Weird! If there was, even that must not have gone on beyond what I considered necessary. There was one portion that jarred me. When the first section ends and the reader is thrown 50 years into the future, it's somewhat abrupt. There was suddenly a whole new set of characters to adjust to; it took me a while before I began to untangle things and enjoy myself as the author spilled the past into the present. When she did, I smiled and sometimes caught my breath . . . twice, my eyes filled with tears. The story flowed quickly and certainly did not feel like a long read.

My only other complaint - and that for which I must deduct half a point - is that the author used one event as an obvious device and then dropped it: in this case, a severe arm injury that was described as extraordinarily painful (requiring stitches and painkillers). And yet, somehow, the character, Daisy, was immediately able to haul her baby around with her arm in a sling without any complaint or explanation as to how she coped. Very irritating and the only time I felt that I, as a reader, was yanked from the flow.

Just finished: Thirty Seconds Over Tokyo by Capt. Ted W. Lawson (WWII memoir) and it was gripping. I'll try to get to that review, tomorrow, but . . .

I've got so much to do. Ever feel totally overwhelmed by all the things to be done around your home, all the tasks people expect you to do and trying to balance the necessary, boring adult crap with the creative endeavors that are tugging at you? Well, honestly, I ditched a lot of that necessary stuff, today. I can't get out of picking up my child from school and hauling him to his two swim practices but I can delay moving the laundry to the dryer and vacuuming the floor. And, honestly, I just had to because . . .

Brown apparently makes excellent camouflage. While I was outdoors - specifically, hauling the trash cans in from the curb because it was garbage day - I discovered that the wildlife was ignoring me. I've been trying to make myself invisible for weeks and, suddenly, a lizard was displaying in front of me, a brown thrasher (which I've recently learned to identify - my guide says they're related to mockingbirds but more "retiring and secretive") was chirping loudly in the brush beside our driveway and neither was disturbed by my presence in the slightest. I'm guessing it's because I was wearing neck-to-ankles brown. I ran to get the camera and snapped away. The lighting was perfect. It should have been Wahoo Tuesday. Still, I worked hard to get this photo: 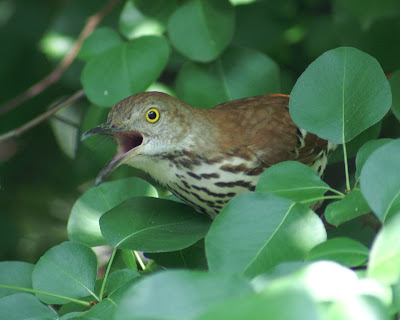 Loading that photo onto the computer was like opening a Christmas present. The brown thrasher chirp is almost a bark and this fellow's little beak moved so lightning-fast that it took quite a number of frames before I managed to capture him with his mouth open. Isn't he beautiful?

I think I'll take a photo of my latest acquisitions, tomorrow, rather than list them. I've gotten a pretty little pile of used books from Paperback Swap, this week, and I splurged on an insect-identification guide, today.

I've officially reached my Chunkster Challenge goal to read 4 books in 6 months. At least, I think that's what my goal was. But, I'm going to continue. The most important book on that list is still Great Expectations. I'm determined to read a Dickens before the end of June.

I suppose I should move that load of wet laundry, now. Hope everyone else had a terrific Tuesday!
Posted by Bookfool at 11:38 AM