Not much news from the Boonies, today

We're going to have to skedaddle to get ready for kiddo's Spring Band Concert, shortly, so just a quick post to share a few little tidbits. In honor of the band event, the teenager has just combed his hair! I just love it when he does that.

I'm still reading slowly, but hope to finish up Rises the Night (#2 in the Gardella Vampire series) and A Spoonful of Humor (tongue-in-cheek essays by an octogenarian - very fun), in the next couple of days. Reviews will follow as soon as possible, after I finish, and I'll be giving away a copy of Rises the Night later on, to coincide with the release. More on books when I finish one. Foreign Fruit, my other current read, is a chunkster! Yippee!

The laundry mountain was out of hand after My Weekend as a Total Slug (sounds like a great story title, doesn't it?), so I was in desperate need of preoccupation. Meaning, I needed to watch a video or I never would have managed to sit still long enough to fold everything. Since I enjoyed Firefly so much that I rank it the #1 Best Series that Was Canceled Without a Decent Chance, I think it's worth watching repeatedly. So, back to watching Firefly from the beginning. Naturally, this meant I had to also stop periodically to take photos off the TV screen. Guess what happens when you forget to change your shutter setting and overexpose a photo off the television? This bit of utter coolness is the result: 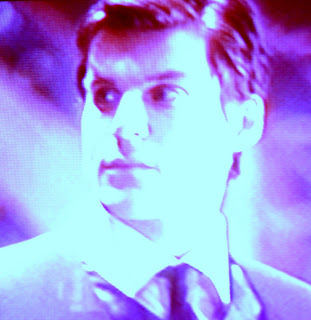 Funky, eh? Kind of looks like an Andy Warhol painting.

Off to get ready for the concert! Happy reading!
Posted by Bookfool at 5:07 PM