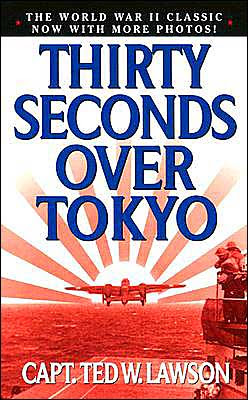 Thirty Seconds Over Tokyo is the memoir of a U.S. Army pilot who took part in the "Doolittle Raid," a secret mission to attack the heart of Japan and boost the morale of U.S. residents after the devastating attack on Pearl Harbor and a string of Allied defeats in the Pacific. There's an excellent article about the mission at Wikipedia, which I highly recommend, as well as a brief article about the author, Capt. Ted Lawson. In general, the mission involved the bombing of key military targets in five different Japanese cities and the army planes, heavily modified, were launched from the aircraft carrier USS Hornet. Captain Lawson was among those who bombed known targets in Tokyo and describes the months of planning, training, memorizing of maps and photos, work on the planes and time spent on the aircraft carrier.

The mission itself was quite brief, as the title indicates, and a success from a strictly military standpoint. But, the escape of each plane to China was a difficult one, and the plan to launch within a specific distance of Japan was thwarted when the Hornet was spotted nearly 200 miles before the carrier had reached the pilots' intended launch site.

Lawson describes the entire story of the mission, beginning with how and why he ended up flying an army bomber (the Ruptured Duck) and volunteering for a dangerous mission so secret that even the pilots didn't know where they were headed until they reached the aircraft carrier. The story is gripping and harrowing. I flipped through it in the store and read a bit of a spoiler about Lawson's injuries, but if you look at any website with his name in it you'll find the information is readily available and it doesn't spoil the reading in any way.

I think I may have heard reference to the raid, but it's not a story I had any working knowledge about. Lawson's writing is what I would call direct - not written with the flair of Audie Murphy's To Hell and Back, which I reviewed here, certainly more simplistic, but with plenty of impact. I enjoyed it and, as always, found it amazing reading about the horrors experienced during a time of war. I did think that Lawson's story was told with a whiny tone, by comparison with Murphy's, but it's still well worth reading and a very good, definitely gripping account.