We Are All Fine Here by Mary Guterson 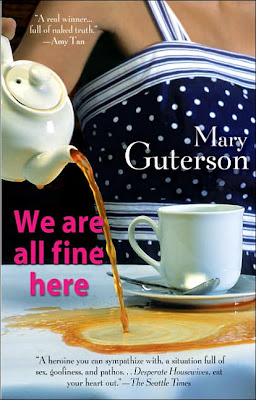 I spy around for Ray and locate him in the kitchen, chatting up some woman I've never seen before. The woman is laughing hard enough to give everyone within fifty yards a tour down her pink, waxy throat. Ray catches me glancing at him and does a quick double raise of his eyebrows, as thought I should understand what that means. That was always the problem with our secret language. Neither one of us ever knew what the other was talking about.

Mothering is everything it's cracked up to be, which is to say, a complete and total nightmare. Anyone who tells you differently is not to be trusted.

Under no circumstances should the new father show up at the hospital looking tired and stressed and wanting comfort from the new mother. Under no circumstances should the new father expect to still be able to attend a Sonics basketball game with his buddies the very next evening because, as he tells the new mother, he might not be able to get out with his buddies for a while.

I know a woman whose husband died and left her alone to raise their three-year-old son in their tastefully furnished home, along with two cars, a condo at Sun Valley, and an insurance policy to keep her in fat city for the rest of her life. Isn't that really every woman's fantasy? That her husband would die and leave her everything and she wouldn't have to go through a messy divorce and also wouldn't have to live with him forever and put up with doing his laundry and dealing with his parents, and cooking things with no dairy products for every meal because he's goddamn lactose-intolerant?

It's been a couple of days since I read We Are All Fine Here and I blew through it in one night, so I had to go back and refamiliarize my self with the book, having spent so little time with it. We Are All Fine Here tells the story of Julia, who has never quite gotten over the love of her life, Ray. Julia's been married to Jim for fifteen years. They married hastily when she became pregnant and now their offspring is a teenage boy who causes her plenty of grief. There's no spark between Julia and Jim, anymore, and she's really weary of his excited chatter about a beautiful woman he works with and runs with during his lunch hour.

When Ray nudges her into attending the wedding friends from college, Julia tells her husband she's going shopping. She doesn't anticipate feeling every bit the same as she did many years ago, nor does she plan to have a fling in the bathroom of the newlyweds. When she realizes she's pregnant and doesn't know whether the father of her child is Ray or Jim, Julia has some soul-searching to do.

We Are All Fine Here is a quick read and I enjoyed it, but there's one thing you should know. The reviews at Amazon and elsewhere tend to paint the novel in a lighter shade, often describing it as "funny". It's not really a laugh-out-loud funny book at all; realistically, I have to say it's a little on the sad side and raw in the way of an Elizabeth Berg novel. The difference is in the twist of phrase; Guterson's sentences are often smile-inducing, even when they have to do with her frustrations. Julia is kind of goofy and fun. She's just a little confused about how and why she ended up in a plodding relationship with a man who doesn't thrill her, with a job that amounts to hiding herself away and a teenager who has reached the point that never is about the average length of time he'd like to spend with his mother. I like the way Amy Tan described the novel, in her cover quote, "full of naked truth."

The storyline is fairly common, very much what I would consider a "woman's dilemma" with a lot of soul-searching and questioning, justification and sometimes outright refusal to admit the obvious. In other words, the character felt real to me. In some ways, I could relate to her completely. My husband is such a workaholic, for example, that he repeatedly told me I needed to have that second baby on Saturday, so he wouldn't miss a day of work. I did so (although, actually, the baby made the final decision when to arrive and he just happened to be good at scheduling), and then 10 days after the birth of my second child, my husband left on business. I still have trouble understanding why my husband puts work ahead of family; and, there were passages that had me tearing up a little because I felt like the author understood in a way either nobody else I've met does or, at least, is willing to share. But, I was smiling at the same time.

Since I couldn't put the book down till I finished, I'm giving it a high rating. The writing is not earth-shattering or beautiful, but it's realistic with a light touch. I loved that. It reminded me of an Elizabeth Berg book in many ways - the rawness and honesty, open sexuality and reflection upon where life has taken her because she's a woman. I'm not sure I'm describing it adequately, so I'm going to plunk a link to Amazon, here:

Coming up: Wahoo! Wednesday. It is Wednesday, right?

I've been tagged for a meme by Gentle Reader and I'll get to that as soon as I can. This might be a high-post day. We'll see.

Did I tell you the husband called from Italy, yesterday? He couldn't get his international calling card to work, so he had his assistant patch him through. It took three attempts before she managed to connect us and then I got to hear all about what a terrific time he's having, how beautiful Florence is and why we need to build a courtyard in our backyard, now that he's stayed at a quaint little hotel with a beautiful courtyard. I told him he'd need to get someone to remove the gigantic poison ivy vines if he wants to create a nice little corner, as he described. He said, I kid you not, "No, no, on the other side of the yard."
Posted by Bookfool at 8:45 AM