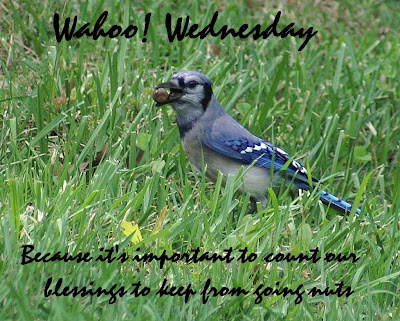 Oh, boy! Is it Wednesday again, already? Wow, where does the time go?

Okay, so this was a wonky day for me but I've been thinking about things worth saying "Wahoo!" about all day because, as it says above, we must count our blessings to keep from going nuts. Especially when we have spouses prancing around ancient countries, calling and sending emails about what a delightful blankety-blank time they're having while (without saying so) they're well aware that the wife is home washing dishes, ferrying the kid, and lugging in heavy bags full of groceries on her own. Don't you love the little touch with the nut in the bluejay's mouth? I admit that made me smile. As did the following:

1. Initially perplexing to me for their blatant stupidity, I had to smile about the three teenagers standing beneath a tree during yesterday's storm while lightning flashed around them . . . because at least I knew there was one person freshly trained in CPR, nearby (my son, who was safe and dry inside the band hall). There is never a shortage of stupid people to make you roll your eyes and grin. 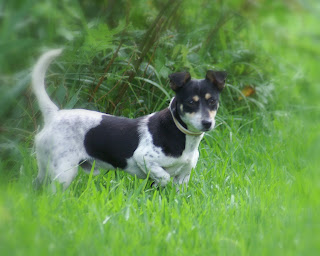 2. This friendly little visitor made me laugh. I stepped outside with my camera, this morning, before driving my son to school and this little guy bounded around the corner of my house. He was so cute; I wish you could have seen how he halted in surprise when he saw me and then rushed over to jump on my legs. He was a very friendly, happy and hyper little guy; I had a bit of trouble focusing on him because he moved so darn fast. And, then, he wanted to follow me into the house - boy, that was a riot. I kept picking him up and moving him to the far side of the patio and whoosh, back he came like a little doggy bullet. Adorable. 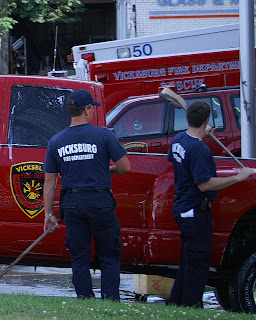 3. Firefighters in tight pants. Boy, I don't know about the rest of you guys, but a sight like that always makes my day.

4. Pillows. I'm very grateful for pillows. I love the line in the movie 13 Going On 30 when Jennifer Garner (playing the role of Jenna, who has just found her 13-year-old mind in her 30-year-old body and future life) says, "I need fresh air and a glass of water and a fluffy pillow!" I can relate. I've felt that way too many times to count. And, I'm very grateful that I've often had fluffy pillows within reach when I needed them.

5. I didn't manage to get a picture, because it was early morning and I was driving the kiddo to school (and even if I'd had the camera, I could not have stopped), but as we drove past the marshy area along the entrance road to my son's school, we saw a beautiful sight: a red-winged blackbird perched on top of the bamboo. I pointed him out to my son, who very kindly agreed with me about the general coolness. I've spotted this particular blackbird several times on the drive into the crowded parking lot and he's on my wish list of wildlife to photograph. That stand of bamboo was really the perfect place for a photograph. Maybe I'll get lucky and capture him, someday. For now, I enjoyed the sight. 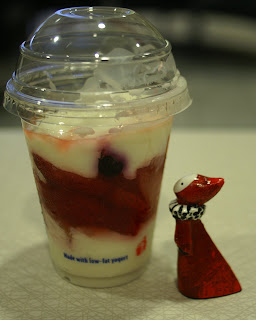 6. I'm grateful for semi-nutritious fast-food options during a week when I'm moody, and . . .

7. A poppet to pose here, there and everywhere. 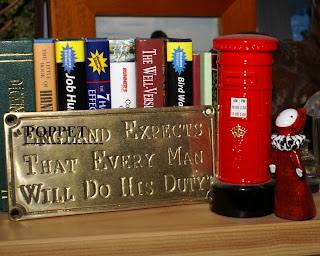 I'm halfway into three books, at the moment. Hopefully, I'll finish one in the next day or two.

May you find many wonderful things to smile about, today and always.

Bookfool
Posted by Bookfool at 9:58 PM