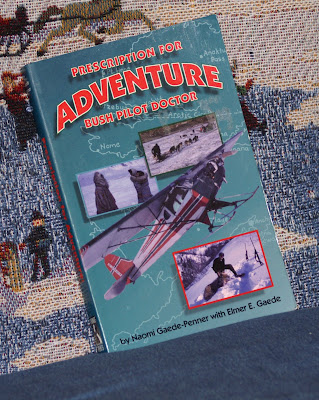 Prescription for Adventure is a book that I happened to see prominently displayed in several stores in their "local interest" section or amongst the tourist items, while I was in Alaska last year. Because I had limited luggage space and wanted to avoid carrying anything overly heavy, I bought a few books but decided to pass on Prescription for Adventure and just wrote the title down. The irrational assumption was that I'd find a copy online either at one of the larger bookstores or at a swap site. I was so wrong. Not only was the book not available at any of the swap or discount sites, but at the time I could only find used copies at exhorbitant prices. I don't know if the book was just out of stock, everywhere, but it took me quite a while to acquire a copy.

Prescription for Adventure is subtitled "Bush Pilot Doctor" because it's the story of the author's father, a doctor who moved his family from Kansas to Alaska in the 1950s to set up practice. Dr. Elmer Gaede originally had hoped to move to South America and thought of his work as a physician as an opportunity to profess his faith; in other words, his intent was not just doctoring but mission work. Oddly, there were plenty of missionaries in Alaska and, once he launches into the story with the family arriving in Anchorage, there is little mention of his faith apart from the occasional comment about God being with someone or prayers for God to help him when something went wrong and he or a patient was in imminent danger (followed by comments about how he was certain that God did, indeed, save his life or that of a patient).

Upon arrival in Alaska, Gaede realized the area was even wilder and more remote than he had imagined. In order to reach many of the small native villages, the only option was to fly. With that in mind, Gaede purchased a float plane and began taking flying lessons. Eventually, as he built confidence, Gaede began to travel on hunting expeditions and to various small towns where a doctor was needed. Because the weather is unpredictable and often dangerous in Alaska, Dr. Gaede had some harrowing adventures.

I enjoyed reading about the more exciting of Dr. Gaede's journeys, for medical emergencies and sometimes for pleasure. What I didn't like about Prescription for Adventure was that the stories often seemed to just end, without a reasonable explanation or conclusion. It's annoying when you're reading along and questions develop, as you read. Questions are what develop the tension, even in nonfiction, and then reading the answers satisfies that hunger for information. Many times, I felt like my questions about a patient or an experience (for example, "Wait! What happened to the woman who had a miscarriage? Did he send her to the hospital? How did her family find out she miscarried while they were away at work and school?") were either glossed over or completely overlooked.

It was also a little unexpected to find that much of the book was devoted to Dr. Gaede's hunting adventures (which I found a little on the offensive side, as he seemed bent on acquiring trophies) and that when he moved his family to Alaska, he told his wife Ruby that he knew she'd adapt and then just left her to deal with the family while he was off exploring. I found that pretty irritating.

Otherwise, the book was grammatically clunky but enjoyable reading. I particularly enjoyed reading about the indigenous natives in remote Alaska; their kindness, generosity, creativity and ingenuity was, I thought, very impressive. And, I do love reading about the tenacity required to settle in Alaska. Not just anyone can drive the family car up from Kansas and start a new life. Alaska's environment is harsh and drives the vast majority of adventurers back home within a year or two. You have to admire anyone who forges a new life and succeeds in spite of storms, the need to ration, and the lack of modern amenities.

3.5/5 - Average writing but definitely worth a read

I decided 3/5 = 60% and 60% is a D (I'm thinking in such terms because of Bellezza's comment about the rating of her blog). Since I consider the book average, not below average, I've upgraded it to 3.5/5. I would have liked to take a red pen to the book and whip it into a little shape (old habits die hard) but the book doesn't deserve a "D" rating merely because it's a little awkwardly written. I checked and it is currently available used via Amazon or half.com.

I finished Pressed Pennies by Steven Manchester, this morning. It's a review book for Estella's Revenge, so I'll post a link when the June Estella has been published.

Hubby cooked all day, Saturday, and was massively disappointed with both the shopping experience ("They don't have this! They don't have that!" . . . "Duh," says the wife) and the quality of food. This is, of course, something I've been complaining about since we returned from Michigan, where the apples are firm and juicy, the blueberries expensive but not coated with mold, the pumpkins fat and pretty on the vine for children to pick on field trips. But, okay, he cooked all day and some of it was pretty good. Still . . . the ingredients were not like this: 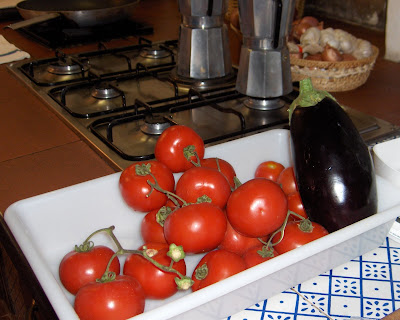 If we had tomatoes that perfect, I'd be out chopping in the kitchen all the time, myself. On a side note, our tomato plants are not producing, this year, and I haven't got the foggiest idea why. Usually, we have tomatoes out the wazoo. They've bloomed, but then no little tomatoes have appeared. Hmm.

School is almost out! Guess what that means for me? I get to get up an hour earlier to drag the kiddo to swim practice 5 days a week. Do you sense the enthusiasm?

Speaking of whom . . . I must dash off to fetch the teenager. Happy Monday!
Posted by Bookfool at 8:08 AM