A Spoonful of Humor by Henry L. Lefevre and a load of the usual babble 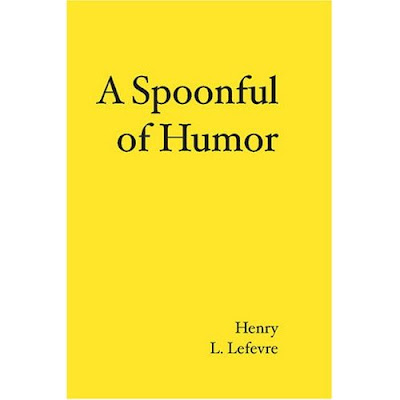 "Never venture outside in your skivvies, and never go anywhere without a good book." That's what my mother told me and mother knew best.
--From "Waiting"

"People have bosses," said Gramps. "Chickens have a 'pecking order'. Bosses and pecking orders are the same thing."
--From "Who's Boss?"

Before I launch into the review, I've got to share a little bit of background. A few years ago, I sporadically attended two writing groups that met about an hour's drive from us - only occasionally, because my car was aging and it had become unreliable enough that I didn't feel comfortable leaving town if my husband was traveling. And, he traveled constantly. Even if I did make it to Jackson, as soon as the meeting was over I'd have to turn around and drive the 55 miles back home immediately in order to ensure that I was back in plenty of time to sit in line and wait for my child to exit his school. It was such a nuisance that I didn't attend very often.

When a wonderful old raconteur by the name of Tex asked me if I'd be willing to read over his memoirs at one of those meetings, I said I would love to. But, thanks to the car problems and mothering obligations, I didn't return to the writers' group for several months. By the time I returned, Tex had had a heart attack and died. I will never see his memoirs.

Henry Lefevre is an octogenarian, just like Tex. He's the friend of a friend and asked if I'd be willing to read his book. The story of Tex is the real reason I immediately said, "Yes! I'd love to!" Henry couldn't possibly know that, nor the fact that I have a fondness for older men. They've seen a lot and they tend to have a fantastic way of looking at life, with humor and levity. I love that. I just love that.

A Spoonful of Humor

definitely has that laid-back point of view I adore. It's a slightly hodge-podge collection, sometimes tongue-in-cheek and other times reflective. The first essay, for example, tells about one of the author's experiences during the early months of World War II, when the biggest problem faced by GIs stationed in Florida was black panthers roaming the swamps. "Black Panther Crisis" describes his experience on guard duty, as he and the other guards frightened off the local critters, endangering their own hides every bit as much as they threatened the wildlife, possibly more. Anyone who reads my blog regularly probably already can guess why that one was a favorite. (Hint: love of memoirs, WWII, wildlife).

In other essays, Henry talks about the hazards of traveling with a bad back, the trouble with Health Maintenance Organizations (HMOs), the generation gap, and life as a latch-key kid in the 1930s (among other topics). My absolute, hands-down favorite is "Dumb Ants", the story of how Henry and his brother John got into even bigger trouble at home after being grounded for exploring a nearby canyon their father had declared off-limits. It is absolutely hilarious. Having raised two boys, I was certainly counting my blessings when I reached the end of "Dumb Ants".

Bibliophiles will find themselves nodding along to Henry's thoughts as they read "Waiting", an essay about the joy of reading books to fill time spent waiting in line or sitting in doctors' or lawyers' offices.

At 83 pages, I should have whipped through A Spoonful of Humor

in no time. Anyone want to hazard a guess why it took me closer to 10 days to read? You'll love this. I couldn't find the Post-it notes or the book darts. There were so many cute one-liners that I wanted to mark, I just couldn't bear to go on reading until I'd located one or the other.

Coming up next: A review of Foreign Fruit by Jojo Moyes, another book that required a decent supply of sticky, removable pieces of paper.

Currently reading: Thirty Seconds Over Tokyo by Capt. Ted Lawson (love those war memoirs!) and The Next Century by David Halberstam (very interesting). I've also just begun Pressed Pennies by Steven Manchester. Hopefully, I'll find the time to put those books in my sidebar soon, but I've been away from the computer because . . .

Oh, no! We decided to replace some of the ugly old particle-board shelves we've had for an eternity. You know, the kind you get when you're young and broke? We bought a narrow cabinet and moved the shelves, only to discover that a portion of the wall the spouse patched up after fixing a broken pipe apparently still had a minor water leak. The wallboard was heavily molded. Come to think of it, maybe that explains the frequency of my migraines; according to my allergist, I'm allergic to "every kind of mold God makes." That wall just happened to be perpendicular to my computer table, so I had to dodge chunks of plaster to get to the computer until I finally got everything swept up, about an hour ago. And, now I have a big hole in the wall. But, that's better than a big splodge of moldy wall-board.

You don't need to know this, but my legs keep going numb when I sit at the computer for any length of time (usually about 30 minutes is enough). I think I need to ditch the dining-room chair and get something a wee bit softer.

Recent screw-up: I dropped by the library sale corner.

Cool find: Inside one of the books I told myself I was definitely not going to buy (even at a quarter each) because I wasn't going to even go near that library sale corner . . . riiiight . . . a recipe for PB & J Muffins. You just never know what you'll find in a used book.

And, another cool thing: Sorry Andi. I'm supposed to contact author Simon Van Booy to interview him for Estella's Revenge, but I had a migraine for several days and put it off. I'm a blithering idiot when my head hurts. Since I found that recipe card, I've been occasionally flipping through other used books as I moved them, this afternoon. Inside one was a card with exactly one word on it, in handwriting that looked very much like my dearly departed grandmother's: "Simon". That's all. Just "Simon". What a bizarre and spooky little reminder. By the way, you should definitely look at Simon's website to see if he'll be touring in your area. And, if you do get a chance to see him, please take your camera. I'm hoping he'll wear that totally hoopty suit.

The hazards of being married to an engineer: While taking a break from cleaning up the mold disaster, hubby and I sat on the couch and chatted. He stood up, I screamed. The reason? The spouse had a mechanical pencil in the pocket of his shorts and as he rose, the tip dragged across my kneecap. After a minute of watching my knee bleed, I sent the husband off to fetch my first aid kit and he promised to try real hard not to keep pencils in his pockets. We both know that's not going to happen, but it's really sweet of him to try.

And, another thing . . . It's apparently not Mother's Day. But, my husband thought it was, so I got a nice little box of chocolates and the movie Music and Lyrics (wahoo!) a week early. At first, I was somewhat horrified because if today was Mother's Day, that meant I messed up. All right! One more week to get that gift into Mom's mailbox. Thank you to God and husbands who don't bother to read the calendar.

Smiles from Bookfool
Posted by Bookfool at 8:56 PM