One for the "If only he'd gone the other way" file: 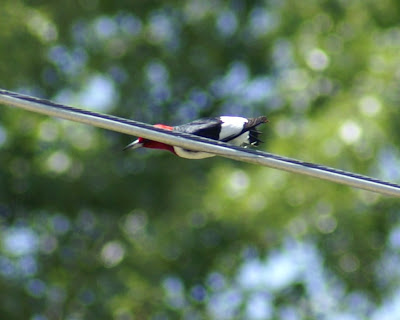 I did manage to snap a photo of the red-headed woodpecker sitting on that wire, just prior to his nosedive, but still . . . it would have been awfully exciting if he'd been on the other side of the line when he took flight.

While eating out after swim practice, youngest son and I spotted a firefighter who looked like Stretch Armstrong before the stretching. Seriously. We did one of those silly dances around each other when I was headed to the drink machine and the firefighter was leaving. You know, where you're both trying to get around each other and saying, "Excuse me," but you can't quite work it out?

Once Stretch Firefighter had left the building, I commented to youngest that I'd never seen anyone quite so muscular in my life. Son said, "His biceps were as big as my thighs. That's unnatural. You think he's on steroids?" I said I think it's a strong possibility.

Not a great photo because they were a bit too far away, but an incomparable sight which I'll call "Pas de deux for red-tail hawks": 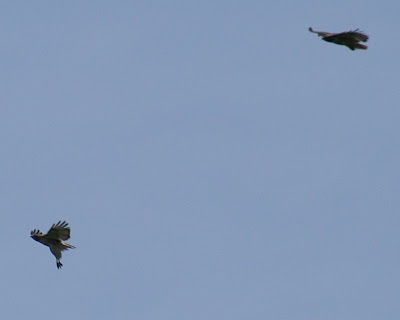 They were circling the trees adjacent to the student parking lot at kiddo's school. This was youngest son's last day of school, incidentally. He said something to the effect of "Yes!!!" when I picked him up. Think he's happy about summer break?

My husband is at a baseball game in St. Louis. Does it seem like he has all the fun, or is it just my imagination? Okay, sure, there are all those wonderful red-tail hawk sightings he's missing out on, but at least he gets to get out of Dodge.

Maybe I'll forgive my husband for planting the ugly pear trees if these turn out as good as they look: 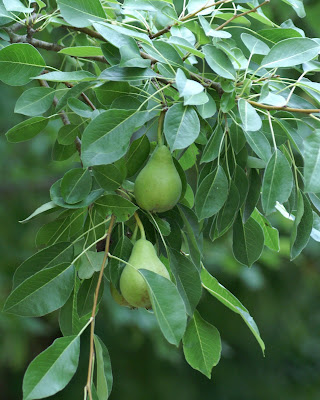 We still don't have a single tomato on our plants, but I noticed we do have plenty of aphids. Maybe that's the problem.

This is unusual for me . . . TV chit-chat for two paragraphs:

I don't usually watch American Idol because it just doesn't keep my attention until they get to the good part with less chatter and more great performances, but I tuned in on the last song sung by both Blake and Jordin and Jordin blew me away. I just loved it when she got all choked up; and, I'd love to know why she did that. Did the song lyrics touch her deeply? Was she nervous because it's getting so close to the end? Did she realize just how fabulous she sounded and get choked up because she knew? Inquiring minds want to know. And, what on earth was up with that Daughtry guy and the eye makeup??

I actually sat still through the show that followed, as well: On the Lot. It had a little of the dog-eat-dog aspect that keeps me away from reality shows, but I think I hung on because the process of film-making fascinates me as much as the end product. I just wish they'd show the short films that got those folks to the lot in the first place. I almost turned off the TV several times, though - every time the host (hostess?) showed up. Wow, was she annoying. Thank goodness she was only on briefly.

My cat seems to be having a serious relapse. She screamed when I picked her up (twice), she's been hiding under the furniture instead of sleeping in the usual napping spots on higher surfaces, and she went outside to lie on the driveway, apparently for the warmth (I was doing housework and had the air conditioner blasting pretty fiercely, at the time), but what's really bizarre is that she didn't want to come inside. Sunshine is usually terrified of the outdoors and only goes outside briefly to munch on weeds. I tried to call the vet but got a busy signal and then passed the veterinarian in traffic. I wanted to shout, "Wait! My cat needs you!" Tomorrow she's probably getting some pills, poor baby.

We're almost out of them, but still enjoying the Kinder Eggs hubby brought home from Europe. I'll have to photograph some of our favorite toy surprises, some time. Hubby discovered Kinder Eggs when he went to Germany (yes, without me - several times, in fact), many years ago. Ask me if I forget easily when the husband goes to the really good places without me. No, don't. You already know.

From my very first photo album . . . Can you tell which of these animals is not stuffed? 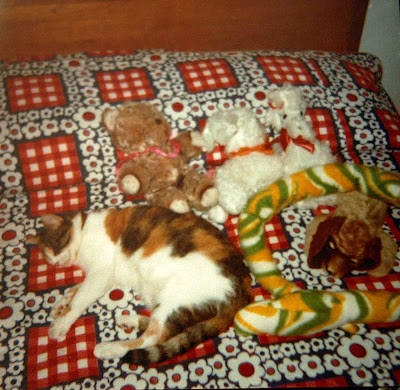 That's my childhood cat, Queenie, on the left. The puppy on the right was my father's toy and I can't remember his name, but he had jingle bells in his floppy ears. The teddy bear came from my grandmother's maternity store (it was musical; I drove my family crazy listening to it at night when I couldn't sleep - I've always been a bad sleeper) and the snake eventually became the mechanism for turning out the bedroom light from the top bunk in my dorm room. That loud bedspread probably goes a long way toward explaining why I turned out the way I did. Not pictured: the red, white and blue beanbag, my early reading retreat. I was mashed in between a wall and the bed when I read, but it was nice and squishy and I was thin. I loved being thin.

Enough chatter. I'm off to have a good soak in the tub. Nighty-night!
Posted by Bookfool at 10:47 PM