Someday, I'll finish that last chunkster and the usual chatter

Angela, aka SciFiChick, and I are in the same boat, this month - balancing perhaps a few too many books at once and not finishing much of anything. I immersed myself in Great Expectations, this afternoon, and still have 100 pages to go. But, I'm absolutely loving it and hope to have a review posted, soon, very soon. I'm also nipping away at Solo Traveler, a book I bought on a whim after dropping the spouse off at the airport (while thinking, "Enough of this being left behind!!) and Dedication by the Nanny Diaries co-authors. I'm enjoying all three. Held at a Distance will not defeat me, but I haven't touched it. Don't tell Andi. Okay, Andi, I'll get to it. Sorry, sorry, sorry.

The spouse has arrived safely in Melbourne, is ensconced in some hotel or other and called me first from:

1. A noisy airplane terminal in Los Angeles, then
2. A noisy baggage claim area in Melbourne, then
3. A noisy hotel lobby.

Seems like this has been a noisy, but uneventful trip, so far. That's good, I think.

Meanwhile, back at the ranch-style home, the kiddo declared himself "completely bored" and fiercely hungry. We trudged (by car - not really so much a trudge as a glide) to the Mexican restaurant, where I discovered that I really like being called amigo. It's a feel-good word, don't you think? And, then, I told youngest son that it would be fine with me if he helped out with the housework. There's no reason to be bored with all that cleaning to do, said I. The teenager immediately declared himself full of ideas for preoccupation. Miraculous.

We were both stunned, shocked, amazed, and many other surprising adjectives, at the fact that I actually managed to get up at 5:30 am - in plenty of time to haul kiddo to swim practice!! Just for the record, I am not a morning person. And, now, at 9:30 pm I feel a bit like this: 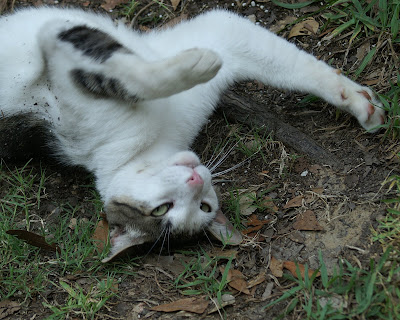 Snuggle's new wild orchid & vanilla Exhilarations fabric softener smells lovely and works great. Fluffy towels, pleasant smell. Since I recently bought some clearance bottles of fabric softener and then brought them home and discovered why they were rejects (the laundry did not smell good - in fact, it was offensive, so I gave away the fabric softener), I've learned to appreciate a light, pleasant scent.

Cascade Action Pacs with Dawn got the dishes clean without leaving a residue.

Aveeno's SPF 55 lotion sample struck me as awfully heavy and strongly scented (it would be heavy, though with SPF 55). And, it made my skin burn. So, that looks like a reject.

Eucerin Calming Creme is light, maybe too light because my skin sucked it right up and asked for more. And, it may have gone off a bit - not sure; it might just be unscented. Sometimes it's hard to tell with lotion.

L'Occitane's Verbena soap is lemony heaven - love it! And the eye cream is soothing.

I was visiting In Spring it is the Dawn and noticed that Nat mentioned to Lotus that she should ask me for tips on nature photography. Which, of course, is nutty because Nat is brilliant. If you haven't seen her iris photos, you must dash right over to In Spring it is the Dawn, right now. But, anyway, I do have a few pointers I could share - just things I've learned by doing. Are you interested? If so, I'll do a post on that, some time.

Gotta go immerse myself in water, soap up, sneak in a few pages and snooze.

Happy Weekend from Bookfool!
Posted by Bookfool at 9:16 PM