The Book of Unholy Mischief by Elle Newmark 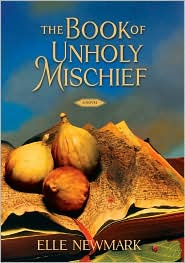 The Book of Unholy Mischief by Elle Newmark
Copyright 2008
Atria Books - Historical Fiction
367 pages
Author's website
Before I review this book, I must mention that the author's website is fabulous. And, if that isn't enough to convince you to visit . . . there's a Dark Chocolate Mousse recipe. Wait! Read the book review before you go off to read recipes, though. I'm not trying to get rid of you.
Now, look at that cover. Doesn't it take your breath away? Even if you're not interested in the story, please walk into a bookstore and take a gander at the whole tamale. The cover of The Book of Unholy Mischief is even more beautiful than you might imagine, with that lovely design extending all the way across the slip cover and gorgeous end papers illustrated with painted mounds of beautiful food inside the hard binding. Actually, I think it would be really hilarious if several hundred people went into bookstores across the country to feel up this book and then told their book dealers, "It's all Bookfool's fault." I'm just thinking with my fingertips.

The Book of Unholy Mischief tells the story of Luciano, an orphaned boy living in the streets of Venice during the Middle Ages. Whilst eating a stolen pomegranate, Luciano is pulled aside by a chef by the name of Ferrero, who takes him off the street, cleans him up and puts him to work in the palace kitchen. As Luciano is swept into the workings of the aromatic kitchen, an intrigue is brewing. Rumors about an ancient book hidden in Venice are growing wilder and life is becoming more dangerous. What is in this mysterious book that people are willing to kill to obtain? And, why was Luciano chosen to work in the kitchen, rather than some other street urchin? What will become of Luciano's starving friends?

The Book of Unholy Mischief is partly a mystery about the missing book, but more than anything it's Luciano's story. It's written in reflection, as he remembers the madness of his time in the doge's kitchen, his love for a young nun named Francesca, his struggles to unravel the mystery on his own while taking care to surreptitiously spirit away scraps of food for his friends. The most outstanding feature of the book is that it's loaded with the senses. Chef Ferrero's cooking is described in steamy detail; you can almost smell and taste his creations.

At the beginning of the story, I actually felt a little burdened by that same depth of detail. I wanted to know about the mystery and sometimes thought, "Just get on with it!" But, there was never a point at which I felt like not sticking it out and the further I got into the story, the more the descriptions (particularly those of the cooking process) intrigued and delighted me. Luciano and Chef Ferrero are wonderful characters. I cared about them and wanted to know what was going to happen. The ending is pretty much spelled out about two-thirds of the way through and what the author revealed wasn't a problem for this reader. I liked the fact that Newmark forewarned readers of what was to come and I found the closing pages of the book immensely satisfying.
Also . . . this is strange . . . Newmark's food descriptions are so tempting and she made cooking sound like such a joy that reading The Book of Unholy Mischief made me want to become a chef. That's particularly odd because if you've read my blog much you'll know that I'm a survivalist cook. If I have to feed myself and my son, I whip something up and get the heck out of the kitchen as quickly as possible. This book reminded me that before I ended up in my current home, I really did enjoy cooking at times. My distaste for our poky little windowless kitchen has led to some serious avoidance, but after reading The Book of Unholy Mischief I was ready to hop a plane to Italy to take one of those 4-day cooking courses. Weird, but a nice off-shoot of the reading.

The mystery in this book is mild, but the assault on the senses is so marvelous that I'd recommend reading it for the experience alone. Since it takes place in the 1498, everything is graphic. When Luciano's stomach is aching with emptiness, you feel his pain. There are violent moments and plenty of horrors in addition to the tempting food scenes. I have a distaste for violence but I never felt totally overwhelmed, although there are some scenes that made me cringe.

It's been nearly a week since I closed the book and it's still sticking with me. I can easily place myself back in the doge's kitchen, in a dark and damp alley or behind a door, watching the wealthy eat and drink their fabulous meals. The more I think about it, the stronger the thought that I want to put that lovely book on my shelf and reread it, even though my initial sense was, "I liked it but I didn't love it." If I were to have rated the book as I closed it, I probably would have given it an "above average" rating of 3.5/5. Now, having reflected a little, I'd give it a 4/5, simply because I liked that unusual stirring of desire to cook and would like to revisit the feeling. Also, I really liked Luciano. He's a great character. I'm really looking forward to seeing what Elle Newmark comes up with, next.

Have you read a novel or cookbook that compelled you to create in the kitchen? If so, please share the title and author's name with me. I'd like to read more books like The Book of Unholy Mischief.

Other reviews (if you've reviewed this book and would like me to add a link, just let me know):