Out of Time by Paul McCusker (review) 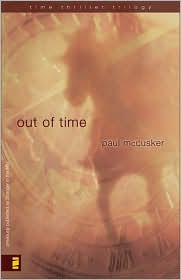 Stop right here! If that cover image appears as vague and uninteresting to you as it did to me, you might just be tempted to ignore the book review. It's funny how much impact a cover can have, for better or worse. I can tell you right now, Out of Time is better than its cover.

Jeff and Elizabeth are driving to their end-of-school dance when a heavy fog descends over the road and a man appears in front of them on horseback. The horse rears up and his passenger goes flying. Oddly, the injured horseman is wearing medieval clothing, carries a jewel-encrusted sword and speaks only in Latin. If what he says is true, King Arthur has been zapped through time, just before his fatal battle with Mordred.

Medical professionals and the local sheriff assume Arthur is crazy, but Elizabeth's father is able to speak and translate Latin and he knows better -- the strange man's mode of speech would be impossible to learn simply by reading books. Could it really be King Arthur? If so, how and why did he travel through time?

Out of Time is the second book in the Time Thriller Trilogy. I acquired my copy to read and review for First Wild and have not yet read the first book in the series, Ripple Effect, although my son has been begging me to locate a copy. I'll tell you about that in the next paragraph. Note that there's a sneak peek chapter just below this entry. You'll find that it's a nice, light read.

When my copy of Out of Time arrived, I offered my son a chance to read the book first because I had plenty of time to get to it. He read it in nothing flat and handed the book right back to me.

We are in agreement: Out of Time is loads of fun. The elements include a time portal that leads King Arthur to step through time, a medieval church moved from England to the U.S., a villain who wants to replace an ancient church with a superstore, and a clergyman is depressed and unwilling to change. There's a great deal of action and adventure in this book. At one point, I thought the faith issue became slightly heavy-handed. Some might consider it preachy when the author begins to veer into the subject of faith. But, Out of Time is less a Christian story than it is a rocking fine little adventure. I gobbled it up almost as quickly as my son and I doubt most people would be offended by the Christian sections. They're decidedly more palatable than a book full of bad language, if you ask me.

Definitely recommended by both Bookfool and Kiddo, especially to those who love time travel and enjoy a nice, adventurous read that isn't too complex.
Posted by Bookfool at 12:01 AM