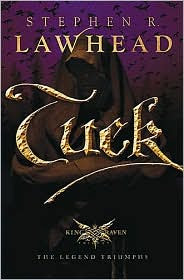 Tuck was a Did Not Finish book for me, but -- this is a big "but" -- the writing is fabulous. The third book in a series about Robin Hood's little band begins with the group walking together on open road. Friar Tuck notices movement in the trees and guesses that an attack is imminent. What follows is a massively entertaining action scene. Check out the sneak peek post, below, if you'd like to dip in and judge the writing for yourself.

Unfortunately, I felt like I was thrown into the middle of the story without a decent context so in spite of the fact that I loved the atmosphere, the writing and the characters, I chose to abandon the book, for now. Sometimes starting in the middle of a series works for me and sometimes it doesn't. I've added the first two books in the series to my wish list and will read them when I acquire the two books, then I'll return to Tuck. In fact, I'm so fond of the writing that I'd like to read everything this author has written, even though I haven't finished the novel.

Wouldn't you know, my library doesn't carry a single one of his titles? It may take me some time to acquire them but based on the first 3-4 chapters, I would definitely encourage anyone who is interested in historical fiction, retellings of legend or the story of Robin Hood to read the free chapter and start from the beginning if your interest is piqued. The first book in the series is Hood and the second is Scarlet.

Note: I somehow messed up the HTML for the sneak peek post and the free chapter was not showing up, earlier. I've just fixed it, so check back if you looked for the chapter and found just a photo of two book covers.
Posted by Bookfool at 1:00 AM

Email ThisBlogThis!Share to TwitterShare to FacebookShare to Pinterest
Labels: books, DNF but advise you to read my reasons