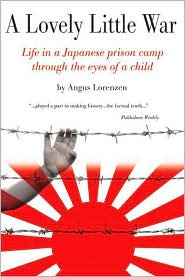 
What led you to pick up this book? WWII is the one war that fascinates me above all others and I particularly love reading memoirs from that time period. This book was also intended to count as my first read for the War Through the Generations challenge.

Describe the book without giving anything away. Angus Lorenzen was born in China and knew it as his home. He and his family lived in a large, comfortable house with servants in Japanese-occupied China (his father had numerous connections in high places, both diplomatic and in business) and didn't even consider leaving the country until danger was imminent. By then, it was too late. Angus, his mother and his sister Lucy made it as far as the Philippines while his father and half brother remained in China.

They arrived in Manila as the Philippine Islands were being occupied by the Japanese and ended up interned in Santo Tomas prison camp, housed on a former college campus that grew more crowded, dangerous, and short of food as time went on. For nearly 4 years, the author's family members remained in the prison camp until they were liberated by American soldiers. This memoir tells the story of their imprisonment as experienced by the author, who arrived at the camp when he was a mere 6 years old.

Describe a favorite scene. The entire book was utterly gripping. I can't say there was a single scene that stands out, merely because the entire tale was so absorbing that I had trouble putting the book down, although the descriptions of how the camp was bombed after they were "liberated" were incredibly vivid. I could practically hear the explosions and the rattle of gunfire. The Japanese had not yet been conquered in Manila when soldiers arrived and there's even a photo that shows the author running into the building where his family was housed as the campus was bombed.

How did you feel about the real-life characters involved in this author's tale? Because the book is told from the author's viewpoint as a 6-9-year-old child, you see everything from his perspective as a youngster. He didn't fully understand the depths of depravity and the horrors of war. Mostly what you get out of it was that he became hungrier and hungrier as the years went by and their rations shrank.

I was really impressed by his mother's ingenuity. She had lived with servants for years, but she figured out somehow that cold cream was edible and used it to fry tinned meat and and [another ingredient I can't remember] into hard tack with their meager Red Cross rations. This and the rest of the rations she doled out carefully -- probably keeping them alive. His brother's story is an incredible tale of escape from occupied China that is so amazing that I think it's worth the price of the book. And the author, although traumatized by his experiences, has dry sense of humor that I found charming. I became quite fond of the author and his family.

What did you like most about the book? I loved the way the author incorporated historical facts into the text without diluting the telling of his story from a child's viewpoint. Really, I loved everything about this book. The story doesn't halt when the camp was liberated. Instead, the author tells how the family was reunited and where they went after the war, then he wraps it up with the tale of his journey back to the campus, 50 years later.

Was there anything you didn't like about the book? There's nothing I disliked about the book, although there was a point at which I realized that because the author was a child and he told his story as he remembered it, I didn't get a true feeling as to just how horrifying the experience was for the adults. But. Big but. There's a photo of prisoners after the liberation and they look just like victims of a Nazi concentration camp, all skin and bones.

With a few photos and some comments about other people in the camp, the slightly skewed perspective of his childish viewpoint is clarified. Lorenzen took care to explain that he didn't experience the horror in the way adults did because he didn't know better. He found ways to entertain himself, made friends, collected shells and shrapnel when the encampment was in the line of fire. He knew the guards had murdered people and were not to be approached, he was uncomfortable from the crowding and ached from hunger all the time, but he still was a kid who managed to find ways to play. It's such a unique viewpoint and story from all of the other WWII books that I've read that I know this book will stick with me for a long, long time.

Anything else worth mentioning? This is off-the-wall, I guess, but as I was closing in on the part where the Americans arrived to liberate the camp and the author repeatedly mentioned the beri-beri from which the prisoners suffered (due to malnutrition), I came to a startling realization. My father may have been nearby.

I know my dad was stationed in Manila during the closing months of WWII, as a navy corpsman on a hospital ship. Although I don't know the exact dates and I think the liberation had probably occurred months before he arrived, I recall him talking about beri-beri. What about beri-beri? I don't know. Did he hear stories about the malnourished prisoners or did he treat some of them? I wish I could ask him. I've seen slides of the hospital ship and of fighting near Manila. My father was a prolific amateur photographer and as children we regularly requested a repeat of my father's wartime slide show . . . which, by the way, is how my parents met. My mother went up to speak to my father after he did a slide show of his war photographs at church. Point being , it really stunned me when I realized to that this author's story and my father's may have intersected at some point.

Recommended? Enthusiastically, yes. Read this book if you like reading memoirs, enjoy reading about WWII or can come up with any other excuse (let's face it; we're really good at coming up with excuses to seek out a new book).

Cover thoughts: I love the cover. The Japanese rising sun is bright and eye-catching, barbed wire symbolizes imprisonment and the child's hand makes it clear that

the book is about a child's experience. It's really quite perfect, in my opinion.

Here's one of my father's photos, which I re-photographed from one of his paper albums while cleaning my mother's house, last year: 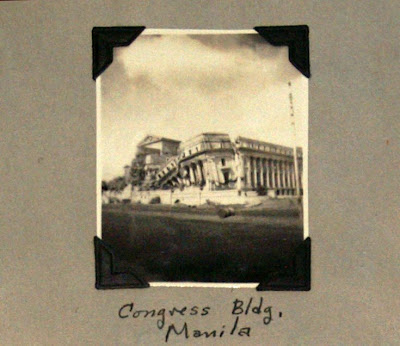