Houston, We Have a Problema 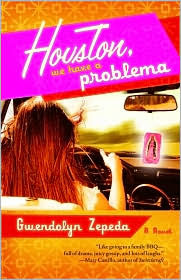 This is almost going to feel like confession time. Wait, let's just go with it. Why not spill a little whilst reviewing the book? Keep reading after the first confession or you'll miss the good part, though, because I enjoyed this book.

Confession #1: I requested Houston, We Have a Problema partly because it was from Hatchette and I desperately wanted to request something from Hatchette, period -- you know, just because I was feeling a wee bit left out with everyone else's blogs seemingly floating away in a drift of Hatchette posts. I liked the sound of the book, too. Don't get me wrong; I did wait till I found something of interest.

The story: Jessica Luna is feeling a little bit lost. First, there was that job that paid badly in a field she loved . . . but it just wasn't enough. So, she's moved on to a job that pays well and it is so spectacularly boring she's not even sure she wants to move up to the next level. Her love life is just as appalling. Her mother and sister are constantly nagging her to find a decent man and settle down. But, do they mean she needs to find a rich white guy, like her sister Sabrina's husband, move into a suburban home and hang out at barbeques with the "pod people"? Where's the fun in that? Is it even possible to find a rich white guy who can dance?

Jessica does have a sort-of boyfriend, a handsome, Latino artist. Then again, there are reasons she's keeping her relationship with Guillermo a secret. It's very possible he's just using her. She loves the spark but they're definitely missing some depth.

In an attempt to figure things out, Jessica goes on frequent visits to the local psychic, Madame Hortensia. Madame Hortensia assures Jessica that good things are in store for her, but none of what she "predicts" is is entirely clear. What on earth do her predictions mean? Will Jessica ever figure out what to do about her job and her romantic life?

Confession #2: I had a terrible time getting into this book. It didn't grab me at all for about the first 50 pages and I was all set to abandon it. Then, I decided that, actually, nothing was grabbing me because my eyes were hurting and I was overtired. On Friday, I decided to go to bed without reading a word. That was tremendously weird. Saturday, I opted to take a second night off. Ugh, ugh. Sunday, I couldn't take it any longer and I grabbed the book closest to the bed, which just happened to be Houston We Have a Problema. Yep, that did it. Sometimes you just have to acknowledge that you need a good night's sleep (or two). I read 200 pages in one sitting. Then, of course, I had to know how it was going to end.

Favorite part: I wish I could quote this part but it's far too long. Near the beginning of the book, Jessica is trying to decide whether or not to go to Guillermo's house. She knows the relationship is shallow. She knows she'll probably just end up in bed with him and then feel guilty. So, she asks for a sign. What follows is a number of signs that pretty much scream, "Don't do it!" Jessica ignores them and grabs onto one little word that indicates she should go. Point being, that's what she really wants at that moment and in the end we all have to make our own decisions. I love that part.

What did I not like? I'm not a big fan of relationship books, but when I do read them I like them to end a certain way and this one didn't have my favorite kind of ending. I'm not so sure that's a bad thing, to be honest. At least it was surprising. Also, some might find Jessica annoying and self-indulgent. I definitely did. But, was there a point? I think so. Jessica was wrapped up in herself, yes, but the fact remains that the book is Jessica's story. The whole point is that Jessica had to figure things out for herself -- that what's not acceptable is to be so self-serving that you hurt other people in the process. Jessica seemed to learn a lesson or two about understanding and eventually she had to make some life-changing decisions.

Recommended? I'd recommend this book to people who like relationship stories. It's not a plot-driven novel; it's about one woman who is conflicted, the people around her and the choices she makes. For the most part, the conflict is internal. If you like a plot-driven novel, this isn't probably the book for you. If you like a relationship novel, go for it. As I was reading this book, I repeatedly thought of Nikki in Italy. Nikki loves a good, juicy story about relationships and I think Houston, We Have a Problema is her kind of book.

Confession #3: I'm really still having trouble with eye strain. I finally gave in and got an eye doctor appointment, today, but it's a little over 2 weeks from now and I'm hoping I won't have to keep taking 2-day breaks. That would suck.

Speaking of which . . . I'd better go get some shut-eye. Nighty-night, book lovers!
Posted by Bookfool at 5:18 PM