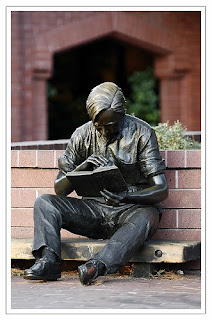 I've been working on a review of Monkey Monkey Monkey, but I had to dig around to locate my poppets and then I had to dig around to find the right camera lens and then I didn't like the photos I took of page spreads. So, I'll do my monkey business tomorrow. Might as well toss in those February reads. I'm only half a month behind. Where applicable, I'll add links to my reviews.

Abbreviations:
NF = Non-Fiction
YA = Young Adult
Ch = Children's
February Reads in Review:
1. A Lovely Little War by Angus Lorenzen (NF) - A WWII memoir by a man who spent several years of his childhood in a Japanese internment camp in Manila. I loved the way he blended his own memories with research to describe the experience from his youthful perspective but within the general historical context of the Pacific War. One of my favorite reads of the year, so far.
2. Lessons from San Quentin by Bill Dallas (NF) - Another memoir, this time by a man who ignored the law as he became wealthy selling real estate and then not only lost his business but also ended up in San Quentin, where he rediscovered Christianity and found purpose. Excellent, if a little repetitive.
3. When God & Grief Meet by Lynn Eib (NF) - A Christian grief counselor describes what she's learned from leading a grief support group. There are some truly jaw-dropping stories of loss and this is an exceptional comfort read for those who are grieving.
4. Houston, We Have a Problema by Gwendolyn Zepeda - Tangled relationships, job angst, parents who appear to be headed for splitsville and a big sister who seems to have it all (but the heroine couldn't bear to live that way, herself). Chick lit with an Hispanic flavor. A fun change of pace.
5. The Giggler Treatment by Roddy Doyle (Ch) - I love Roddy Doyle and laughed a lot, but this particular children's book is about . . . poo. Seriously. The "gigglers" punish adults who've mistreated children by making them step in fresh poo. It's hilarious, but you have to be a little tolerant of all those steaming poo references.
6. Miss Pettigrew Lives for a Day by Winifred Watson - My first Persephone book, a wildly over-the-top Cinderella-like tale of a woman whose sad life takes a happy turn. Originally published in 1938. You can't help but root for the down-and-out Miss Pettigrew. I followed this one up with the movie. The book wins, but the movie is fun in its own way. Absolutely wonderful escapist reading.
7. For Women Only by Shaunti Feldhahn (NF) - A look into the minds of men -- how they think, what they want and need. A surprisingly revealing book that generated some great chats with the hubby.
8. The Book of Unholy Mischief by Elle Newmark - A young boy pulled off the street by a palace chef in medieval Venice and put to work in the kitchen becomes embroiled in the mystery of a missing book and plots of deception and murder. Loads of fun, full of the senses, light on mystery and predictable in a good way.
9. Out of Time by Paul McCusker (YA) - When King Arthur materializes in modern America, he is mistaken for a crazy person. It takes a few Latin experts and a young boy to get him back to his own time and place. My son and I both enjoyed this book immensely.
10. For Men Only by Shaunti & Jeff Feldhahn (NF) - The counterpart to For Women Only, this time a look into how women think and what we want. More fun discussion with the husband, although I'm still waiting for a few things to sink in on his end.
11. Surviving Financial Meltdown by Ron Blue & Jeremy White (NF) - A quick and easy guide to getting yourself out of debt, setting aside emergency money and preparing for the future. Very similar to Dave Ramsey's approach, with a Christian bent.
12. Hate That Cat by Sharon Creech (YA) - A story about a boy who has lost his dog and is none too fond of the neighborhood cat, till he gets his own kitten and discovers the annoying cat might not be so bad after all. Told entirely in verse. Absolutely charming.
13. A Reliable Wife by Robert Goolrick - A dark tale of plotting, poison and desire set during a harsh northern winter. Excellent writing and a gripping tale, although a bit too dark for my taste.
14. I Do Again by Cheryl & Jeff Scruggs (NF) - The true story of how one couple divorced for 7 years after she had an affair (but he didn't know it) and then reunited and began a ministry to help salvage marriages by putting Christ first. Mildly annoying authors; quick read.
15. Word Gets Around by Lisa Wingate - The second in a series of tales set in tiny Daily, TX. This time a screenwriter and a horse-whisperer work to overcome their past disasters and fall in love. Absolutely love this series like crazy. I hope Ms. Wingate keeps it going for a long time.
Not bad for such a short month! Tomorrow, we shall return to our regularly scheduled programming, which means . . . back to March. See you in the present.
Posted by Bookfool at 3:53 PM