Alcohol Today: Abstinence in an Age of Indulgence by Peter Lumpkins (thoughts) 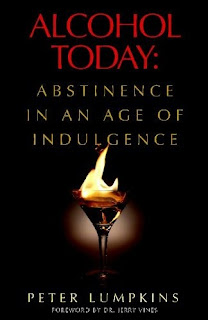 I'm just halfway into this book and not sure if I'll continue to read, so I'm going to go ahead and post my thoughts. The author advocates total abstinence from alcohol as opposed to drinking in moderation and the book is about why he thinks abstinence is the Biblically correct choice.

A few days ago, I mentioned that I think the language makes this book self-limiting because it's written in what I would call "preacher-speak", the language of someone who has been to seminary and knows some theological terminology that isn't naturally known to a wider audience. Last night, I took the time to check for a glossary and there is one, but the word I was looking for, hermaneutics, was not in the glossary.

I looked it up online because I'm a curious chick:

Biblical hermaneutics - refers to the study of the interpretation of written texts, especially texts in the areas of literature, religion and law. (Wikipedia)

Actually, the word itself gives you an idea of what kind of territory the book covers. While at this point (page 76), the author hasn't directly referred to any scriptures that pertain to abstinence from alcohol, his opinion/interpretation is that the Bible is a completely and wholly accurate expression of God's wishes for His people. I'm probably saying that wrong, but the author is a Bible purist, as opposed to someone who believes that some scripture -- like the story of Adam and Eve -- is not strictly historical but more along the lines of mythology to explain early events. The author believes that scripture can answer all questions, even about topics that are not directly described because of the time period in which it was written.

Abortion and cloning are some examples of current topics the author mentions that are not specifically discussed in the Bible because of the time period, but to which he believes the answers of whether or not they're morally acceptable can be inferred from Biblical scripture based on what we know of right and wrong. This is tricky territory. I don't typically share my opinion of what I believe about such things outside my family because they're such hot-button topics and, in my opinion, rather private to the individual.

So . . . back to the book. Because the language is a bit tiresome, the book is a slow read. I do think there are some very interesting sections although, in general, I'm not finding the book as illuminating as I'd hoped. I enjoyed reading about America's Prohibition Period, in particular. The author reminds us that Prohibition is commonly thought of as a total failure. That was certainly my understanding, but he has dredged up some statistics showing that it was actually a success in that fewer people drank alcohol and the troubles that go with alcohol consumption (abuse, fights, accidents) also dropped.

But why abstinence rather than moderation? Well, I haven't gotten to a point at which he actually describes how he's inferred that abstinence is preferable. If you're interested in a glimpse of the author's writing style, check out the sneak peek chapter in my previous post. The author has shared his own story, which obviously informs his own opinion. He grew up in a large, impoverished family and his father always had a beer in his hand. The author started sneaking sips of his father's beer as a very young child and, eventually, drank himself into a drunken state on a daily basis -- while he was still quite young.

Why was I interested in this book? Because I don't drink and I guess I was looking for a better reason than, "Alcohol tastes disgusting." Although, to be honest, I have several reasons. By the time I went off to college, I knew I would never drink heavily because of my migraines. If you've lived with intense headaches for many years, it makes sense not to do anything that will give you a bad headache and everyone's heard of hangovers by the time they get through high school. I wasn't interested in taking myself any further into headache territory. My family was also friends with a man whose alcoholism literally ruined his life and then killed him.

However, the author hasn't convinced me that there's anything wrong with moderation -- yet. In fact, I think this passage reflects an irrational assumption:

. . . to limit the biblical record's application to simply "wine" or even alcoholic beverages for that matter neglects the much larger and desperately needed application to an endless parade of intoxicants whose primary purpose is identical to "wine" -- stimulating pleasure. Incidentally, once again we must remind ourselves, unlike the ancients who necessarily consumed grape products specifically for survival, those lobbying for moderately consuming intoxicants today in the form of drinking distilled wines, beers, and other alcoholic beverages are lobbying for consumption distinctively driven by pleasure alone.

My father would have disagreed with that statement. He had a collection of pretty little crystal wine glasses about 2" deep and each night he sipped about an inch-and-a-half of wine, merely because he read that it was good for his heart. Not everyone drinks for pleasure alone, although I'm certain my father also found his evening wine relaxing.

If you're interested in this topic, I definitely suggest that you read the sneak peek chapter before purchasing this book, simply because I found the writing so heavy that I'd recommend checking it out before buying. I can't rate it, not having reached the end, but I do wish the author had referred to some scripture by this point.
Posted by Bookfool at 10:00 AM

Email ThisBlogThis!Share to TwitterShare to FacebookShare to Pinterest
Labels: Christian/inspirational, DNF so far . . . but that might change, NF