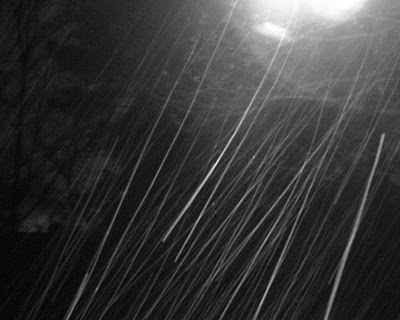 We're still all giddy about our Friday snow, here, even though it was gone by morning (except for a tiny bit in the shade -- which disappeared as soon as the sun hit it). Above is another snow photo - obviously a long exposure and not a very good one, but I like it. I think the photo looks a little spooky with the tree limbs visible in the background.

I was offline most of the weekend because our weather has been changing almost daily and I get change-of-air-pressure migraines, so not much was accomplished in the way of reading or blog writing (and my head is still throbbing), but I've been gobbling up Life After Genius by Ann Jacoby, today. The "genius" of the title, Mead, was a math major before dropping out of college. The math bits go way over my head but the book is nicely written, Mead is a great character, I'm dying to know what happened to drive him away from college . . . and I really want to know whether or not he's having hallucinations. The pages, they are a-turning.

I haven't picked up Can God Be Trusted? for a few days, but I hope to sit down and read some of that, tonight. I did, however, start reading several more books:

(quite a mouthful, eh?) is a tour book. I'm getting out of the blog-touring business, but I signed up for this one because my father was a navy corpsman and for some reason that translates to interest in anything with the word "medic" in it, military or otherwise. Kiddo looked at the title and said, "Dishonor??? What were you thinking, Mom?" Good point. We'll see how it turns out.

- I found this book while cleaning. This seems to be a recent theme in the House of Bookfool: happening across books that I haven't read but which still pique my interest, years after they came into my possession. Drinking the Rain is the memoir of a feminist-writer-professor and tells the story of her time living alone in an island cabin off the coast of Maine without electricity, plumbing or telephone. I don't feel like I can adequately describe the book, just yet, so here's a link to info about Drinking the Rain at Shulman's website, if you're interested.

The New York Times calls Shulman: "The voice that has for three decades provided a lyrical narrative of the changing position of women in American society." Hmm, sounds like it would be a good one for the Women Unbound Challenge, doesn't it? So far, I'd definitely say it's perfect for the challenge. I had no idea I owned a book that would work, but that's okay. I kind of hate challenges.

For another blog tour (this time FirstWild), I'm reading Alcohol Today: Abstinence in an Age of Indulgence by Peter Lumpkins. I don't drink because I never developed a taste for alcohol and, in fact, never could come up with a reason to bother trying. I suppose he's preaching to the choir; but, I was curious to read an alternate opinion about the concept of total abstinence, as opposed to moderation. So far, the book is interesting but I wish the author had considered his audience. He uses a lot of what I'd call "preacher-speak" -- large words, often in the lingo of people who have attended seminary. In its language the book is self-limiting and I can't imagine it finding a wide audience, but I've found the bits about America's Prohibition Period fascinating, definitely worthy of discussion. I think that tour is later this week; I'll have to check my calendar.

I recently finished reading Specials, the third in the Uglies series by Scott Westerfeld. I'll review Specials and The Christmas Secret by Donna Van Liere, soon. The former wrapped up the Uglies trilogy in a way that left me feeling a bit unsettled and the latter is a satisfying Christmas story, sweet and touching.

After several weeks of empty mailbox, today was a banner day. The mailman had to bring the new books to the door. Eeks. I received:

Let it Snow by John Green, Maureen Johnson and Lauren Myracle (Seasonal YA from PBS)
Schooled by Gordon Korman (YA from PBS)
The Last Surgeon by Michael Palmer (ARC from the author - will have a giveaway of this one, soon)
Gabriel Garcia Marquez: The Early Years by Ilan Stavans (I think from Shelf Awareness)
and . . . another ARC I'm not sure if I'm allowed to mention but as soon as I find out I'll tell you. If I can.
Storytime with Bookfool

Last week, I had to run to the doctor's office to nudge the doctor into signing a form that I absolutely had to have completed before he left town. While I waited, one of the receptionists opened up a 3" bottle of concentrated caffeine, guzzled it down and made a yuck-yuck-yuck face. She told me, "That stuff tastes awful . . . and it lingers," but she has successfully lowered her caffeine intake a tiny bit. Till recently she was drinking a Coke with breakfast, a concentrated shot of caffeine mid-morning, another Coke with lunch, a second concentrated jolt at mid-day and a Coke or tea with supper. Everyone in the medical office told her she was overdoing the caffeine. I loved her response: "Listen -- I have three kids, a job and a lazy husband. I need help and caffeine is it!"

I'm off to read. I'll leave you with one last snow pic - poppet Noelle in the grass: 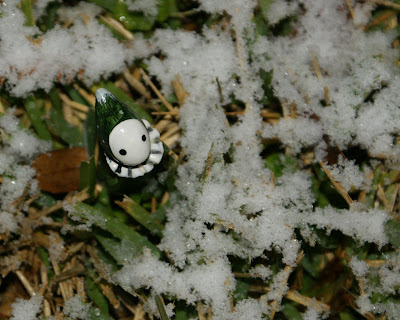 I'm telling you . . . we have to soak up our rare snow experiences!!! Noelle and I worked hard at enjoying ourselves.