Grandma's Shakespeare - a minor disaster and a question about antiquarian preservation

We're doing some major moving of shelves, which involves books, books, everywhere. Bags of books are being donated, things shifted and shoved to make way for the treadmill we bought as a Christmas gift to our fat selves (in the hopes that 2010 will be the year we shrink down to size and get healthy). In the process, my husband decided to get into the file cabinet and dig around. I'd completely forgotten that at some point I put the tiny volumes of Shakespeare that I inherited from my paternal grandmother inside one of those file drawers to keep them out of the light and, hopefully, preserve them a bit. 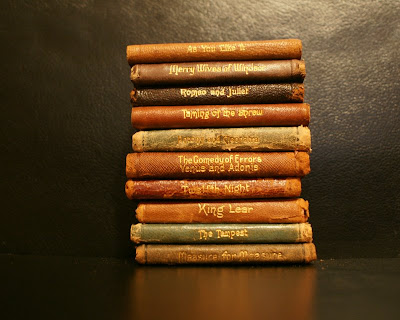 I found four of them on the floor when I walked into the room with the file cabinet, today. One was splayed open across a wrought-iron mirror, another was face-down and open, the remaining two fortunately landed flat. I was so shocked to find them on the floor that I actually gasped aloud. I picked them up, closed them and then asked my husband which file drawers he'd messed around in. He'd been in three out of four -- and couldn't remember which three. That meant I had to go digging for the rest of the books but I finally located them all. Some are in better condition than others. 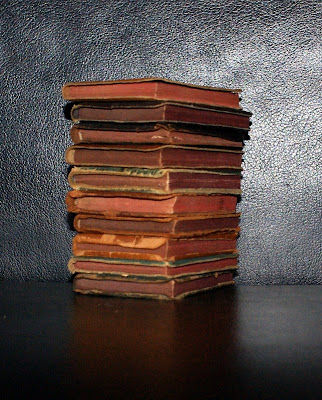 This one seems to be preserved the best: 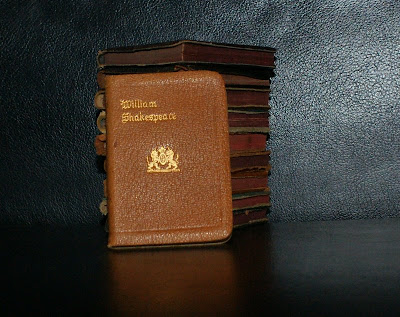 Isn't it beautiful? My grandmother gave me those books about a decade before she died because I mentioned that I recalled reading Romeo and Juliet on the high, 4-poster bed as a child and how much that had meant to me. So, they're very special. I have no idea how old they are because I took this photo and then realized I probably shouldn't be handling the books without gloves. There were already a couple little bits of leather on the floor. I closed it and put them in what I hope is a safe place. 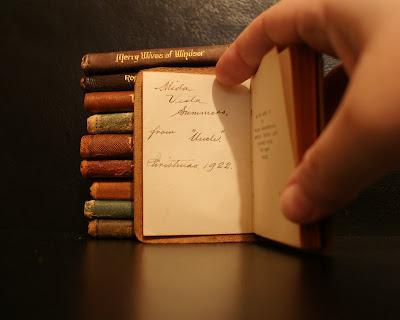 The inscription says Mida Vesta Summers from "Uncle" - Christmas 1922. My grandmother was born in November of 1900 and would have therefore been 22 when she received the books. She was married a couple years later and was apparently a bit of a socialite. "Uncle" could have been a family friend; it's impossible to say, since she's long gone and so is my father.

I'm going to do a little research to see if I can find out how to better protect these little gems. I know absolutely nothing about the preservation of antiquarian books. Do you? If so, please share!