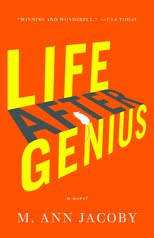 The fact that there's a reading group guide at the end of Life After Genius feels like a big hint, to me, now that I've read the book. Honestly . . . I am aching to talk about this book and wish I had a circle of friends to sit and chat with about it. We would nibble cheese in honor of the protagonist's prize-winning maze, if I were to serve as the hostess. And, then we'd talk about the ending because I've been mulling it for days and no longer consider it tragic but not everyone will probably feel that way.

Life After Genius tells the story of Theodore Mead Fegley. A prodigy recognized for his brilliance from early childhood and occasionally moved forward in school by a year, he's never been surrounded by peers his own age and has been ridiculed, abused and outcast. His cousin Perry sticks up for him, when he can, but Perry's world is completely different from Mead's. Perry's a talented athlete, popular and handsome. Mead envies him but at the same time he keeps his distance from Perry, feeling just a bit inferior in the same way most people feel inferior to Mead in intellect.

Now 18, Mead is about to graduate from college. Just as Mead is preparing to give a presentation on what he's learned about the Riemann Hypothesis, an equation considered unsolvable by mathematicians for over 100 years, he abruptly leaves the university and returns home. Only 8 days remain until his graduation. What drove him away? Is there a chance he will return in time to graduate?

Back home in High Grove, Illinois, he begins working at his father's combined furniture store/mortuary business. Mead is not willing to say why he bolted from the university and refuses to return his professor's phone calls. Because the book is told entirely from Mead's point of view and goes back and forth in time, the story unfolds rather slowly as the reader learns about the anguish of being known as a genius, the one true friendship Mead had but failed to acknowledge until it was too late, and the enigmatic fellow student whom Mead has never quite been able to peg. Was he really a friend or just a user?

The mystery surrounding Mead's abrupt departure keeps the pages turning; and, deeper into the novel the characters around Mead take on growing importance. In the end, though, Life After Genius is still Mead's story. He has always been a fish out of water but a person who knew his passion and pursued it with vigor. I loved Mead's focus and, at times, wanted to slap some sense into him for working so hard that he didn't participate in other aspects of life.

The ending can be interpreted in at least two different ways. It's pretty ambiguous. Have you read Life After Genius? I'm curious what other people think. Do you consider the ending tragic or hopeful? My curiosity has already driven me to peek at a few other reviews -- something I normally don't do until I've written my own. I was particularly impressed with Nicole's scholarly review:

Nicole mentions something that I questioned about the book -- the fact that Mead shows up at home with a broken arm (I was thinking it's his hand or wrist, but now I'm not certain). At some point in the book, I realized he wasn't really acting like a guy with a broken bone. He dug a grave, for crying out loud -- kind of a two-handed job. That's a minor flaw, but it definitely was something that unsettled me.

It's fascinating to me how we often come away from the same book with different impressions. The book is, indeed, tragic in many ways. But, after I gave it some thought I was pretty sure the ending indicated that Mead was finally summoning his courage, preparing to take on life rather than just continuing to hide from the world by burying himself in books.

4/5 - A thought-provoking, beautifully-written book with well-rounded, believable characters. I'm anxious to see what this author comes up with, next.

My baby turned 18, this week. Eeks! I'm getting so old. I received a box of books from a friend (you know who you are!) and when Kiddo was seeking out reading material, I told him he should try Powers by John B. Olson. "I think you'll like it," I told him. He gave me his skeptical teenager look -- boy, does he have that look perfected -- but I handed Powers to him, he read the blurb on the back and said, "Yes."

The next day, he handed it back, finished. Powers was "good", he told me. Translation: "I don't want to say anything you'll quote on your blog, so I'm using a neutral term." So, of course, I asked him if it was just good, really, or did he really enjoy it? . . . because he certainly read it fast enough. "The ending was nothing earth-shattering, but for the type of book it was good. I liked it." That's as far as he would go. I can tell you, though, that when my son reads a book in one night it's one he'll eventually reread. He has to -- I can't keep up with him (and neither can the library, which carries few books that suit his taste), he reads so darn fast.

The Sum of His Syndromes by K. B. Dixon - a slim, quirky book that I absolutely loved. And, of course, this is the one I ordered after turning down the auther's latest book (kicking self). I love the quote on the cover of this book:

"This is the kind of book where we see a bit of ourselves and grimace--but keep reading." A. M. Homes

Yep. Exactly. It's going to be hard to review the book, simply because I'd like to quote at least half of it. But, I'll try . . . soon. I haven't actually done any Christmas shopping, yet, so it's possible I should take a day or two away from the computer to work on that. We do have a tree. It only has two strands of lights that are comically skirting the middle of the tree (because my husband put them on the tree and he has no sense of proportion). That's another thing to work on.

Bookfool, who is in "Oh, no, I haven't even written a single Christmas card or bought a gift and, um, what did we do with the outdoor lights?" mode.
Posted by Bookfool at 3:01 PM