I'm still on a bloggy break until the kiddo returns to school (next week, I assume) but I thought I'd pop in and tell you about some of the books I've read while I've been on my holiday break: 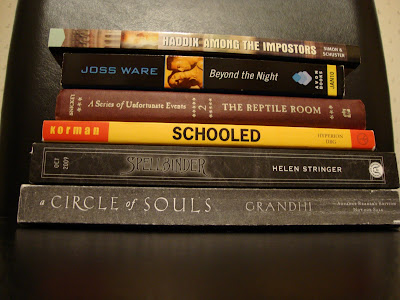 1. Among the Imposters by Margaret Peterson Haddix - The second in a series about a dystopian world in which families are limited to 2 children. 3rd children, known as "Shadow Children" are hidden. In this second installment, shadow child Luke takes on the identity of a deceased child and attends a school where things are not quite what they seem. I enjoyed this one much more than the first, Among the Hidden.

2. Beyond the Night by Joss Ware - A romance set in a future world (post-disaster) with zombies, drug lords and a surprising connection to the past. A small band of men caught in a cave during the disaster have apparently hibernated for 50 years and must learn to live in a new and dangerous world. I don't have the book handy, but it focuses on a particular couple and is heavy on romance but has some interesting twists. Not your typical zombie book. This book will be released January 10.

4. Schooled by Gordon Korman - I actually finished this one before I went on break, but I haven't reviewed it, so I plunked it onto the stack. It's about a teenager who has been raised in isolation by his hippie grandmother, homeschooled all his life, and when his grandmother is injured he has to go to a real school for the first time in his life. He's made class president in order to put him in a tight spot but it turns out he's so innocent and guileless that he manages to become popular. Loved this upbeat, funny YA story.

5. Spellbinder by Helen Stringer - A British YA about a young girl who lives with the ghosts of her dead parents. When the doors between the Land of the Living and the Land of the Dead close and her parents (and all but one ghost in the world) disappear, Belladonna must figure out what exactly is going on in order to save the world and resume her everyday life. She has a little help from an Edwardian ghost named Elsie and a classmate named Steve.

6. A Circle of Souls by Preetham Grandhi - A young girl is brought to the emergency room after a dream leads to not only walking in her sleep but dangerously sleep-climbing in a place where she could have easily fallen to her death. Meanwhile, another young girl has been brutally murdered. When the psychiatrist in charge of the sleepwalking girl's care realizes her dreams are actually psychic images sent by the murdered girl, he connects with an agent in charge of the murder to help her solve it. Absolutely the most gripping book I've read in ages, beautifully written and surprisingly believable for the subject matter.

I've also finished reading How I Live Now by Meg Rosoff, the story of a young girl who goes to England to visit her cousins and then war breaks out. I am currently immersed in Custer Survivor by John Koster and Mr. Darcy's Great Escape by Marsha Altman. I'll tell you about the books I've bought over the holiday (I donated 39 and then went shopping . . . sigh) when I return. I'm just looking at the school calendar and it is truly confusing with all the tiny colored squares but it looks like school resumes on Friday, January 7th. I don't think I'll stay away from the computer quite that long. Kiddo will probably forgive me for posting, some time next week. We shall see.

I hope everyone has been enjoying the holidays. Happy New Year, a bit early!!
Posted by Bookfool at 1:00 PM