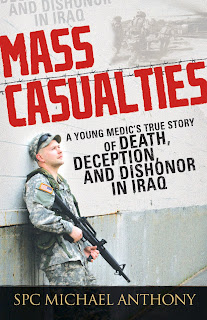 Mass Casualties is the story of a young man who grew up in a military family and signed up to join the U. S. Army as soon as he graduated high school. Because he tested well, Anthony pretty much had his choice of what type of job he'd like to have. He trained to be a surgical assistant because of the above-average pay and signing bonus.

After training, he was shipped to Northern Iraq, where he began to get to know the people he would work with and to learn his job. He was quickly surprised to find that the man in charge of scheduling was a control freak who had no sense of how to create a schedule. During Anthony's first weeks in Iraq, he and several other people were switched from one shift to another on a daily basis. Soon, they were unable to sleep at all, their bodies confused as to when it was time to rest. That poor scheduling was just the beginning of a difficult deployment in Iraq in two different locations with the same wily but inept commander.

Mass Casualties wasn't quite what I expected it to be, but it's an interesting memoir. There's a lot less focus on the surgery Anthony was involved in and the patients than the full experience of being deployed. You do hear about quite a few of the cases he dealt with and how they had to balance the use of a minimal number of surgical space when there were mass casualties coming in. But, the real focus is on relationships, everyday frustrations and and problems with the Army.

What I loved best about the book was that you really get a sense of what it's like to live in a war zone and the immediacy of having to run for a bunker during bombings. The bombings were more frequent and closer -- with bombs actually hitting inside their compound -- than I expected. When bombs were falling, the reading was pretty intense.

I disliked the fact that the author shared graphic detail about the sexual escapades of people around him. Yes, it was part of his experience. But, it's something I avoid reading about and before accepting this book for review, I read some reviews at Amazon. I asked the tour host if the book was as graphic about sex as described in a particular review and she said it was not that bad. I disagree. Mass Casualties isn't a book that can be renamed "Army Sexcapades," but there is a lot about the sexual activity of those around Anthony and anyone who dislikes reading about such things should be forewarned.

In fact, Anthony described all this activity because it was something that upset him. It's against Army regulations for people to engage in sexual activity but it was rampant and a large number of those whom he knew to be having affairs had spouses back home. Anthony was appalled at this behavior and that's undoubtedly why he seems so focused on it, particularly later in the book.

3.5/5 - A solid memoir and exposé of life in the military that looks specifically at the frustrations and issues of life in the army. Points off for going into a little too much detail about the sexual escapades of those around him because some of it was just flat disgusting. Too Much Information. Otherwise, I really enjoyed the book.

I received this book for review from Pump Up Your Book Promotion.

Don't forget! Tomorrow is drawing day for two copies of How to Lower your Cholesterol with French Gourmet Food by Chef Alain Braux. Sign up here, if you haven't already.
Posted by Bookfool at 12:10 AM