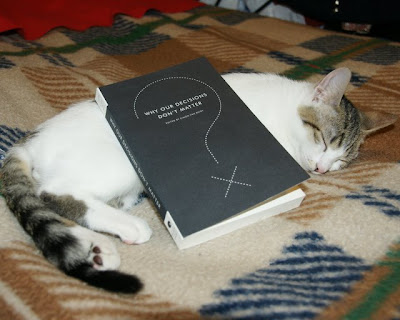 Avoidance: My specialty (at least, after 8 hours of attempting to read on a somewhat continuous basis).
I actually spent nearly two hours not reading, during which I:
1. Cooked and ate something decidedly low in nutrition, high in fat and very tasty
2. Opened the window and waved a plastic bag beneath the smoke detector to get it to shut up because apparently the oven is in desperate need of a cleaning.
3. Fed the kitties some Kitty Crack, aka "Fancy Feast".
4. Played laser tag with both furballs.
5. Danced to the On the Rocks (University of Oregon's a cappella all-male choir) rendition of "Bad Romance".
6. Replied to several email and Facebook messages.
7. Collected on my Mafia Wars properties (it's an illness).
8. Visited a few blogs to see who is Read-a-thon-ing because I neglected to put a link in my sidebar.
9. Watched a video of Kiddo and Girlfriend on a ride at the state fair (I'm guessing Girlfriend's scream is soprano).
10. Dashed out to say, "Hello!" to Kiddo and Husband upon their arrival.

I'm sure there's more. I did, however, manage to finish reading Why Our Decisions Don't Matter, edited by the delightful and dapper Simon Van Booy, once I finally became aware of the clock thingie and how it had continued to tick on without my knowledge.

And, then I played "Stuff On My Cat," as you can see. What's next? Hmm, think, think. I only have one book remaining that is in progress: Nightshade by Andrea Kremer. If it doesn't beg me to read it, when I return to my pillowy reading throne, I shall lop off its head. I mean, I'll decide what to read next when I get there. I'll eventually let you know. Obviously, I'm addicted to updating. And, possibly becoming even weirder than normal. Scary.