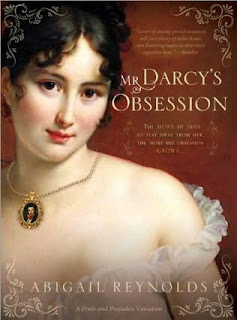 "So you are the mysterious young lady who has been causing such an uproar. Since you are to be part of the family, you might as well call me Aunt Augusta. It is traditional to say it with a certain degree of exasperation."

"Aunt Augusta!" Darcy said. "This is hardly the time."

She pointed at him. "You see, Fitzwilliam is providing a fine example. He has the tone almost perfect. A few more years of practice, and he will sound exactly like his father."

Elizabeth made a slight curtsey. "You will have to forgive me, madam. It is beyond my thespian abilities to seem exasperated with someone I have just met. You will have to do something to exasperate me first."

Mr. Darcy's Obsession is yet another spin-off of Jane Austen's classic Pride and Prejudice, this time imagining a world two years after Lizzy's visit to Rosings -- a world in which Darcy talked himself out of proposing, Mr. Bennet has died, the family estate has been entailed to Mr. Collins, and Jane has married a milliner.
When Darcy finds out about Elizabeth Bennet's reduced circumstances from an angry Bingley, he decides he must find out how she is doing in her new life as governess to her aunt and uncle's children in Cheapside. With that in mind, he journeys to Cheapside and traverses the street without learning a thing, until he meets a little urchin named Charlie.
Charlie is a smart little whippersnapper and he becomes Mr. Darcy's spy, enabling Darcy to renew his acquaintance with Lizzy by joining her for walks in a nearby park (and definitely resulting in the improvement of life for one little street boy). Will Darcy get over his pride and finally give in to his obsession, making Lizzy his wife? What will become of the rest of the Bennet family? And, what about poor Bingley? Will he ever return to London and find love?
To be honest, Mr. Darcy's Obsession is rather predictable after one has read the introductory material and become acquainted with the new background and storyline. Bingley is almost entirely out of the picture, now that Jane has married a much older man and is expecting a baby, but you can easily guess where that's headed. What's unexpected is the new cast created for purposes of changing the storyline. Reynolds has added to Darcy's family and the little urchin he pulls off the street to use as his extra set of eyes and ears is a charming addition.
The bottom line: If you don't mind a change from the original Austen, Mr. Darcy's Obsession is a pleasant, often clever, read and every bit as clean (no more than a kiss is exchanged) as the original. The additional cast adds a completely new dimension to the story and makes it unique. My only complaint is that sometimes I thought Mr. Darcy's intent was a little unclear, but one doesn't have to read far to untangle any confusion. Definitely recommended.
Just walked in:
How to Be an American Housewife by Margaret Dilloway - An ARC passed on by a friend. Thank you, Paula!

Just walked in and out:

Isabel and her slave. We went to get the second half of her shots. Fingers crossed this batch doesn't knock her as flat as the last round.

Because I haven't taken many photos, lately, and some of my favorite shots from vacations are those of total strangers, I decided I'll share one that I love of a family enjoying Trafalgar Square. 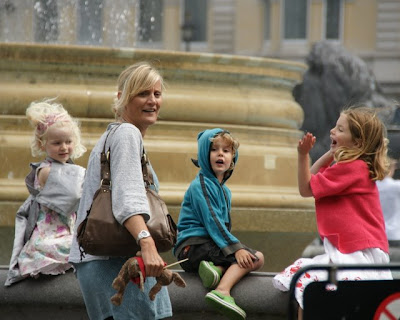 Aren't they lovely? They seemed to be having a very wahooey time. Incidentally, I chose to read Mr. Darcy's Obsession partly for the Everything Austen II Challenge and partly because I enjoyed The Man Who Loved Pride & Prejudice by the same author. I plan to read more by Abigail Reynolds. Mr. Darcy's Obsession is my fourth read for the Everything Austen II Challenge.

©2010 Nancy Horner. All rights reserved. If you are not reading this post at Bookfoolery and Babble, you are reading a stolen feed. Email bookfoolery@gmail.com for written permission to reproduce text or photos.
Posted by Bookfool at 4:14 PM