Before I dive into book reviews for the week, I've decided to go ahead and describe a few books I Did Not Finish (DNF'd in the current slang) and share why they ended up abandoned.

Please bear in mind that there is absolutely nothing wrong with any of these books, even if I mention something specific that stopped my reading. I simply have been trying my best not to allow myself to sink back into a slump and the best way to do that, I've found, is to simply abandon anything that isn't grabbing me like crazy. All of the following titles will get a second chance. I have not abandoned them permanently; they simply either weren't right for the moment or require greater focus than I was willing to devote to them.

The Tower, The Zoo and The Tortoise by Julia Stuart is a book I intended to take along with me to London, for obvious reasons. As it turned out, the book didn't make the final cut when I was choosing vacation reads. And, then I ended up falling into bed exhausted the moment I'd doctored my feet with sticking plasters and antibiotic ointment (oops . . . bad shoe story that makes me blush) in London. So, it's likely I wouldn't have gotten to the book anyway.

However, I did eventually pick The Tower, The Zoo and The Tortoise up; and, it was just not the right book for the moment. At the time, I recall thinking I really wanted to read something suspenseful and taut, instead.

Of Bees and Mist by Erick Setiawan is a totally different story, when it comes to Novel Abandonment Issues. When I picked the book up, it captured me so thoroughly that I couldn't put it down. I read about 100-150 pages in the first sitting. And, then I got busy and didn't read any more for about a week. When I picked up the book, again, I'd forgotten enough of what was going on to totally mess up the fun.

I became frustrated because of that gap between readings and opted to set Of Bees and Mist aside till later. Obviously, this particular case of Did Not Finish was my own darned fault. Like many books that I set aside for stupid reasons, Of Bees and Mist is one that I think deserved my full attention. It's a book I plan to return to when I can devote myself fully to the reading.

Solitary by Travis Thrasher had the misfortunate of hitting the top of the pile when I was still in the midst of my reading slump. I read about 50 pages or so and it didn't seem like anything was happening. But, I'm not sure if that was really the case, since I was in such a "grab me or I toss you" mood, at the time.

Maybe it just wasn't the right book for the moment. It's a YA suspense and I typically love suspense. But, almost nothing was grabbing me, during the week I happened to pick up Solitary. I set aside so many books that week that I can't even remember what all I abandoned. Solitary stands out in my mind because I was looking forward to it and kind of ticked at myself for not being able to get into it.

Wicked Company by Ciji Ware is my most recently abandoned book. I think it may be the fact that it's not only a chunkster but pretty dense-looking chunkster that's putting me off, in spite of the fact that I love Ciji Ware's writing and actually have enjoyed what I read. It's one thing to enjoy the writing and another to want to pick a book up, every time you sit down. This one simply isn't calling out to me, at the moment, but it's about a young playwright who is female, "a love story, and a compelling glimpse into what life was like for a strong and independent-minded woman in an emphatically man's world."

I know I'll come back to this one, hopefully very soon.

I dropped off 30 books at the library, this weekend (donations) and checked out 4 DVDs. I intended to watch Northanger Abbey, last night, but discovered I'd ended up with an older version and I really was hoping to watch the Andrew Davies version. So, I turned that off and watched The Student Prince with Robson Green, instead. 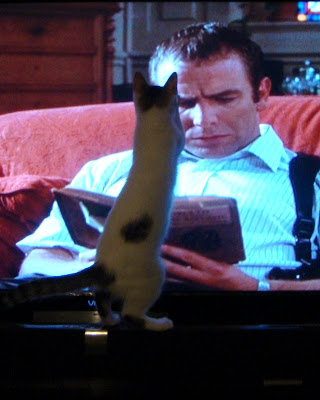 I did watch "The Making of Pride & Prejudice" (the Colin Firth/Jennifer Ehle version) and the Jane Austen bio by Biography, today. More on those, later.

Cosmic by Frank Cottrell Boyce - The story of a 12-year-old boy who looks like he's about 30 and cons his way into a special civilian space flight for kids . . . as the adult chaperone. The cover flap describes the book as "a funny and touching story of the many ways in which grown-upness is truly wasted on grown-ups." Doesn't that sound fun?

Before I bury you in book reviews, I need to make two disclaimers:

Email ThisBlogThis!Share to TwitterShare to FacebookShare to Pinterest
Labels: Some DNFs and Why