Persuasion, the BBC film on DVD 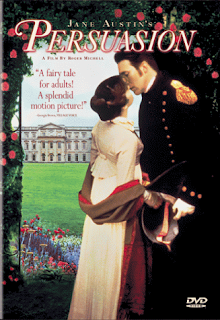 Persuasion by Jane Austen
The BBC production on DVD
Copyright 1995

When I sat down to watch Persuasion, last night, I didn't have the Everything Austen II Challenge in mind, but since watching a video qualifies as an entry in the challenge, you get to hear about my quiet evening watching a DVD with two sleepy kitties curled up nearby. I viewed the 1995 verson starring Ciaran Hinds as Captain Wentworth and Amanda Root as Anne.

Update: I can't believe I didn't even write what the story is about. Anne Elliot is unmarried and now considered well beyond marrying age, having been persuaded to reject Mr. Wentworth (her true love) because of his lack of income, 8 years in the past. Now, her family is on the verge of bankruptcy and when Anne goes off to stay with one of her sisters, Mary, she encounters her former love, now a captain in the Royal Navy. They're at first wary of each other, but tragedy and overheard conversations lead to the kind of ending you know you're going to get with Austen. So . . . back to my "review".

I flipped through 5 of the 6 years of reads in my sidebar and didn't find Persuasion, so apparently it's been more than 5 years since I read the book, which would account for my difficulty in remembering the storyline at the beginning of the movie. I did recall that Anne was considered beyond marriageable age and somewhat sickly-looking and, of course, that she was unable to marry the love of her life. But I couldn't remember why Anne and Wentworth parted.

Fortunately, while the movie is quietly paced and Amanda Root seems a bit devoid of expression a good portion of the time, the look of panic on Anne's face when Captain Wentworth shows up to pay his respects at her sister's house, followed by a conversation in which someone mentions why Anne rejected a completely unsuitable and common sailor (now returned from the first Napoleonic War a wealthy man) cleared things up nicely.

Anne and Wentworth's story is beautifully told in this film. The settings are lovely and the costuming goes a long way toward pointing out personality quirks. There are some nasty women in Anne's family and the outfits the characters wear tend to match their personalities -- Anne's clothing is as understated and demure as she is, while her icky sister Elizabeth's wardrobe matches her loud and offensive personality. I thought the fitting choice of outfits was a nice touch.

As the movie progressed, I became accustomed to Amanda Root and I liked her as Anne but I would have liked to see a little more obvious emotion. Reviews of a 2007 version describe the 2007 as more emotional but less accurate to the book than the movie I viewed. There's always a little give and take, isn't there? The accuracy to the book was admirable in the 1995 version, according to my memory and some comments at Amazon, and I will definitely watch it again and again. But, I'd also like to get my mitts on that 2007 version.

The best part, of course, is when Captain Wentworth signals Anne with a look to let her know he has left her a note -- and the heart-pounding moments as both Anne's and Wentworth's voices overlap in the reading of the note. It's terribly, wonderfully romantic.

Also worth mentioning is Samuel West as Mr. Elliot, Anne's cousin and the potential heir to her family's estate. Every time he showed up, I found myself struggling to remember where on earth I'd seen him. I had a feeling he was in one of the Hornblower movies, because I could visualize him in period costume but still could not place him. Sure enough, he played Major Edrington, a character I absolutely adored in "The Wrong War", an episode of Hornblower. He was also in period costume in Notting Hill, as the actor chatting with Julia Roberts in between the filming of scenes on Hampstead Heath.

Persuasion is my fifth entry for the Everything Austen II Challenge, but I don't feel as if I've finished. I'll ponder for a while. There's more reading I'd still like to do. Incidentally, Miss Fiona spent the better part of Persuasion happily curled on a blanket and Isabel spent the vast majority of the evening on my bed, but did pop by for a visit. Fiona gave the video four paws up -- or would have, if there'd been room to roll onto her back.

I've kept in touch with Chef Alain Braux since reading his wonderful first cookbook, How to Lower Your Cholesterol with French Gourmet Food. Now, he's just released his second book, Living Gluten and Dairy Free with French Gourmet Food. I'm not sensitive to gluten, as far as I know, but it never hurts to find new recipes that are healthy and I'm looking forward to reading the book and giving some of his new recipes a try.

Also, if you haven't already seen them, you really must take a look at author Shannon Hale's beautiful twins.


©2010 Nancy Horner. All rights reserved. If you are not reading this post at Bookfoolery and Babble, you are reading a stolen feed. Email bookfoolery@gmail.com for written permission to reproduce text or photos.
Posted by Bookfool at 12:59 PM