A Memory Between Us by Sarah Sundin 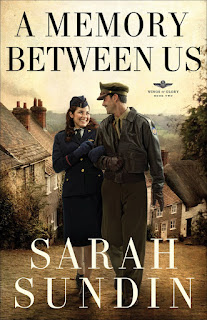 Jack turned right onto Abbey Gate Street, where window boxes teemed with flowers in defiance of the war. Whatever made Hitler think he could defeat the British?

Levitski pulled the mixture control lever on the center console. "Engine three off. Booster off."
Jack turned the ignition switch on the console. "Engine three off."
"Cowl flaps closed."
"Throttle closed. Harv, when you've got a moment, transfer fuel from three to two."
"When I've got a moment? Tell that to Jerry." Harv swung his guns overhead after a yellow-nosed Fw 190.
Jack looked outside. Chaos. Fighters in every direction, hundreds of them. Forts lagging and tumbling, fighters in flames, white American parachutes and brown German ones.

Lieutenant Ruth Doherty has a past and can't forgive herself for the mistakes she's made. Major Jack Novak has his own problems, but he's a man who loves a challenge and Ruth is one army nurse who is about as challenging as they come. Laid up in the hospital after he's wounded in battle, pilot Jack sets a goal to win Ruth over. But, he has no idea what he's up against. Ruth is single-minded, working hard to send money home to her orphaned siblings and not interested in dating because of her damaged past. And, yet, she's never felt more comfortable with any other man.

As WWII escalates and the casualties grow, they need each other even more. But, can Jack overcome his own battle with pride and admit what he wants to do with his life to both his father and himself? And, will Ruth ever let her guard down? Or will the war separate them, forever?

Well, gosh. I just realized how complicated this book is. First of all, there's the WWII backdrop. Jack is pilot of a B-17 Flying Fortress in the U.S. Eight Air Force, stationed in England. WWII is one of my favorite historical time periods and I particularly love England as a setting, so that was the main reason I wanted to read this book. Against this war backdrop is a romance that seems impossible to overcome. The hero is, shall we say, a little on the cocky side? And, the heroine is a wreck. Ruth is determined never to marry or even date. Kissing throws her into total panic. Jack really throws her for a loop.

The seemingly impossible romance between Ruth and Jack takes place over a span of a little over a year, but during that time a lot happens. Jack and Ruth keep things platonic for a while, but now and then he's overcome with the urge to kiss her and Ruth goes ballistic. There is the usual black moment that one finds in every romance and it's a big one. I won't spoil it, but it was a bad enough black moment that I thought Ruth would be crazy to ever have anything to do with Jack, again. But, then, Ruth was a competent nurse but, emotionally, a little off her rocker so . . . lets just cut to the chase.

What I liked about A Memory Between Us:

I loved the historical setting. I thought the author did a pretty good job of giving you that "I was there" sense during the battle scenes,when Jack was flying. I absolutely adored the author's sense of humor; there were loads of light, smile-inducing, clever moments. I loved the nursing scenes, especially when Ruth shifted to a different job. I liked the friendships Ruth and Jack had on the side and how those developed and went through ups and downs. And, while I can't say whether or not the author's battle scenes were accurate, I thought they were suitably tense and mostly believable.

What I disliked about A Memory Between Us:

Ruth had an excellent reason to fear intimacy but I thought the thing she considered her "sin" was not sinful at all. I couldn't understand why anyone would consider what she did unforgiveable. However, I did understand that she was seriously damaged by a horrible experience. I just thought the focus was a little strange and it could have been more believable if handled a slightly different way. That is, of course, merely my humble opinion.

Jack's sin? Sigh. Same thing. I think he had a dilemma he needed to work through about his life and he did make a very serious error in judgment because of something horrible that happened in his past. But, the repetition of the word "pride" just drove me nuts. I thought he was cocky and a little arrogant; occasional use of slightly different wording might have helped.

A Memory Between Us is heavily focused on the romance and yet there are plenty of other things happening to the main characters when they're apart. So, you get plenty of time reading about Ruth's experiences as a nurse and her frustrations when she's paired with a good-looking but lecherous man during her training for a new job to earn more money for her siblings (reading about that new job is particularly fun because it's so interesting). And, Jack's arrogance isn't just the cause of the "black moment". It causes trouble with his best friend and may get in the way of his attempt at promotion if he doesn't get his act together. With the war going on, Ruth and Jack are thrown together, torn apart, thrown together. I found that surprisingly believable.

I had mixed feelings about this book. I loved the setting but I had trouble fully believing the characters could be that distraught about their pasts -- traumatized, yes, but wracked by guilt? I had trouble buying into the sin and pride -- the guilt factors. When it comes to the setting, though, I thought everything was done very, very well. The nursing scenes had the ring of truth and most of the flight scenes did, as well. There were only a couple of times I thought a bombing mission would have been more believable if there'd been a bit less joking around. And, the endings of both stories of the individuals (separate from their romance) were satisfying. Confused, yet?

Well, let me just say this. It's very romantic, very heavily Christian, and seems to be well researched. If you like Christian romance and WWII settings, you'll more than likely enjoy it. There was a lot I liked and a few things that just drove me crazy. One thing, in particular, that just drove me off my rocker was the overuse of the word "groaned". Let them sigh, shake their heads or run their hands through their hair, now and then! The constant groaning just felt lazy to me. And, yet, I loved those battle scenes, Ruth's training, the dynamics between the hero and heroine and their friends and a lot of other side material so much that I'm really glad I read it.

So, I'm going to say I recommend it to romance lovers and WWII addicts, especially those who like a clean romantic read and don't mind a lot of talk about sin and a whole lot of moaning and groaning when the protagonists are frustrated. If you can overlook its flaws, there's a lot to love about A Memory Between Us. I liked it and would read more by the author.

No photos, today! Huzzybuns and I spent half the day shopping for houses. We're still not convinced we want to go into debt, but decided we'd never get anywhere without at least seeing what's out there. We had a good time. After house hunting, we visited Kiddo and took him out to eat and shopping, which is always delightful.

Funny moment: When we were preparing to visit one house, the real estate agent said there was a note to be careful not to let out the hairless cat, Fiona. I told the agent we had a cat named Fiona . . . and an Isabel. She gave me a funny look and said, "The dog's name is Izzy."

That hairless cat was really something. I've never seen one in real life -- just photographs. She was bizarre to look at but a really friendly, lovable cat. And, Izzy the dog -- a bulldog -- was a sweet, shy girl. We had as much fun talking to and petting the critters as we did looking at the house.

Infections and Inequalities: The Modern Plagues by Paul Farmer (from PBS)

Enough for now. I'm typing this late and it's past time for bed. Nighty-night!

©2010 Nancy Horner. All rights reserved. If you are not reading this post at Bookfoolery and Babble, you are reading a stolen feed. Email bookfoolery@gmail.com for written permission to reproduce text or photos.
Posted by Bookfool at 9:15 PM