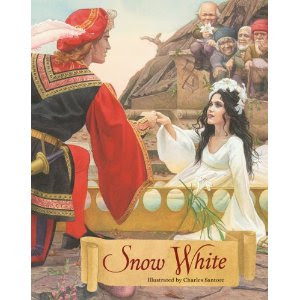 A beautiful queen pricks her finger while sewing in a window trimmed as black as ebony and thinks to herself how lovely it would be to have a daughter as striking as the colors of her blood lying against the snow, framed by the ebony window. Later, she gives birth to a beautiful daughter with ruby-red lips, fair skin and ebony hair, named Snow White . . . and the lovely queen dies.

Snow White's stepmother is vain and has a magic mirror that gives her vanity daily doses of reinforcement when it declares her the fairest of all, till Snow White turns 7 and the mirror says, "Too bad, sucker, you're not the fairest anymore." So, naturally, the evil stepmother-queen decides to have a huntsman kill Snow White and bring back her heart as proof that she's dead. The huntsman lets the young princess flee and brings back the heart of a deer, instead, while Snow White dashes off to the forest and ends up the happy little slave girl to 7 charming dwarves who work in a mine.

Anyone who has been Disneyfied nearly to death -- I couldn't help it; I grew up in the years of The Wonderful World of Disney on Sunday nights -- has seen or read a much-prettified version of this story and, frankly, one that makes more sense.

I just reread this version of Snow White and I'm feeling a little tongue-tied (or finger-tied) but I'll do my best to describe it. Illustrated by the amazing Charles Santore, the best thing about the book is the knock-out illustrations. The tale itself is either the original Grimm's fairytale or an adaptation to fit the size of the book and when I first read it I was baffled. Each time the wicked stepmother-slash-queen attempts to kill off Snow White, the young girl stupidly lets her into the cottage, gets killed, and then is revived by the dwarves until the poisoned apple incident does her in for good and they put her in a glass coffin because . . . well, it's a fairy tale and in fairy tales even dead people can still look pretty and keep on growing.

I suppose the problem I have with the Brothers Grimm version is all that falling down dead and being old enough to know you don't lie dead for hours or years and come back. That just bugs me. In that way, I honestly prefer the Disney version in which, as I recall, she doesn't die repeatedly but finally gets zapped by the bad apple. It makes more sense and it doesn't mislead children into believing it's possible to die and then pop back up looking just as pretty as ever (at least till the end). Plus, I must admit that the way Snow White happily agrees to be the dwarves' household slave is annoyingly outdated. So, it's definitely my preference that a fairy tale is updated in a case in which an older tale has become almost completely nonsensical given the current knowledge.

However, having babbled on about the story, I must say the illustrations are marvelous. On the first reading, I was surprised at Snow White's tender age, but by the end of the book she does appear to have aged enough to marry the handsome prince. You do have to wonder why on earth a guy wants to haul a coffin back to his kingdom, even if the contents happen to be so pretty they make him delirious. In the end, the chunk of poisoned apple falls from Snow White's lips and that is what brings her back to life.

The real fairy tales can be really weird and grim. If you can stand them and don't mind explaining away the weirdness and the reason the young girl is so happy to become basically a young housemaid (she is, after all, under the impression that she'll be safe from her evil stepmother, at first), the illustrations alone make Charles Santore's Snow White a book worth staring at for endless hours. Charles Santore is really a tremendously skilled artist. I recommend that those interested in purchasing classics for their children pick this one up before buying -- look at the illustrations, read through the text and decide for yourself if it's something you could bear to read and explain to your child or someone else's. I dislike the text but love the illustrations, so I recommend it for the illustrations if you're seeking out classics beautifully illustrated, but it's not a favorite.

No books have shown up at my house. Zero, zippo, nada. Okay, well, there was that one book that I bought at Borders, yesterday. I read The Summoning by Kelley Armstrong and it was such a page turner (a Young Adult novel about a girl who inadvertantly summons ghosts) that I rushed to my library to find a copy of The Awakening (book #2). I'm nearly finished with The Awakening and my library sucks, so I went ahead and bought The Reckoning (book #3) on the assumption that I'd want to dive right into the third book and it wouldn't be available at my library. Good decision. Except, I really need to stop and focus on some ARCs because I just found out I'm even further behind than I realized. I've been having fun buddy reading, this past week. The Summoning was a buddy read with Tammy and I'm reading The Ship of Brides with my friend Paula. Well, sometimes you need a break from the ARCs.

But, I'm aware that the further I go, the behinder I get.

Isabel is currently attacking Fiona's tail, which is surprising because she got her last set of booster shots about 2 hours ago and I expected her to be conked out, by now. Fiona is attacking the window. I'm not sure what exactly she's after but it's a wonder she hasn't turned and taken a bite out of Isabel. When we returned from the veterinary clinic, Izzy was still shivering from nerves and Fiona was truly concerned. Fi sniffed Izzy and nudged her a little and then they snacked on kitten chow and all was well. It's those moments of true affection between pets that melt my heart. 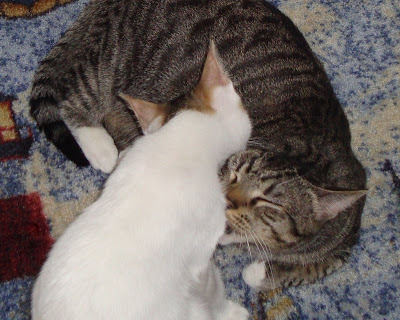 Our Sunshine and Spooky never did get to the point of a mutual groom-fest, as in the photo above, so they're already getting along famously. Except, there's this little wound on Izzy's ear . . . oh, well, I guess they're not perfectly in love but at least they haven't killed each other.

Off to read and maybe will do a second review, later. Yesterday, I went house shopping and we took Kiddo and Kiddo's Girlfriend out for dinner. Fun!

©2010 Nancy Horner. All rights reserved. If you are reading this post at a site other than Bookfoolery and Babble, you are reading a stolen feed. Email bookfoolery@gmail.com for written permission to reproduce text or photos.
Posted by Bookfool at 3:20 PM