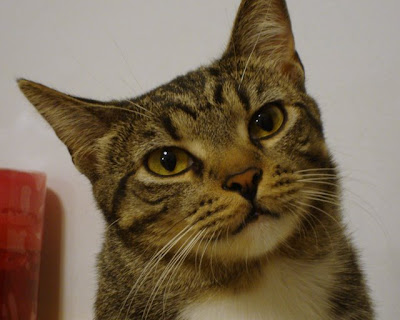 I absolutely love this photo of Fiona because it shows her typical patient, relaxed expression. She is such a lovely cat in both looks and personality. Fiona has continued to grow, since Isabel arrived, and she is a big, sturdy cat, now.

Some of you already know that yesterday was a banner day for our kitties. We've been slowly letting Isabel spend the night outside her room (the utility room) but I was planning to put her to bed in the usual way until I spent some time reading in the bedroom. Fiona was sleeping at the end of the bed on her cardboard scratching pad and it was cold, so I moved her onto the bed. Then, in marched Isabel, once Fiona had finished her luxurious bathing ritual and dropped off to sleep.

Fi was nervous, at first, afraid the little hellion would pounce on her. So, I petted her head and told her, "It's all right." Isabel was obviously tired and ducking in submission. Fiona relaxed and groomed Izzy. Izzy kneaded on Fi's belly a little, feeling instinctively mothered, I suppose. And, then Isabel walked around behind Fi and put both her paws around Fi's neck and groomed her head. Then, she curled up within inches of Fiona. Awww. I can't believe my two kitties have only known each other for about 7 weeks! I ended up letting Isabel sleep outside the utility room and was rewarded with the warmth of two nearby kitties, most of the night.

On the book end of life, I finished reading The Puzzle King by Betsy Carter, Thursday evening. I loved the ending and had to reach for a tissue when I read the brief Epilogue, which touched me deeply.

I'm getting close to finishing Nightshade by Andrea Kremer, a book my son gobbled down in a single evening. It's taken me a bit longer, but I'm enjoying my jaunt into a world of werewolves.

I'm also reading Detectives Don't Wear Seatbelts by Cici McNair, a former Mississippian and world traveler who now owns a private detective agency. And, I started Why We Need Love, edited by Simon Van Booy but the first entry bogged me down. I'm going to get back to that, today. It's an excerpt from Silas Marner and I think I was just too tired for George Eliot's lengthy sentences when I first picked up the book. Oh, and one more -- I started reading Jane Austen Ruined My Life by Beth Patillo, two evenings ago. It's mildly fluffy and totally fun, thus far.

In other news . . . I'm a klutz. No, really. In the midst of the read-a-thon, my husband called to ask me to measure two prints so he could search for frames. I fetched one from the mantle and then climbed on a chair to retrieve the other from the top of a bookcase. I fell off the chair and hit the back of another dining chair, just below my ribs. Yeow. And, then I cut myself while opening a parcel. I was chatting with someone and told her I've become Superklutz and she said, "That's nothing. I sliced my lip open on a popsicle, this morning."

That definitely made me feel better.

Recent Arrivals (both from Paperback Swap):

I tried to write a review, yesterday, and found myself staring at the computer, instead, so I've still got plenty of catch-up reviews to write. Hopefully, next week I'll feel more inspired. At least I'm enjoying the reading.

If you subscribe to my feed, you will have probably noticed a number of posts containing nothing but lists of reads in years past, yesterday or the day before. That is because I just happened to find a stockpile of old calendars and decided to update my sidebar so that you can now peek into my past reading life as far as 1997. I began keeping track of books I'd finished primarily because I was reading a lot of titles by Dick Francis and the titles didn't necessarily have a clear association with his storylines, so I kept accidentally buying them twice. That was sometime in the 90's. During the early years, my reading wasn't always accurately recorded and often I had trouble reading my writing because my calendar was cluttered with children's activities, work schedules, travel notes, running mileage during the years I ran regularly . . . you name it. Sorry about that mess in your readers. Just page past it to get to the normal posts.

©2010 Nancy Horner. All rights reserved. If you are reading this post at a site other than Bookfoolery and Babble, you are reading a stolen feed. Email bookfoolery@gmail.com for written permission to reproduce text or photos.
Posted by Bookfool at 8:26 AM

Email ThisBlogThis!Share to TwitterShare to FacebookShare to Pinterest
Labels: Fiona Friday, likely to melt your brain