Since I'm not quite back in the mood to review, I thought I'd do something different and list a few books that have been calling to me but which I haven't managed to fit into the reading schedule, yet.

Books that are calling to me and finding that they are hollering into a deaf ear: 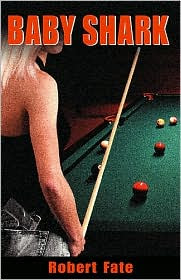 I read Baby Shark's High Plains Redemption in 2008 and absolutely loved it. Shortly after I posted my review, the author sent me an autographed copy of the first novel in the crime series, Baby Shark, with an hilarious inscription based on the fact that the bad guy in High Plains Redemption shared my last name. I've been anxious to read the book ever since, but I keep bogging myself down with review books (yes, in spite of that declaration in the sidebar, I keep taking on review books). Baby Shark is kept on a prominent shelf and it glares at me, now and then. I need to make time to gobble that puppy down. 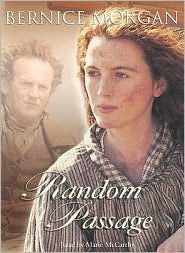 Random Passage is historical fiction set in Newfoundland, a stunningly evocative book I actually began to read and then set aside for a reason that doesn't occur often. It was so good that I wanted to devote myself to it completely. At the time, I was signed up for a Canadian reading challenge. For one reason or another, I kept putting it off until it ended up neatly filed on a shelf. Like the others on this list, I occasionally glance at it longingly and think, "As soon as I stop reviewing books for other people." Hmm, wonder when that will happen? 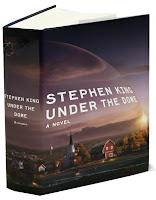 Under the Dome by Stephen King

And, yes, I also need to read The Stand. Confession: I am a sucker for the underdog -- in this case, meaning I like to read books by first-time or lesser-known authors and I tend to avoid those who are making millions, like John Grisham and Nora Roberts (James Patterson, Stephen King, blah, blah) because I figure they don't need me -- although, actually, I've read all of those authors and only one of them thrilled me. But, Under the Dome has appealed to me from the moment I heard about it and I don't let my silly prejudice against filthy-rich authors stop me from reading anything that does, in fact, pique my interest. However . . . it's so big. I mean, Under the Dome is a really, really BIG book and I'm a fairly slow reader. So, it's holding down the table top in our den, just waiting for me to pick it up.

The Ship of Brides by JoJo Moyes

Same song, different tune. I read Foreign Fruit by JoJo Moyes, a few years ago, and absolutely loved it. So I bought The Ship of Brides and The Peacock Emporium. The Ship of Brides is another chunkster but it also happens to be a post-WWII novel and you'd think that would be enough to make me sit down with it. A bunch of military brides from Australia traveling to meet with their husbands in England via a ship full of naval officers? Oh, oh. Want to read now!! But, again . . . fat book, obligations. Maybe if I picked up my computer and dropped it from the rooftop that would give me the reviewing break I need? 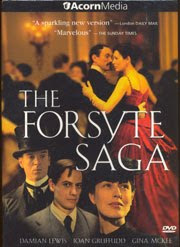 The Forsyte Saga by John Galsworthy

I don't even know where I heard of The Forsyte Saga, although I suspect someone in my reading group mentioned it. After hearing the title, I just happened to find the entire series on DVD in the library. I dragged it home and spent the entire week watching it, little by little. And, then I bought the book. You know the rest of the story. Incidentally, that is the cover of the DVD set but it's the same picture that's on the cover of my copy of the book. One thing I truly loved about the series was the casting. Several actors I'm very fond of were in the series, but The Forsyte Saga also introduced me to someone new to me, the uber-talented Damian Lewis.

Lewis played a particularly nasty character, but he did it so convincingly that I've sought him out elsewhere and have not been disappointed . . . except when he drops his lovely accent -- I hate that. I think there should be an organization devoted to saving British, Australian and other wondrous accents from being mucked up by American roles. Find an excuse to make your Brits and Aussies and Welshmen and Kiwis keep their accents and write it into the script! Are you listening, Hollywood?

Thus, we come full circle to the concept of the deaf ear. But, you never know. Maybe one ear will perk up and save an accent.

Enough for now. There are plenty more books begging me to make 2011 an ARC-free year. We'll see if I bother to listen.

©2010 Nancy Horner. All rights reserved. If you are reading this post at a site other than Bookfoolery and Babble, you are reading a stolen feed. Email bookfoolery@gmail.com for written permission to reproduce text or photos.
Posted by Bookfool at 10:48 AM

Email ThisBlogThis!Share to TwitterShare to FacebookShare to Pinterest
Labels: books and nothing else