2 DNFs - both temporary - and a book I'm loving 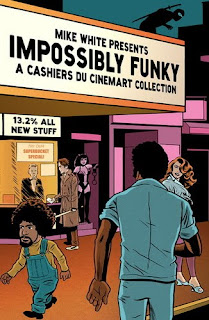 I'm sure you guys are going to think I'm off my rocker when you see the second of these DNFs, but I have my reasons for both.
Mike White Presents Impossibly Funky: A Cashiers Du Cinemart Collection is a collection of writings about film that I'm pretty sure I received from the publisher or author-slash-editor (not positive about that). It looks really good and I enjoyed it, at first, but let me tell you how it starts and why I set it aside.
The first article is about how Mike White observed some very striking similarities between Quentin Tarantino's Reservoir Dogs and an older, lesser known film, City on Fire, directed by Ringo Lam. White claims that Reservoir Dogs is based on City on Fire and made a now-notorious film called Who Do You Think You're Fooling that showed parallel bits from the two movies to show that Tarantino had gone so far as to steal entire scenes.
Because Reservoir Dogs was a huge break-out hit for Tarantino and a money-making, award-winning movie . . . well, he ticked off a lot of people. A lot. The intro and first several articles are about White's attempt to get Tarantino and Miramax to fess up. This involved a lot of phone calls, interviews, acceptance of White's film into the New York Underground Film Festival and a whole lot of denial from the Tarantino/Miramax camp.
The articles are very interesting but there were several in a row and by the time I hit the 4th, I was ready to move on to reading just about anything else but more of the same. I didn't bother to even look to see how much more there was about the whole controversy, White's follow-up film, etc. (oops -- just a whopping 2 pages). I don't like skipping portions of a book, though, so I set it aside thinking, "I'll get back to this one, soon." Well, if you've been watching my sidebar you know Impossibly Funky has been lurking there for quite a while.
There are times that I'll get a mental block about returning to a book and the only way I'll ever get back to it is to set it aside, leaving the bookmark in place (I often don't have any trouble remembering what I've already read), remove it from my sidebar and come back to it in a few months. That's what I plan to do. Now that I've been sitting here flipping through the book, I almost feel like changing my mind and going ahead with the reading. Almost. Not quite. But, I can already say I think it's fun reading if you're a film buff.
I watch movies almost exclusively because I prefer seeing an entire story rather than the bits you see in weekly television (although I make exceptions -- I'm a Michael Westin freak, a Hugh Laurie afficianado, a Chuck obsessive, and I am still waiting for someone to bring Firefly back). But I don't watch obscure films and really don't think you need to in order to enjoy Impossibly Funky.
This is the one that'll make you think I'm crazy. I set aside The 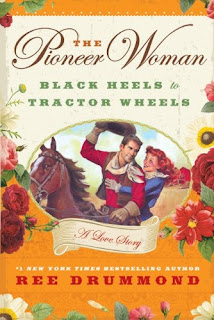 Pioneer Woman's new bio (which I just purchased about a week ago), Black Heels to Tractor Wheels: A Love Story -- at page 225! That is totally unheard of for me! Usually, if I abandon a book, I stop around the 50-100 page range. And, I really enjoyed a lot of what I read. If you've read her blog, you know Ree Drummond is an excellent storyteller with a great sense of humor; she's utterly charming, really.
What I wasn't expecting was that this book would dredge up so many emotions about my home state and how much I still miss home and family (both of my parents and my last living grandmother have died since we moved to Mississippi). Around page 225, Ree and Marlboro Man's wedding was ending and I was in pieces, absolutely sobbing my eyes out. It wasn't just that the romance was touching and lovely and she and her man had these wonderful extended families (which I totally envy) but that it took me back to some very important plans I left behind when we moved out of Oklahoma -- things I haven't figured out how to get back to, in spite of years of trying.
So, do not avoid Black Heels to Tractor Wheels based on the fact that I set it aside. It really is a sweet story of an oddball true romance. I'll probably still manage to finish it, but not this moment. I have to give it some space and time and come back when when I'm good and ready. In case you haven't peeked inside the book, it does include a few recipes. In fact, I considered not returning to the book and put it in my get-rid-of bag. It was Huzzybuns who retrieved it to seek out some new recipes and that was enough to make me rethink getting rid of the book without finishing.
On to other topics . . .
Why Bookfool Deserves a Time-Out:
When I met up with the lovely Amy of Amy Reads on Friday, I had an armful of books because Borders was having one of those terrific $1 clearance sales and there were so many appealing titles -- some of which I've had on my wish list for quite some time -- that my friend Donna (who works at Borders) fetched me a little hand basket and took the books out of my arms so I wouldn't have to haul them around while Amy and I chatted. That turned out to be a mixed blessing. When Borders announced that they were preparing to close, I decided to just go ahead and buy everything in the basket. They were only $1 each, after all. I came home with one heck of a pile and you know I do not need more books. I'm trying to purge, not add to my shelves. But, I came home and looked through them; and, only one book turned out to be a reject. I can always haul that to the homeless shelter store or donate it to the library. No biggie.
Here, the story gets worse. After blubbering about how much I miss home and, gosh, real estate is so freaking cheap in my hometown that maybe I should just buy a house there, my husband decided I clearly needed to spend some time out of the house. Our little cluttered house does drive me nuts. Guess where he took me? Among other places . . . Borders.
Darned if they didn't still have about a million fantastic titles. This time, I sat in the cafe and narrowed down, but not by much. I was getting set to walk back to the shelves when the spouse hustled me to the cash register and out of the store. I'm reading one of those purchases, High Points and Lows: Life, Faith and Figuring It All Out by Austin Carty. I love his down-to-earth thoughts about faith versus religion and since it's a fairly short book I'm pretty sure I'll whip through this one and review it some time soon. Here's my favorite quote, so far:
The one remarkable truth about Christianity is that it's all a matter of heart. You can avoid curse words your whole life, bake brownies every day for bake sales, lead prayer meetings at your house, never touch alcohol, never have premarital sex, and still, if it isn't because you really believe that Jesus is still alive and you love him for it, you're wasting your time. That is the beauty of the Christian religion, and also the rub. Only each individual can determine whether he's committed, abstaining, practicing, etc. for the real reason.
--from p. 3 of High Points and Lows by Austin Carty
Cool. I love that paragraph so much that I handed the book to my husband and asked if he agreed and wasn't that a great way of putting the whole Jesus thing? Nod, nod.
Okay, off to bed with me. All that bawling, last night, has caught up with me. I'm frazzled. I must go bury myself in a book to recover. Nighty-night!
©2011 Nancy Horner. All rights reserved. If you are reading this post at a site other than Bookfoolery and Babble or its RSS feed, you are reading a stolen feed. Email bookfoolery@gmail.com for written permission to reproduce text or photos.
Posted by Bookfool at 7:03 PM