True Grit by Charles Portis - book and the *old* movie 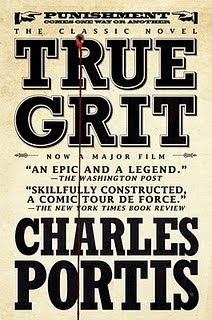 True Grit by Charles Portis
Copyright 1968
The Overlook Press - Western
215 pages
<---My copy doesn't look like that, but I love that cover, don't you?
True Grit is the story of Mattie Ross, whose father is killed by a man he took in and provided shelter and a job. Mattie, of near Dardanelle in Yell County, Arkansas and her father's trustworthy foreman (formerly a slave) travel to Fort Smith --where the two men had traveled to buy some ponies -- to identify her father, collect his possessions and send his body home for burial. But, Mattie wants revenge. Nobody has gone after the killer, Tom Chaney, so she asks around and finds the toughest federal marshal known in those parts, Rooster Cogburn. She wants someone with "true grit" to find Tom Chaney and bring him back to Arkansas to hang.
It quickly becomes apparent that Mattie is one tough and savvy young girl. She's been in charge of the bookkeeping for her father and has a good lawyer, back home, so she has papers ready to sign when she goes in to fetch her fathers "traps" (I'm guessing we'd use the word "trappings", as in possessions) and sell back the gelding ponies he's just purchased. Young Mattie then hires Marshal Cogburn and returns to purchase a pony to follow him into Indian Territory -- for half the price the dealer just paid her. Mattie will make you smile a lot.
Just after Mattie's paid Rooster a down-payment, a slick Texas Marshal named La Beouf (he pronounces his name "La BEEF") shows up. He's looking for Tom Chaney, too. Chaney, also known as Chelmsford, shot a senator and La Beouf is after the reward from his family and the bounty for bringing him in. But, La Beouf wants to take Chaney back to Texas and that doesn't suit Mattie. Instant tension. The two men decide to work together but they don't want Mattie tagging along, after all, even though Rooster has already agreed to let her go. Rooster had backed down because she badgered him so thoroughly.
Mattie immediately proves her determination by fording the Arkansas River on her new pony, Little Blackie, after the two marshals declare her a runaway and have her forcibly removed from the ferry. Will Mattie survive the grueling ride into Indian Territory? Will they find Tom Chaney? Will that crazy, good-looking Texan ever get over himself? Is Rooster too much of a drunk to get the job done?
True Grit, the original film version made in 1969, is an old favorite of mine so I bought the book a couple of years ago when I read a blog review. Till then, I had no idea it was based on a novel. The newer release of the movie nudged me into reading the book and I'm really glad it did. The novel is every bit as entertaining as the old movie and then some (I have not yet seen the new film version, although we do plan to view it) and, of course, goes into much greater detail.
What I loved about True Grit:
The characterization is superb and consistent, the story gripping and adventurous, the dialogue sharp and often amusing. You can't help but root for Mattie. It's obvious from the beginning who it is that really has "true grit".
What I disliked about True Grit:
Only one little thing: The lack of contractions in dialogue, which gets a bit annoying. Otherwise . . . nothing. I was fascinated to find that McAlester, Oklahoma was named after the owner of a store:
From Wikipedia: The town gets its name from J.J. McAlester, who later became Lt. Governor of Oklahoma and was immortalized as
a character in the novel True Grit, which was then made into feature films in 1969 and 2010.
You can read more about the history of McAlester, OK, here.
My thoughts about the 1969 film version of True Grit, compared to the novel: 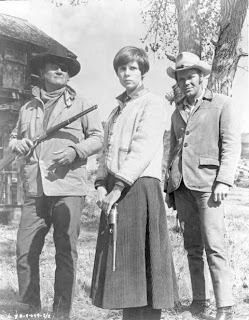 It is always fascinating to read a book and then compare book to movie or novel to screenplay. Much of Mattie's internal monologue was compressed and turned into dialogue at the beginning of the movie to cram in all of the facts as quickly as possible. In the novel, Mattie is an old woman reflecting on her experience but you see events as they unfold in the film and there's no narration.
Events are revealed more slowly, of course, in the novel and Mattie the narrator sometimes jumps ahead to what's happened since. In the end, you known how her life turned out -- and Rooster's and La Beouf's, as well. I'm pretty sure it took about 100 pages before they even made it to Indian Territory, but there's never a dull moment.
Mattie is a mere 14 when the story takes place but actress Kim Darby looks a good bit older than 14 in the movie, in my humble opinion. Glen Campbell and John Wayne truly fit their parts. I don't know that I realized John Wayne won an Academy Award for his role, but I do think he deserved it.
Mattie's mode of speech stands out because of her minimal use of contractions, but La Beouf and Cogburn mix it up a little -- some use of them but not continuous -- so the mode of speech is a little less annoying and more natural in the film than the novel.
Here's what really surprised me about the movie. Having seen it many times, over the years (we own a DVD and I used to watch it whenever it came on TV, as a kid), I was completely stunned to find out that the Indian Territory in which they hunted for Tom Chaney was actually Oklahoma because . . . well, it sure didn't look like the Oklahoma I know, in the movie. Oklahoma is my home state, so I just always assumed it took place in some other part of Indian Territory -- up north. And, of course, the movie wasn't filmed in Oklahoma, as suspected. According to Wikipedia, True Grit (1969) was filmed in Colorado and California. Careful, there are some spoilers in the comparison of book to movie at that site.
There are quite a few lines that are taken directly from the book and a good portion of the movie is fairly accurate, but most of their time in Oklahoma is spent in the snow in the novel and it was sunny, springy and cloudless in the movie until the ending scene (which also isn't accurate to the novel, although I won't mention the differences in those final scenes because some of them might ruin your fun if you read the novel anytime soon).
The bottom line:
Excellent writing with well-developed characters, sharp and witty dialogue and an adventurous storyline make True Grit a winner. No wonder they've made it into a movie twice. Highly recommended. And, I still recommend the 1969 film version. We'll see what Huzzybuns and I think about the newer movie. We're both pretty anxious to see it, now, and agreed that the old movie hasn't lost its spark, now that we've been away from it a while. Lucky Ned Pepper was played by Robert Duvall and "Moon" by a young Dennis Hopper in the 1969 film version. Cool. I had no idea they were in the film.
After reading True Grit, I'm curious what else the author has written and The Overlook Press has published. I don't know if I've ever read anything by that particular publisher, before, so I'll fetch a link. Here you go . . . The Overlook Press. Ooooh, they have tons of P. G. Wodehouse titles, so I already love them!
And, in other news:
Here's your dose of kitty cute - Isabel, on the verge of knocking her rubber ducky into the tub. I bought her a rubber duck because she recently succeeded at fishing my razor out of the tub and she was chewing on it. Yikes! I figured she could use something safer for water play. 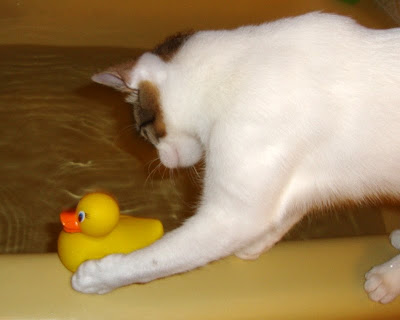 True Grit is the second book I've read for my personal One Shelf at a Time reading challenge. 2 down, 19 to go!
©2011 Nancy Horner. All rights reserved. If you are reading this post at a site other than Bookfoolery and Babble or its RSS feed, you are reading a stolen feed. Email bookfoolery@gmail.com for written permission to reproduce text or photos.
Posted by Bookfool at 8:12 PM