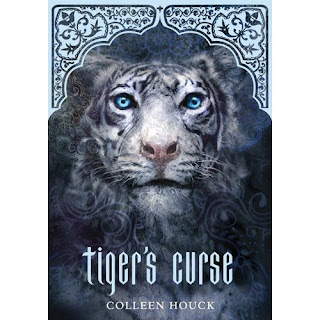 Tiger's Curse by Colleen Houck
Copyright 2011
Sterling - Young Adult
400 pages
Book #1 in a series
Tiger's Curse website
I felt overwhelmed. I didn't expect a first kiss to be so . . . life altering. In a few brief moments, the rule book of my universe had been rewritten. Suddenly I was a brand new person. I was as fragile as a newborn, and I worried that the deeper I allowed the relationship to progress, the worse it would be if Ren left. What would become of us? There was no way to know, and I realized what a breakable and delicate thing a heart was. No wonder I'd kept mine locked away.
--from p. 250 of Tiger's Curse, Advanced Reader Copy (some changes may have been made to the final print version)
When Kelsey takes a temporary job at the circus, she's not sure quite what to expect beyond a little extra money and hard work. What she finds is a family atmosphere and a wide variety of odd jobs that include feeding a beautiful white tiger with stunning blue eyes. Kelsey is entranced by Dhiren (whom she almost immediately begins to call Ren), but she doesn't realize the tiger is no ordinary tiger but a prince who has been held captive by a curse for hundreds of years. Kelsey's presence briefly sets him free -- just for 24 minutes per day, but long enough for him to start down the path that will lead him home.
Unaware that Ren is a cursed prince, Kelsey willingly accompanies the tiger and a man named Mr. Kadam to India. There, they will see the tiger safely ensconced in a nature preserve. Or, so she's been told. But, once Kelsey and Ren arrive in India, things suddenly change. The human Ren appears and Kelsey is shocked to find that he is a stunningly handsome prince and that she is the only person who can help break the curse. And, she must go into the jungle alone, with only the tiger to accompany her.
Will Kelsey and Ren be able to find the clues to break the curse? Or, will Ren's brother, Kishan, find a way to lure Kelsey away from Ren? Can Kelsey and Ren survive the dangers of the jungle and the world of the monkey gods?
Warning: This review contains potential spoilers. Please read it only if you do not plan to read the book right away.
What I liked about Tiger's Curse:
I have mixed feelings about Tiger's Curse; I liked the idea more than the execution of the book. But, before I go any farther, I highly recommend that you visit the Tiger's Curse website (link in the header, above) if you're interested in the book. There, you can read the first 7 chapters of the book and view the trailer. It's the trailer that grabbed me. I've never actually requested a book based on its trailer, till Tiger's Curse. It's one of the most appealing trailers I've ever seen.
Kelsey was a character that I liked immediately because of her spunk. She had almost no fear around the tiger from the beginning, although you get a sense that there's a little magic drawing the tiger and Kelsey to each other. There are some exciting moments but what I liked most about the book was the opportunity to learn a little bit about some sites in India and a smattering of info about the Hindu religion. If you read Tiger's Curse, take the time to look up the various places Kelsey and Ren visit, like Hampi: 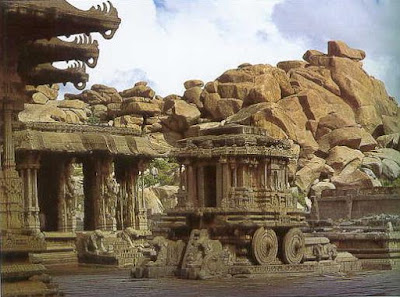 Image Credit
What I disliked about Tiger's Curse:
I might be a little on the picky side but I found the book was almost entirely devoid of conflict and that bothered me a lot. Apparently, the book is a big hit. It hit the #1 spot on Kindle's children's bestseller list for 7 weeks and that led to the print publication. But, I think it might be the tug of romance that sucks in younger readers. I kept thinking of Twilight as I read the book. There's almost no similarity to Twilight beyond the sometimes-gushy magnetic pull between the two characters and the pushing away to prevent heartbreak, but the romance aspect did have a familiar, overwrought feel. That might be a draw for younger readers but I found it annoying.
My biggest problem with the book, though, was that lack of conflict. I'll give you an example that is a bit of a spoiler but not much. At one point, Kelsey is hit on the head by a falling rock. My inner writer immediately thought, "Who pushed the rock from above or threw it?" There was, I thought, a perfect opportunity for conflict. Who would want to stop Kelsey and Ren from breaking the curse? Well . . . if there's a living villain in Tiger's Curse, I totally missed figuring out who it is. Kelsey is knocked unconscious and since she's in the water she nearly drowns. There are a few tense moments, but there's nobody behind that rock. It was simply a rock that fell. Like the falling rock, there are a lot of other little incidents in Tiger's Curse that come to nothing -- too many descriptions with no purpose.
I also thought the author was too easy on Kelsey. Rather than have her forage in the jungle when she begins to run out of food, for example, Mr. Kadam always fills her backpack with everything she could possible need -- food, energy bars, bottled water, first-aid kit, flashlight . . . you name it. And, if she gets low on food? The tiger goes dashing off to find Mr. Kadam or Kadam simply conveniently shows up.
There's a lot of Kelsey waking up, being handed food and drinks, a loaded backpack, even keys to a car when she and Ren inexplicably need to go somewhere on their own, without the aid of Mr. Kadam. I found that frustrating. Tiger's Curse would have been much more enjoyable if Kelsey had to find her own food, deal with injuries without a first-aid kit handy -- sometimes I even wished Mr. Kadam had some hidden evil side, a deep dark secret that would make things suddenly become more difficult. I literally craved conflict.
And, why Kelsey? What was it about her that made her the only person who could help break the curse? Kelsey was babied so much by both Ren and Mr. Kadam in India that she lost the appeal she had early on, when it did actually appear that maybe there was something special about her, something magical.
Kelsey and Ren go to some interesting places and, particularly in the last 100 pages or so, they have some dangers to overcome. But, I just felt like something was missing.
The bottom line:
A romantic quest that takes readers through some fascinating historical locations in India with an interesting fantasy storyline that is generally lacking in conflict, containing flat, awkward dialogue and too-easy solutions. Some danger and adventure perks up the story toward the last 100 pages or so and there are some mysteries that are left unanswered, as well as a little bit of confusion about which brother-slash-tiger is the "good guy" but if I hadn't requested this book and hoped something would improve, I don't believe I would have made it past about page 100. I think younger readers might not mind the lack of conflict because of the romance and the sense of adventure. I would have definitely enjoyed it more at a younger age and particularly recommend it to those who like books like Twilight that lean toward the romantic side.
Would I read the second book in the series? Maybe. Part of me wants to know what will happen to Ren and Kelsey. There are certainly some exciting moments and there's a hint that there may be a dangerous enemy who intends to steal the "Damon amulet". Kelsey wears a piece of the amulet and I can't remember but I think Ren wears a part of it, as well. The next book sounds like it has some potential.
Cover thoughts:
What a stunning cover! The image above looks pretty but in real life the cover is just flat gorgeous. The design at the top is textured silver and the tiger seems to be materializing through a beautiful background that looks like it's part jungle, part cloth with an intricate Indian design. Inside, the patterns continue at chapter headings and even the top of each page. Tiger's Curse is one of the prettiest books I've seen, this year.
My thanks to Sterling Kids for the review copy!
In other news:
We had snow, last night! Or, rather, sneaux. In fact, I began to write this review, yesterday, but I didn't get very far because I had to keep hopping up to look out the window. We were expecting snow or a winter mix around 3:00. At 3:00, it was raining. At 4:00 it was raining. Sometime around 4:30, the air suddenly cooled and the rain turned to sleet within minutes. A few fluffy flakes were mixed in but it didn't really become just snow till full dark, around 6:00 or 6:30. I'm guessing we got about 1/2" of accumulation, maybe a tiny bit more. It was enough to admire but not enough to cover absolutely everything or stick around for long. 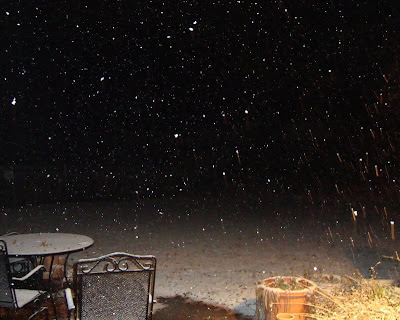 This next picture makes me snicker. I photographed my first snow ghost!!! Okay, yes, I made that up. But, if you look closely, it looks like a man with a mustache. Can you see his face? And, he's reaching for the camera!!! WooooOoooo. 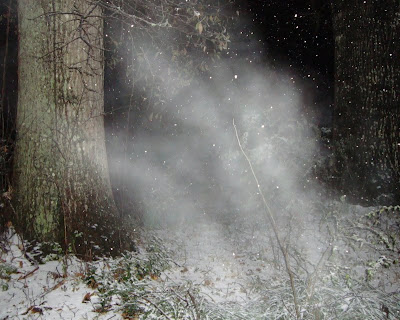 The cats seemed to enjoy the view, this morning:

We're supposed to reach 70 by Thursday of next week, so I'm just going to hold this snow memory close to my heart for a year or two. I think winter is just about done with us.
©2011 Nancy Horner. All rights reserved. If you are reading this post at a site other than Bookfoolery and Babble or its RSS feed, you are reading a stolen feed. Email bookfoolery@gmail.com for written permission to reproduce text or photos.
Posted by Bookfool at 11:04 AM

Email ThisBlogThis!Share to TwitterShare to FacebookShare to Pinterest
Labels: book reviews, Fantasy, Harper YA, recommended but not a favorite, Sterling Books