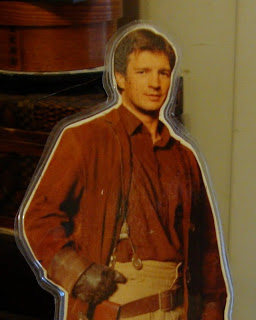 Sometimes, you just need to do something that has nothing to do with books, right? Other people knit or scrapbook, cook or run races. I laminate. And, thanks to an article in Entertainment Weekly that included a nearly-complete, full-length photo of Nathan Fillion as Firefly's endearing former Browncoat, Captain Reynolds, I had a project in the making! I decided to laminate Nathan Fillion and turn him into a standing figure.
Step 1: Cut out the photo of Fillion from EW, leaving a little room for error around the edges with about a millimeter of white edge. I didn't photograph the early steps.
Step 2: Using stick glue, paste the photo to poster board. I put the glue on the poster, rather than the back of the photograph, because sometimes putting glue on the back of a picture can cause tearing, even if you don't get too vigorous with the glue.
Step 3: Wait for glue to dry and then cut out the figure, again with a slight margin for error and with the addition of a wide base for propping (see first photo, below).
Step 4: Laminating plastic and a laminating machine are handy items in this house, since making bookmarks from my own photographs is a personal hobby. There was plenty of extra room to throw in a couple pre-printed bookmarks that have been sitting on the piano, so I tossed in two and waited for the machine to warm up. There's a John Mayer song about this step that you may have heard: "Waiting, waiting to be laminated . . . I keep on waiting, waiting to be laminated." 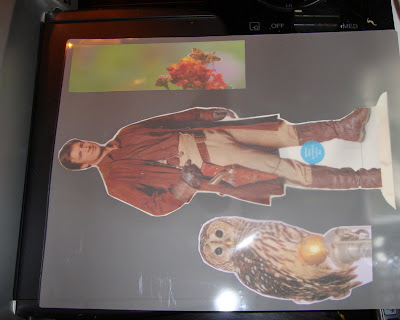 Step 5: Check for proper seal. Oops. When the green "ready" light glows, apparently that does not mean the laminating machine is hot enough. Notice the foggy areas and the halo around Nathan's head? I ran the plastic through two more times before deciding I needed to give the machine 5 or 10 more minutes to thoroughly heat up. 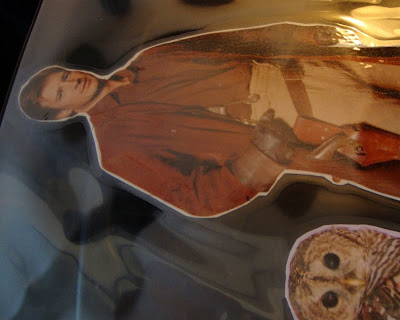 Step 6: Sigh of relief when laminating perfection has been reached. 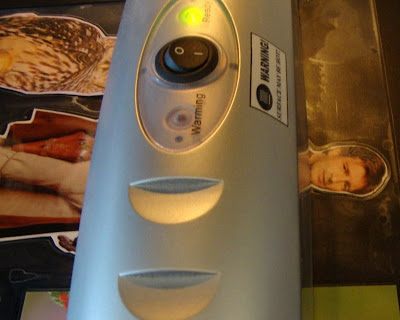 Step 7: After making a third cut around the full figure (leaving a tiny margin around the sealed plastic edge around the laminated item) cut a triangular shape out of poster board. Make it nearly, but not quite, the full length of the laminated hunky subject and fold about 1/4" along the length, using scissors to press down the fold.
Step 8: Glue the folded 1/4" edge to the back of the figure. Note that because there's a margin of clear plastic at the bottom, where the plastic sealed, the poster-board stand is going to show through the plastic just a bit.

Step 9: Before glue has dried, prop up your cut-out figure to make adjustments in case he's leaning one direction or another. I had to adjust mine a few times and then I realized I needed to make a second fold at the bottom in order to get the figure to tip back just a fraction. 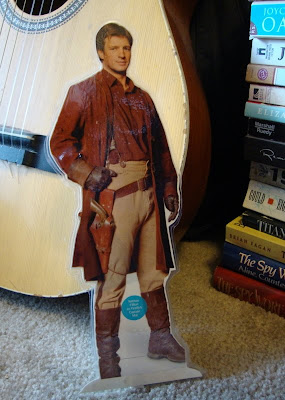 Step 10: Display. If you live in a home with cats, it's probably best to prop your laminated Nathan Fillion in a place the cats can't knock him down or make teeth marks in his head. I photographed him with a fairly neutral background and cleaned the background up a bit, just in case something unexpected occurs and I'm forced to redo the project. Or . . . you never know. I might want to print that photo out and make a Nathan Fillion bookmark.

©2011 Nancy Horner. All rights reserved. If you are reading this post at a site other than Bookfoolery and Babble or its RSS feed, you are reading a stolen feed. Email bookfoolery@gmail.com for written permission to reproduce text or photos.
Posted by Bookfool at 12:01 PM