Quickies! Because somebody needs more Vitamin B (yawn). Brief as it is, my review of Gone may contain spoilers, so skip the first two paragraphs if you plan to read the series any time soon. 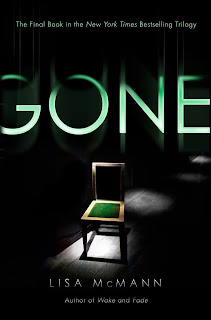 Gone by Lisa McMann (published by Simon & Schuster Teen last month) is the third and final book in the Wake trilogy with heroine Janie and her equally flawed and challenged boyfriend, Cabel. In this third installment, Janie's decision to continue "dream-catching" in spite of the physical damage it will eventually cause comes into question after she meets a dying man. I'm not going to give away who the dying man is, even though you find out near the beginning of the book. But, suffice it to say, Janie's dilemma is a doozy.
I really enjoyed this series and thought Gone was an excellent conclusion. Janie is the child of an alcoholic and Cabel has been through some very serious abuse at the hands of his father. Because of the horror they've experienced in their own homes, Janie and Cabel are very emotional people. As the series progresses, they gradually learn to cope with their inner demons and to trust in others.
All three books are consistent in writing style and pacing. Even though each is nicely wrapped up so that you don't close them with that nasty "cliff-hanger" sensation, I always felt compelled to read on and I'm glad I did. I'll miss Janie and Cabel. I bought all three books in the series. That doesn't happen often, so it gives you a good idea how nicely the author sucked me into the first book.
You can read my other reviews, here:
Wake (Book 1)
Fade (Book 2) 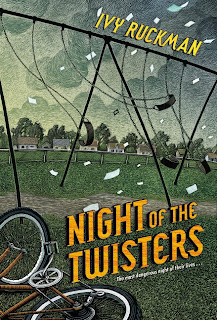 I've been in a reading slump, this week, but the weekend before last, I had a bit of a young-adult/middle reader binge weekend and Night of the Twisters (published by HarperTrophy in 1984) was on the top of one of my stacks. 12-year-old Dan and his friend Arthur are used to tornado warnings in their Nebraska home. Arthur's large family is not originally from Nebraska and they typically ignore such warnings but Dan's mother is a worrier and he's accustomed to sheltering in the basement.
When Dan is left in charge of his baby brother during a tornado warning, he considers leaving the peacefully slumbering child in bed because he has been miserable from teething. But then Dan hears a strange sucking noise in the pipes and decides to take the warning seriously. While Dan, Arthur and the baby shelter in the basement bathroom of Dan's home, the house is ripped away around them. The hours after the tornado are harrowing as they make their way out of the rubble-filled basement then go in search of their families.
Night of the Twisters was almost too realistic for me. Having spent all my life in tornado territory, I've seen the after-effects and spent way too many long afternoons and evenings in bathrooms and hallways. This photo shows the kind of damage described in Night of the Twisters: 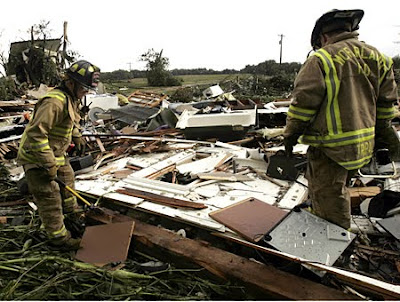 Photo source
I liked the realism of the book, though. Even in places like Mississippi, where tornadoes are pretty common and very destructive, people often ignore warnings until it's too late. Night of the Twisters is certainly a good way to get the "better safe than sorry" point across to youngsters.
Incidentally, that reminds me of my experience seeing the movie Twister. I just happened to view it in a theater in Oklahoma. Oklahoma is right smack in the middle of that part of the U.S. known as "Tornado Alley". A lot of people think they live in tornado alley, but the highest number of tornadoes that form each year form in the mid-sections of Kansas, Oklahoma and northern Texas. Here, might as well show you:

Image Source
Check out that image source if you're fascinated by tornadoes and thunderstorms. It's pretty awesome.
Back to my story about seeing the movie. Because of sheer quantity and excellent weather coverage, Oklahomans are pretty well-informed about tornadoes and how to shelter from them. And, they knew Twister was not realistic, so there was quite a bit of laughter. I can imagine I'd have made a fool of myself watching the movie just about anywhere else but Tulsa.
Anyway, bottom line, both books were enjoyable and I definitely recommend them. Night of the Twisters ought to be required reading in quite a few states, if you ask me.
©2011 Nancy Horner. All rights reserved. If you are reading this post at a site other than Bookfoolery and Babble or its RSS feed, you are reading a stolen feed. Email bookfoolery@gmail.com for written permission to reproduce text or photos.
Posted by Bookfool at 10:01 PM