A Billion Reasons Why by Kristin Billerbeck 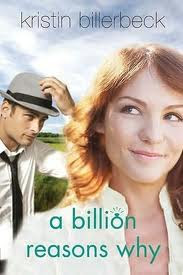 A Billion Reasons Why
By Kristin Billerbeck
Copyright 2011
Thomas Nelson - Christian Chick Lit/Romance
320 pages
I'm going to make this review a quickie because it sounds like the end of the world is happening outside my window, here (big storm -- no lightning or I'd be unplugged).
Katie McKenna is about to get engaged to her boyfriend, Dexter. Dexter is reliable and he wants the same things Katie wants. At least, that's what she thinks until her old boyfriend, multi-millionaire Luc DeForges, walks back into her life. 8 years ago, Luc humiliated Katie in public, back in their hometown, New Orleans. Since then, she's become a special ed teacher in Northern California. Katie's put the past behind her and she's perfectly happy. But, Luc wants her to sing and dance at his brother's wedding. Really, he's trying to lure her to New Orleans but I won't go into the details apart from the fact that she needs her grandmother's ring to get engaged and Luc has it.
Katie has a fascination with the 1940s and she finds herself just a little bit excited at the idea of returning to her old passions, even briefly. But, there are a billion reasons why she shouldn't have anything to do with Luc, again. So, why is she suddenly spotting all of Dexter's flaws and finding herself so magnetically drawn to Luc? What if God wants her to stop hiding her talents and avoiding her passion for the 1940s? Could it be that Luc offers what she's really wanted all along?
Well . . . obviously, this is a romance so you know going into the book just how it's going to end and who the heroine will choose. I've wanted to read a book by Kristin Billerbeck for quite some time because I've read a lot of raves about her Christian chick lit (that's definitely how I'd classify it, although the Christian element is, again, not very prevalent).
Unfortunately, there were a lot of things I didn't like about A Billion Reasons Why. I thought the writing was weak, in general. Conversations that should have been brief and to the point dragged on for pages and were a bit stilted. And, I thought the idea of being "about to be engaged" made no sense, whatsoever. A ring does not a commitment make. A woman's engaged the moment he asks and she says "yes", in my mind.
In spite of all those dislikes, I did like the characters and I loved Katie's obsession with the 1940s. During the first half of the book, it seemed like it was taking forever for the author to explain the past -- what Luc did to humiliate Katie, what happened to her father, why Luc had her grandmother's ring. But, once those answers were revealed, I did like how it came together.
Also, I've always found myself drawn to the 1940s, its movies and clothing, the way people spoke -- and especially the strength of people dealing with WWII. Nice suits and hats!! Why can't we bring back hats on every head?! Okay, yes, they mush your hair.
I did think the whole New Orleans thing was forced--meaning, it seemed like the author went out of her way to try to make it sound like she knew New Orleans when, in fact, I was almost immediately convinced she just thought it was a cool setting. I looked up the author's bio and found out she's a 4th-generation Californian. I guess that means I've been in the Deep South long enough to recognize someone trying to "write Southern," as opposed to writing by a genuine Southerner.
Anyway, I liked A Billion Reasons Why enough to read to the end because sometimes it's just nice to read something a little light and predictable. but, I won't go out of my way to read more books by Billerbeck because I didn't like the lengthy, repetitive dialogue. However, the fact that the book is dialogue-heavy did make it a quick read and it was definitely good timing for a breezy read. I've been a tiny bit slumpy in recent weeks.
Recommended for romance lovers, in particular. A clean, sweet romance.
You can read a free chapter of A Billion Reasons Why here.
©2011 Nancy Horner. All rights reserved. If you are reading this post at a site other than Bookfoolery and Babble or its RSS feed, you are reading a stolen feed. Email bookfoolery@gmail.com for written permission to reproduce text or photos.
Posted by Bookfool at 6:01 AM