The Photo Album by K. B. Dixon 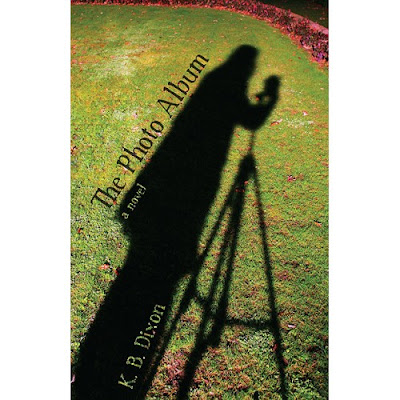 It's taken me a long time to get around to reviewing The Photo Album, but fortunately K. B. Dixon's books are unforgettable. The Photo Album is the third of his books that I've read and I absolutely loved it. Each page is about a different photo and describes what the photo is about or what his purpose was in shooting each photo.
Here's the great thing about The Photo Album, though: There are no photos. Each "photo" is merely an empty rectangle. While the fictional narrator describes these imaginary photos, you're learning about his life, the personalities of the people in his neighborhood, and the various events happening over the span of time during which he took the photos (including the disappearance of a teenager and the search for him). Some descriptions leave more to the imagination than others. For example, Plate 24 (p. 25 of The Photo Album):

As a rule I try to keep my postproduction manipulations of the image to a minimum. I will crop, I will adjust both white balance and color, I will sharpen, I will occasionally do a little burning and dodging--that is about it. I have never been able to fully equate technical manipulations with imaginative ones. I would say about half my photos are virtually untouched--like this table of tangerines.

By the end of the description (and that quote is page 25 in its entirety), you know the imaginary photo is a "table of tangerines," but that is all you know. Are the tangerines spread across a table, still in a bag, placed in a bowl or bowls? Is the table bare wood or covered with a tablecloth? Is the photo a close-up or a wide view? That's all left entirely to your imagination.
In some "plates", the narrator doesn't tell you what you're looking at, at all. Instead, he may say he was trying to show you a scene in abstract and you're left to imagine what he's chosen to portray abstractly. In other photos, you are told about the personalities of the subjects in great detail or given another little glimpse into their characters, as they've been described beneath various other "plates" throughout the book. One character is a friend of the narrator but at the same time the narrator finds him maddening. He may have been my favorite.
There were times I found myself chuckling out loud. Here's one example, Plate 50 (page 53):

This is a portrait of Jeff Tinter and his chicly distressed and be-stickered suitcase. He is one of those fidgety itinerants who is always going places, meeting people, having experiences. He is the sort of person Amy envies and who I feel I am expected to envy, but who, in fact, I habitually suspect of having some sort of psychological disorder. A serial obsessor perpetually on the run from boredom, he thinks of himself as a romantic figure, a modern-day maverick. I was once stuck in an elevator with him for almost two hours. He told me a whole lot more than I needed to know about Alaska.

Highly recommended for literature fans, particularly when you desire to read something different and surprising. Unexpected, imaginative, quirky, smart and funny. At a mere 125 pages (some of which have only a single line of text), The Photo Album is a very quick nibble of a read but one you'll want to revisit. I didn't mark any quotes (the two above were pulled out at random) because I zipped through the book, simply enjoying where it took me, but Dixon has an excellent vocabulary and next time I read the book I'll keep track of the vocabulary words I have to look up. I always learn something when I read K. B. Dixon.
Just walked in:

Time Scene Investigators: The Influenza Bomb by McCusker & Larimore (from Paperback Swap).
Masses of people are dying from a mysterious flu. While the TSI team searches for a cure, a notorious eco-terrorist group, Return to Earth, uses an influenza bomb to poison the water. It's a race against time--with the outcome impacting the entire world.
I read McCusker & Larimore's first book, TSI: The Gabon Virus and enjoyed it. This one seems rather timely, given the recent halt of research on a particular strain of influenza virus because of concerns that it could be used by terrorists.
In other news:
I had to drop by the gym to exercise early yesterday, instead of going at my usual time, because I had an errand to run. So, I ended up having to share my personal trainer with another woman. As we were talking, she mentioned that she's employed at my husband's workplace and I asked her which division she works in. She told me and it happens to be my husband's division, so she asked me who my husband is. I told her and she said, "He's a good guy. But, don't tell him I said that. Tell him I said he's a bag of dirt." Then, she reminded me how adorable Kiddo was as a baby, with his red hair and chubby legs and "that hat you used to put on him."
I went home and told husband, who was home for lunch, who I'd run into and that she told me to tell him he's a bag of dirt. He grinned and said, "Yes. That's our relationship." Boy, I wish I could be a fly on the wall in my husband's office, sometimes.
About to finish:
Empire of the Summer Moon by S. C. Gwynne - An exceptional read about the downfall of the Comanche Indians and their last chief, Quanah Parker, the son of a chief and a captive white woman. It's taken me a long time to read this book because of the violence but it's worth the time. I may have to look for something sweet and light to recover from the reading.
©2012 Nancy Horner. All rights reserved. If you are reading this post at a site other than Bookfoolery and Babble or its RSS feed, you are reading a stolen feed. Email bookfoolery@gmail.com for written permission to reproduce text or photos.
Posted by Bookfool at 2:15 PM